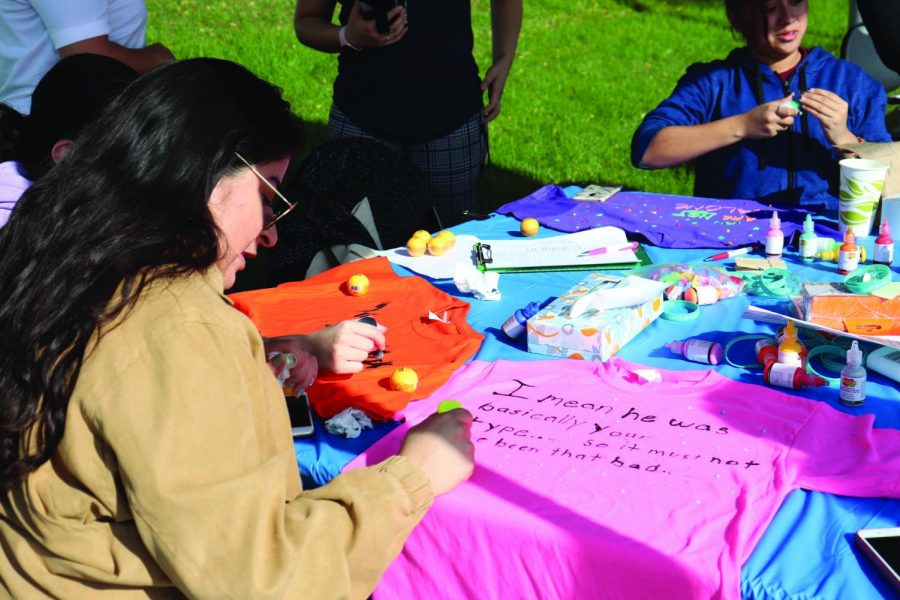 Cerritos College students were given the opportunity to create their own shirts for The Clothesline Project, a movement created to bring awareness of sexual violence. They had the choice to leave the shirts so they could be displayed in April for Sexual Assault Awareness Month, or take them on Dec. 10, 2019.

In an effort to prepare for Sexual Assault Awareness Month at Cerritos College in April 2020, the Office of Human Resources and Title IX is setting up early booths so that more people can participate in the Clothesline Project.

With this being one method of sexual assault prevention and awareness, students are encouraged to stop by and utilize paints and T-shirts to create their own messages in support of victims and/or have their voices heard.

Human Resources employee Kamisha Sullivan said that they began asking students to participate in November, as to have more time and more shirts to share come April 2020.

She said they would have opportunities in December and January.

“You can make [a shirt] and take it, or leave it with us with your contact and we’ll give it back to you in April,” said Title IX Deputy Kamisha Sullivan.

She said the turnout has been good so far, having received a couple of dozen shirts.

Angel Gray, a campus victims advocate and confidential resource for faculty and students, said that students feel comfortable and like they can open up at these kinds of events.

She went on to say that this project provides confidentiality and an outlet to express themselves in ways that they might not have been able to in the past.

Journey Maybury, kinesiology major, said, “This event definitely needs to be had way more often, especially around different schools [as] a simple outlet to allow people to express all that they’ve been through.”

Her shirt full of colorful and multiple messages grabbed the attention of curious students lingering around.

Cerritos College plans to display their Clothesline Project and host other events pertaining to Sexual Assault Awareness in April 2020.