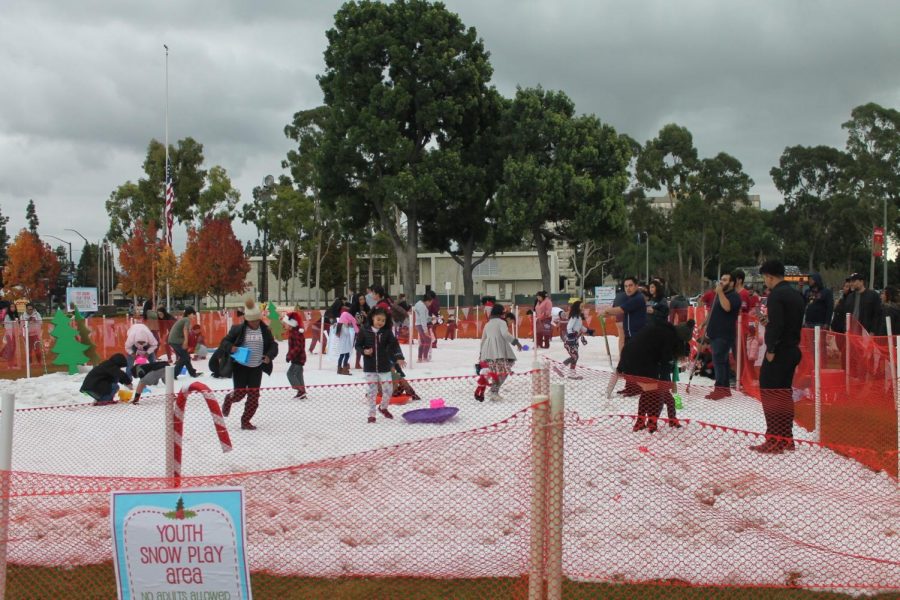 The Norwalk Snowfest provided a variety of games and live entertainment for all attendees to enjoy, including a tree-lighting ceremony and the chance to see Santa Claus. Children played in the snow in a designated youth snow play area on Dec. 7, 2019.

The city of Norwalk celebrated the annual snow festival for its community on Dec. 7 at Norwalk City Hall, which included a variety of entertainment and games for all families.

To end the snowfest, they lit the Christmas tree at 6 p.m. with a snow globe giveaway which in order to participate you had to be 14 years old or younger.

One of the games that were at the snow festival was Snow Slide. which in order to get in, you had to be 12 years old or younger. Adults were able to slide with children.

Rose Romero, 50, worked at the snow fest as security. When she was asked for the reason of the event she replied, “The reason is for children to go out and get excited when Santa claus comes at 6. The city does this to get the family united and have some fun.”

Romero also said, “This event was free for all residents and non-residents from Norwalk to enjoy.”

The snowfest also had face painting, a snow play area, arts and crafts, Inflatable Snowglobe Races and many more.

The Palafox couple, both about 50, attended the event because they said that their nephew told them to go with him and their family since they were leaving to Mexico soon.

Leticia Palafox of the couple said, “This event is very beautiful and it can unite families and be fun.”

“In Mexico there is nothing like this, so I really enjoy this opportunity to see this amazing event,” she continued.

Before the Christmas tree lighting there were Christmas dances and also a choir singing Christmas songs to make the event more energetic and to entertain the people that attended.

Fausto Limon, 29, attended the event with his family. They decided to attend just to enjoy family time and to see what is out in the community.

When Limon was asked what games or entertainment he participated in, he replied, “We were in the snow section and practically in all sections for children.”

“The game that we all liked was the snow section because the kids were free to play and have fun,” Limon said.

When he was asked about why this event had been created, he said the following, “The city cares about their people and having some fun for the family.”

The next opportunity to attend the event will be December 2020.