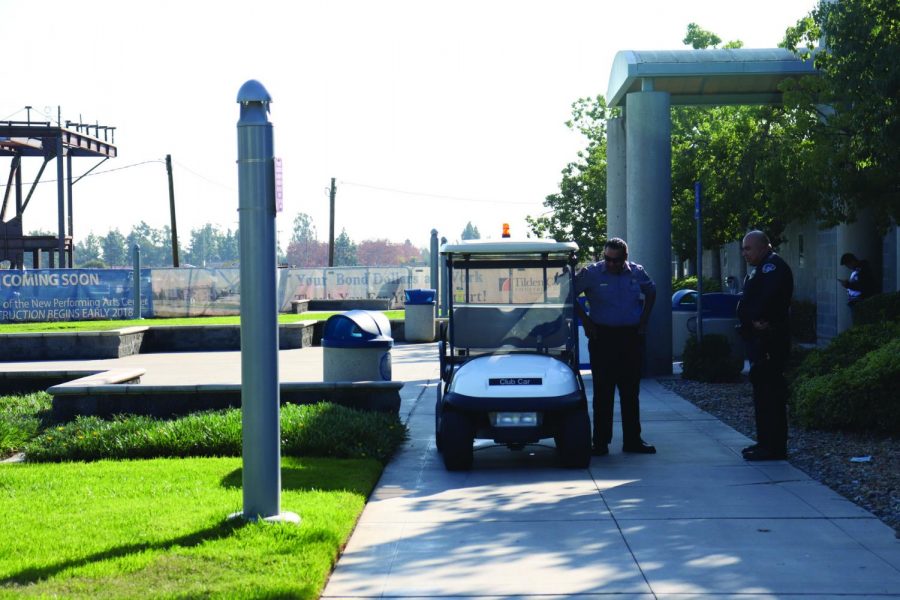 The Cerritos College Campus Police increased its presence on campus following a suspect's threat that stated the campus would be bombed on Monday. Cadets and officers were stationed at intervals across campus, to ensure student peace and safety on Dec. 9, 2019.

Cerritos College officials are on defense as student complaints and questions are on the rise following the handling of an unsubstantiated and non-credible bomb threat reported on Dec. 4 at approximately 6:25 p.m.

A campus-wide notification was sent out via Rave Alert, an emergency messaging system used by the campus, on Dec. 5 around 11 a.m., notifying the public of graffiti in the men’s restroom in the Multipurpose Building allegedly saying that the school “would be bombed” on Dec. 9.

Campus police and cadet presence increased on that Monday for “peace of mind” according to Thomas Gallivan, chief of campus police. Cadets and police were seen monitoring men’s restrooms around campus throughout the day.

Cerritos College Campus Police vehicles were stationed around campus, being seen in Lot 4 and in between the Physical Science and Technology and Math and Computer Information Sciences buildings.

Following the previous bomb threat scare in September that made the school shelter-in-place for approximately two hours and the delay in communication that day, Cerritos College students expressed their anxieties and concerns on the recent situation and being notified a day later.

“I’m very disappointed in our school system. I would think that this college would be really on it,” Roven Matilla, media studies major, said. “The bomb threat [notification] being a day late is unacceptable and unreasonable.”

According to Cerritos College officials Jose Fierro, Felipe Lopez and Gallivan, it was a matter of investigating thoroughly and not wanting to create a panic on campus amongst students.

President Fierro said the alert was not sent out earlier to mitigate the risk of anything interfering with the campus police investigation.

“The response time is something determined by our police department, they have to make a judgment call to provide support and safety to campus,” he explained.

According to the Cerritos College Emergency Operation’s Plan, the use of the alert messaging system is limited to crisis and urgent conditions that “in the judgment of the President or Superintendent or designee, warrant immediate or other notification to the [college] community.”

Lopez, vice president of business services, said that there is no set time frame in which Rave Alerts are sent out.

He said it could take several hours, days or even weeks.

“It’s an uneasy thing but we don’t want to overreact or underreact,” Lopez said, “Our goal is to put out information as quickly as we possibly can.”

Chief Gallivan emphasized the importance of “due diligence” regarding possible threats made to campus as to not cause anxiety prematurely. He said if there is no immediate threat, there is no urgency in sending out a notification.

Vice President of the Associated Students of Cerritos College Nathan Williams said he understands the need to not cause a panic; however, verified information should be sent out sooner rather than later.

As far as who is responsible for sending out the Rave Alerts and deciding when, Gallivan said it is a “team effort.”

He sent out the Rave Alert on Dec. 5 and the following alert on Dec. 6 deeming the threat as non-credible.

On most occasions, he said it is either him, Fierro, Lopez, or public affairs who send out the alerts.

“The challenge is everyone wants to know everything right now,” Gallivan said, “We have to make sure we have all the facts.”

Williams said students might want to know such information right away and recommends they reach out to senators to see what an adequate and comfortable time frame would be.

Gallivan said that these kinds of threats to school are “not uncommon” and that Cerritos College probably puts out more notifications than other colleges do.

“You see it on the news all the time but when they threaten your school, you’re grasping in fear.”

Gallivan emphasized that the student body should have faith that its police department and the administration are not hiding anything.