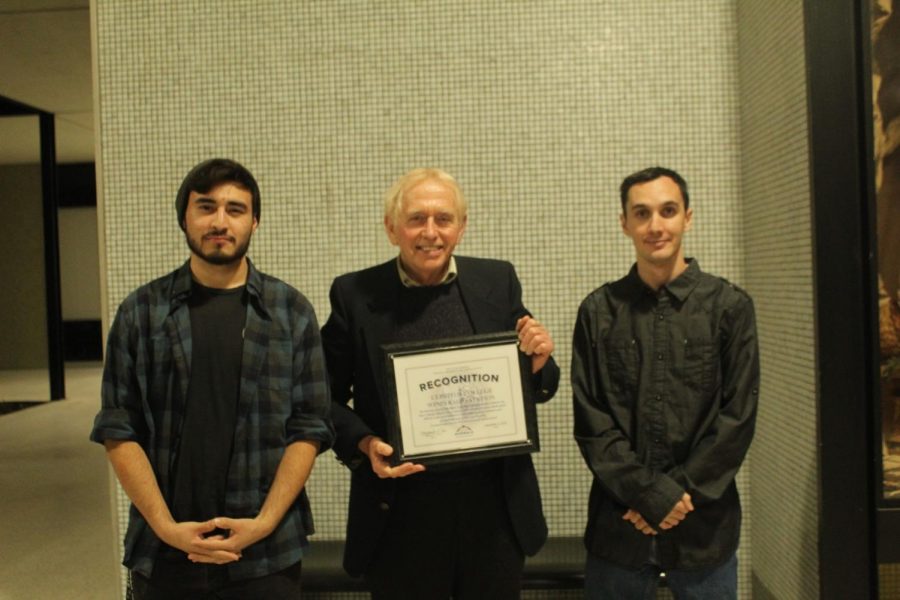 Casey Piotrowski, Juan Negrete and Donald Steele present the plaque they were given by city hall on Dec. 3, 2019. Photo credit: Oscar Torres

Casey Piotrowski, a faculty member of the college and radio station, along with Juan Joshua Negrete, show editor and entrepreneur, and Donald Steele, a student engineer of the radio station, were present to receive a commemorative plaque from the council.

The radio station started in 1973 and Casey has since been with the station for over 18 years, becoming the primary advisor of the program seven years ago.

“Besides the seven nominations in seven years, as well as two awards for the station, we’ve also won some national awards for a number of students,” Casey stated. “We don’t really do a whole lot of training or anything like that. Basically we’re in the studio and say ‘talk as much as you want, you can play anything you want as long as its clean as well.”

Casey also mentioned that “there have been dozens of individual nomination awards for students.”

Joshua elaborated on this: “For example, there was the best foreign language program that we did, it was a great show, and the year before that we won for most creative show that was the ‘Energy Hour’.”

Piotrowski also explained the differences on what WPMD does compared to the other radio stations, both on the college level and professional level.

“We don’t format our people to death. We don’t tell them what to do, when to talk and when not to talk and how much they can talk,” he stated. “As I said in the meeting, we have couple of rules. We can’t play anything that’s dirty, no obscenity in what you say and what you play and talk as much as you want but have a point and enjoy yourself.”

When speaking about how many hours that people listen to the colleges radio, Casey estimated: around 600 hours from the United States; 470 hours in Germany; 400 hours in the UK; 30 hours in China;15 hours in Jordan; 5 hours in Romania; and 2 hours in the United Arab Emirates in the last month. These numbers contributed to their nomination and recognition.

They also put all their time and effort into getting their content right on the spot. One example was having a person study and analyze old cinema, spending many hours analyzing the movie ‘Psycho’ and spending only 30 minutes on the recorded content. So every one in the group has managed to put all their time to make some of their shows well done so that many people can tune in and enjoy it.

WPMD hopes to continue to grow in popularity and success.