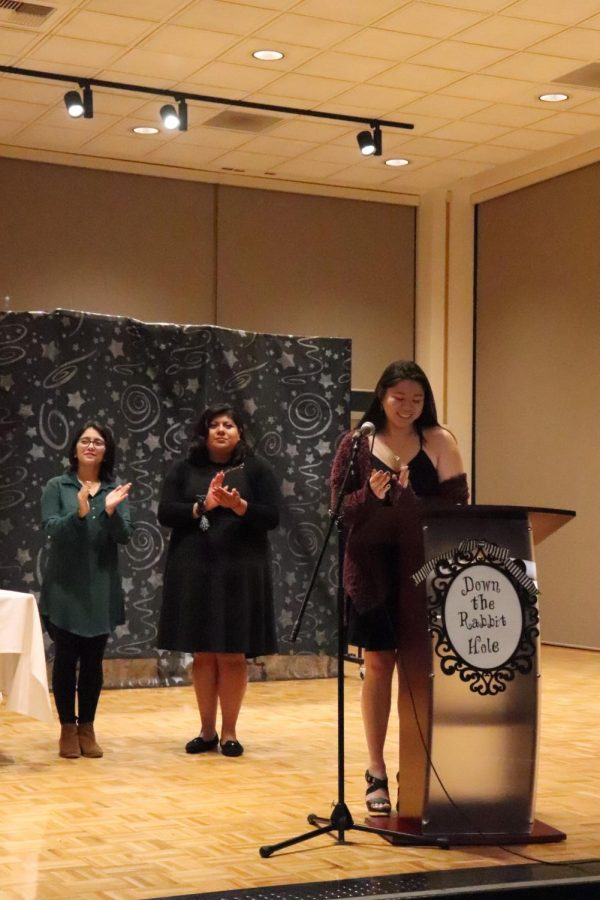 The Associated Students of Cerritos College hosted their annual Fall Awards banquet, where they presented awards such as the ASCC Service award and Leadership award to recognized students and faculty. The "Van Gogh in Wonderland" event was held on Dec. 6, 2019.

The Associated Students of Cerritos College hosted their annual Fall Awards Banquet in the Bhupesh Parikh Student Hall on Dec. 6, recognizing a number of students for outstanding community service while participating in programs and activities on campus.

This year’s theme was Van Gogh in Wonderland.

Before the start of the ceremony, guests and nominees helped themselves to the wide selection of fruits and sweets after checking in. Students, professors and even administrative faculty were in attendance.

The first awards were announced at 6:15 p.m. for the Bob Epple and Inter-club Council scholarships. Recipients of these scholarships need to be active participants in student government while taking at least five units with a minimum 3.0 GPA.

The scholarship was $100 with a certificate.

Several faculty members were also commended for their service on campus, including Stephanie Minami, who acts as an advisor to EOPS and as the current College Foundation Secretary.

Minami was one of the winners of the Outstanding Advisor award.

She stated she felt humbled, and explained she “came because I was so honored to be nominated by my students. Their opinions are what really matters.”

Other awards distributed Friday night included the ASCC Service and Leadership award and the Certificate of Service.

The last category of awards is a Falcon medallion separated by type of medal (bronze, silver and gold being the highest accolade).

In previous years, Rosas accumulated both the Bronze and Silver Falcon as well.

“I feel that if I’m able to help, why wouldn’t I?” she expressed.

Rosas credits her mentality for her desire to make a positive impact at Cerritos College, saying she wants “to leave this school a better place than it was when I first came here.”

Rosas’ generosity is something her fellow award winners have in common. Many nominees participated in several on-campus activities, all hoping to create a better environment for all current students.

After the banquet, ASCC Student Body Vice President Nathan Williams was posing for photos with cabinet members and other organizers. He also received a Golden Falcon medallion and was cheerfully sporting it around his neck.

After having been involved in a number of activities, Williams said he found the student government a great fit for him. “I genuinely think it’s fun helping people,” says Wiliams, “and I think it’s great to see people pursue their interests on campus.”