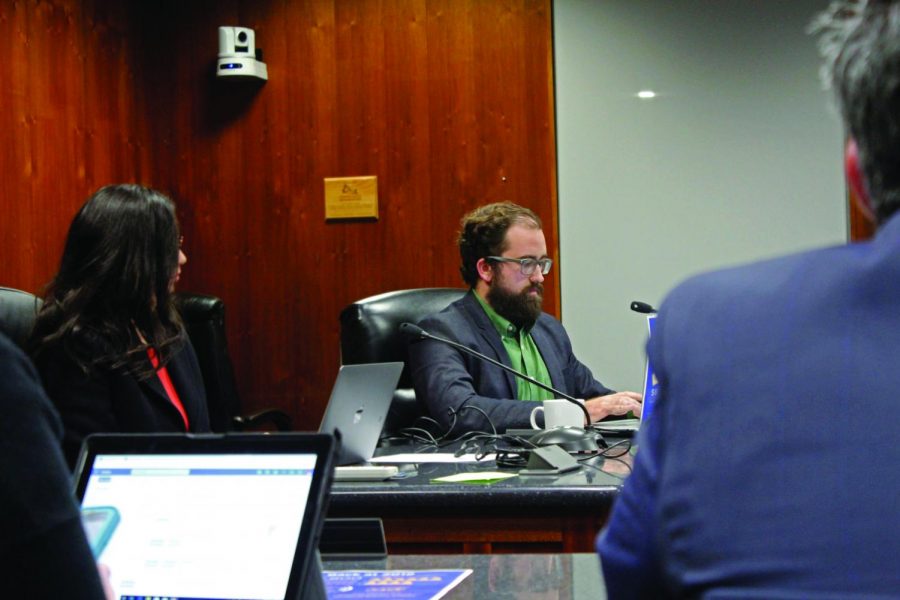 The motion to enter a Third Amendment with Follet Higher Education Group was carried on Jan. 15, 2020. This is in efforts to lower textbook costs for students on campus. Photo credit: Kianna Znika

A motion to continue lowering the costs of textbooks for low-income students on campus was approved by the Board of Trustees on Jan. 15 and will be effective starting Feb. 1 of this year.

The agreement to a Third Amendment with Follet Higher Education for continued management and operation of the Cerritos College Bookstore was motioned by Trustee Zurich Lewis and Trustee Martha Camacho-Rodriguez, who introduced the subject by discussing a tweet she had seen by a student explaining how poverty “trickled down” and affected her GPA.

“This young student was talking about how if she had extra money or even money to buy the books that she needed, that would have greatly changed her outlook on a lot of things that are based on your GPA,” Rodriguez explained. “For those of us who honor words on paper, we understand how important it is to have a book.”

Dr. Jose Fierro, president of Cerritos College, expressed the same concerns about the current high costs of textbooks and described that the campus already has a couple of areas where initiatives to develop low-cost textbooks are being implemented.

“Probably the leading area is the business department as most of the program’s textbooks are $15-$20,” Fierro stated. “And it’s not necessarily the cost of the textbooks, but it’s the access to the platform.”

He also explained that many faculty members have been doing a lot of work developing their own textbooks, including a professor on campus who developed his photography course textbook and made it free and accessible for his students.

“Our goal is to partner with the school districts and with the faculty on the campus to make to develop textbooks for all those courses that are free of charge, so that our dual-enrollment students will get more access to those textbooks,” Fierro added. “In some cases enrolling into a college class, the limitations factor in textbook.”

Efforts to put in which classes will have Open Educational Resources (OER) in future course catalogs are being considered, so that students may factor that in during enrollment.

Rick Miranda, vice president of Cerritos College, explained that the campus library “keeps essentially a catalog of OER, which may not always include a full book but may include supplementary information that faculty can use in the classroom.”

Some prior changes to the Second Amendment with Follett Higher Education Group included a two-percent reduction of costs for about 85% of all textbooks purchased by students.

With all changes being made, Marisa Perez, president of the Board of Trustees, wondered what the future of textbooks would look like on campus.

“Is the amount of money that the college is making from the bookstore decreasing?” she asked.

“It’s just getting harder and harder to be able to focus all of our resources to our current bookstore. So much is out there on the internet,” he stated. “If [students] can find it cheaper, they’re going to do so.”

The time period of the Third Amendment with Follet Higher Education Group will be from Feb. 1, 2020 through January 31, 2025.