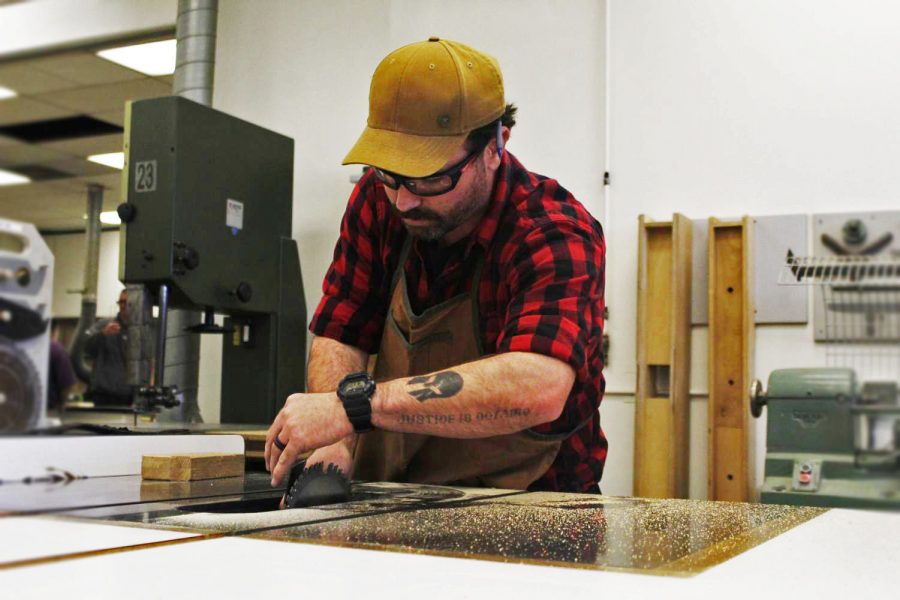 Travis Smith, a woodworking major at Cerritos College, cuts planks for a dresser.

Travis Smith is going to Cerritos College pursuing his life-long passion as a woodworking major. Surrounded by heavy machinery in the woodshop, he is the only student not wearing protective gear on his ears.

This is because Travis has been deaf since birth.

Many would characterize deafness as just a disability since the majority of Americans have experienced an upbringing in a hearing family.

The Deaf community can assure you, they manage, because to them they are not necessarily inhibited, just a part of a “linguistic minority.”

“Most deaf people are able-bodied, so I feel we have much less limitations than other disabled people,” Travis said.

What is unique to this tight-knit community is the rich history and culture, as well as traditions and values that are shared through generations of deaf families.

Ed Kelly and Cindy Hall are both full-time instructors at Cerritos College. Both are deaf and are prominently involved in the local and regional deaf communities.

Hall has been active in her respective communities, serving part in the National Association for the Deaf, along with deaf clubs in Florida and South Dakota.

In addition to teaching ASL on campus, Kelly has held positions in numerous deaf organizations and agencies such as OC Deaf, where he served as an advocate for deaf persons in his area.

“Sometimes businesses won’t provide interpreters so I would have to call and advocate on behalf of the deaf people,” Kelly said. “There is a list of different services we provided.”

Ed Kelly hails from Wisconsin, where he was born into one of the state’s largest deaf communities.

Most of his relatives, from parents to siblings to nephews, were born deaf. He says that his will to serve his community stems from early in his upbringing.

“My grandmother made my dad promise her that he will always be involved in the deaf community,” Kelly said. “Because if no one is actively looking after the needs of deaf people, then our communities would fade away.”

In recent years, Kelly was involved with the National Association for the Deaf and is the former president of Long Beach Club for the Deaf.

Cindy Hall also had community service instilled at a young age, being raised in Florida.

She explained that some agencies have slowly caught up with servicing the deaf in some states.

Kelly and Hall describe how often deaf people have to interact with hearing people often in their daily lives, whether at the grocery store, at work or just public spaces in general.

A linguistic barrier can make these into stressful environments, especially when human interaction is a must.

“Our (deaf) clubs provide a space for deaf people to feel relieved and talk to others in a comfortable environment,” Hall said.

Travis, who has worked at UPS for 16 and a half years, says language barriers are something he runs into at work quite often.

“When I have to talk to someone I always have to pull out my phone and type what I need to say, it’s the easiest way to communicate,” he said.

It is no surprise that minority groups are generally attracted to others that can closely relate to them, or communities that are familiar with each other.

Deaf culture is no different.

Ed Kelly says that another factor promoting community involvement is the strength that larger groups tend to have.

Deaf communities can foster deaf schools and institutions and they can work together on fulfilling their needs.

“Here in California, (deaf clubs) just want to interact and play games,” Kelly said with a smile. “But in Wisconsin, it’s on a more political level.”

Through our interviews, we found there is a stark difference in both experiences and perspectives within the deaf community, and it all depends on whether one was born with hearing parents or deaf parents.

The instructors referenced something called the “90% formula.”

This formula is derived from a study conducted by researchers at Gaudullet University.

They found that roughly 90% of deaf children are born to hearing parents.

Travis Smith falls into that 90%, and we were curious to find what type of values were instilled to him from his hearing family.

Smith said that his immediate family learned ASL and was always able to communicate well with him. At family events, his mother would translate.

Smith tells us that his wife is also deaf and he is expecting his first child soon.

“I am going to make all the furniture for my baby, all my own designs,” Travis said, excitedly.

“More people are learning sign language and that is really nice. Deaf people are thrilled when they’re able to communicate with others out in the world,” Hall said.

“And it was not like that many years ago.”