Seoul Connection: COVID-19 cases on the rise in South Korea

Seoul Connection is a column that follows staff writer Mirella Vargas, as she covers all things Korean. Mirella is currently living in Seoul, South Korea and provides a first-hand perspective into her stories. 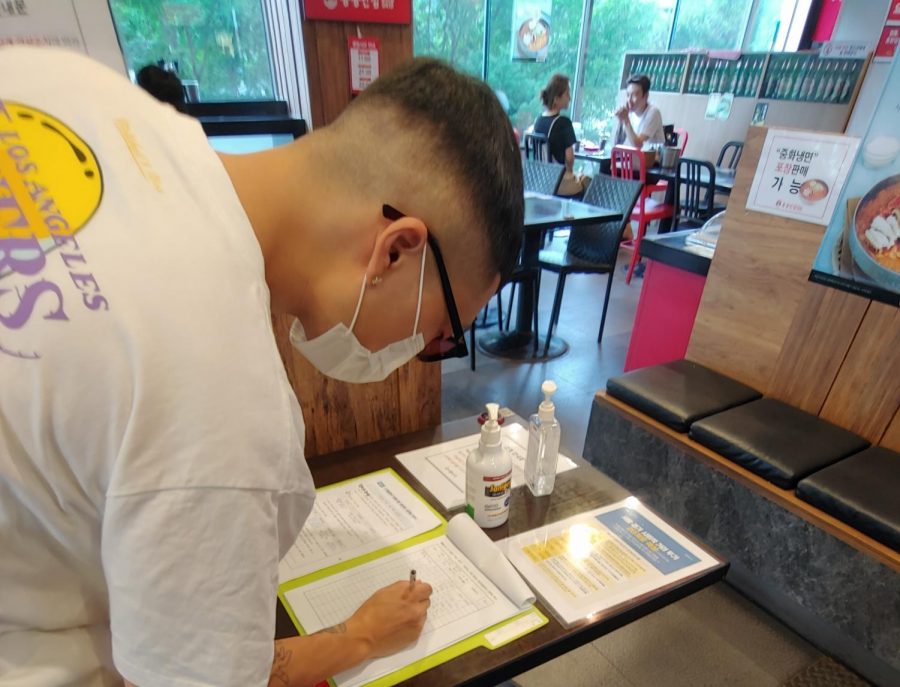 Dining guest fills out mandatory customer log with their contact information before entering a local restaurant. Restaurants and bars are required to keep a log of all their visitors for contact tracing purposes. Photo credit: Mirella Vargas

COVID-19 cases in South Korea have spiked over the last several days due to large anti-government protests attended by thousands of church members and far-right political groups, leading to chain transmissions.

There have been 3,175 new cases as of this Tuesday – with many cases being traced back to conservative protestors, who were out protesting against the current administration and the ruling Democratic party on Aug. 15.

One of the churches which participated in the rallies, Sarang Jeil Church, was the hardest hit, with 841 COVID-19 infections tied back to the church congregation.

With daily new cases sitting in the single and double digits for months, the recent spike has apparently been linked to this event, which is labelled as the main cause for the recent outbreak.

The Korean government uses extreme contact tracing methods which allows them to know where infections are happening and how they are being transmitted in order to contain further transmission.

The government often resorts to people’s smartphone records and CCTV video footage to identify and locate individuals who may have been exposed to COVID-19 and alert them to get tested via text message.

Some church members and organizations present at the event have been uncooperative with the government’s requests for personal information, making containment efforts more difficult.

Another method the Korean government uses to attempt to contain the spread of the virus is a three tiered social distancing policy system, with Level Three being the highest and most drastic form of social distancing.

The capital of Seoul, with the largest number of infections, has more drastic measures in place, banning all gatherings of more than 10 people and mandating masks be worn at indoor areas and crowded outdoor venues, including public transportation and taxis.

Many high-risk places, including karaoke rooms, clubs, PC cafes and buffets, have been ordered to shut down.

All in-person church activities have been prohibited as well.

President Moon Jae-in urged the public on Monday, to follow in the government’s anti-COVID efforts, saying there will be no choice but to raise the social distancing restrictions to the highest stage if the current Level Two campaign is unsuccessful.

He also said that the government won’t tolerate any “malicious and systemic” act of obstruction or spreading of fake news, indirectly referring to some of the local churches who ignored the government’s warnings and participated in the protests earlier in the month.

Extreme cult-like churches and far-right groups were also under the public scrutiny in late February, after Covid-19 cases in the country quickly grew to the thousands, making South Korea the second largest hot-spot at that time.

This outbreak was connected to the Shincheonji Church of Jesus, which is considered a cult by most mainstream churches in the country.

South Korea reported 264 new cases this Tuesday, raising the total to 17,945, according to the Korea Centers for Disease Control and Prevention.