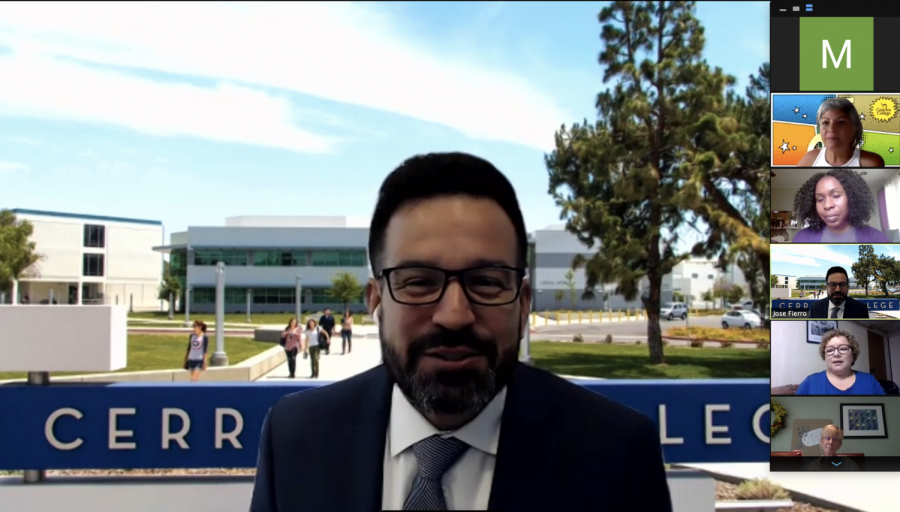 Cerritos College President, Jose Fierro, speaking during the 65th Anniversary Kickoff event. All anniversary activities this year will be held online due to Covid-19.

In true 2020 fashion, the kickoff event was held online via Zoom video conference, and was attended by over 80 participants including former and current faculty members, staff and alumni.

Mayor Perez expressed her appreciation for the college and the professors who positively impacted her during her time as a student and shared one of her favorite moments as a student.

Jackson encouraged everyone to get involved in the foundation and support the “Give Where you Live” campaign – which aims to provide financial help to students from donors within their local communities.

“Make a gift in honor of the 65th anniversary to help a student in your hometown. Today’s Cerritos College students are tomorrow’s workforce — they are the future nurses, auto mechanics and business owners,” Jackson said.

Fierro also echoed a similar message throughout the event and spoke about the importance in investing and supporting students, as they will shape the future of their communities after they graduate.

Cerritos College was established in 1955, after Dr. Ralph F. Burnight, who was a school district superintendent at that time, proposed the construction of a junior college where students from the Cerritos-Norwalk areas could attend.

In the early years, the college had just a few hundred students enrolled, but enrollment grew to 10,000 in the first decade and now serves over 20,000 students, offering degrees and certificates in over 180 areas.

Throughout the decades, the college campus also grew with the addition of new programs and the construction of buildings such as the Science and Technology Building, Auto Partners Building and the Falcon Gymnasium completed in the last decade.

Perhaps one of the most notable aspects of Cerritos College is the diversity of its students who come from different backgrounds for an opportunity to achieve their goals – ranging from new high school graduates to working adults looking to expand their skillset.

Other celebratory events will be held online this month, including a Birthday Cake/Dessert Design Challenge and a Virtual After Party livestream event, hosted by radio-host and DJ Mando Fresko on Sept. 17.

The college also invites the campus community to share any memories or photos of the campus, as part of the 65th anniversary celebration events.