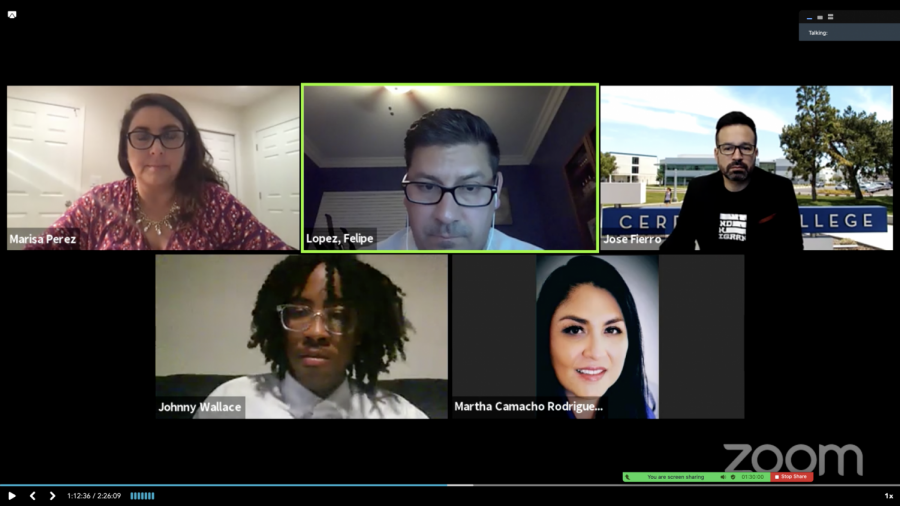 Vice President of Cerritos College, Felipe Lopez discusses the proposed budget during the meeting. The board of trustees met for their only meeting of the month on October 7,2020.

As a result of the COVID-19 pandemic, the college initially faced an over $8 million deficit, but has since reduced it to under $3 million.

In order to face the loss of income provided by the state of California, the college has begun exploring its options to replace that much needed cash flow.

The meeting did not specify which course of action would be taken, however it was heavily implied that a loan of $25 million would need to be taken out to cover all expenses for the year.

The primary goal of this meeting was to present the new operating budget for the college’s 2020-21 school year.

The College is required to have its 2020-21 annual budget adopted by the Board of Trustees and submitted to the Chancellor’s Office by October 31, 2020, and to the Los Angeles County Office of Education after adoption.

This budget provides a snapshot-in-time view of the District’s projected revenues and expenditures. These financial projections are based upon the best and most current information available from both internal and external sources including the Chancellor’s Office. Budget revisions are regularly presented to the Board of Trustees throughout the year as new information becomes available.

This years presentation came after the college has had to face a wealth of new problems.

This raised concerns about the coming years and the college’s stability, but more information is yet to come.

The Cerritos College Board of Trustees meeting began with Veronica Miranda asking the board to not cut spring courses it would negatively impact part-time faculty.

This emotional appeal however, was severely diminished by a clear lack of coordination, as the livestream for the meeting was not operational for several minutes past the scheduled start time. The meeting itself was plagued with lagging video as well as audio that would simply cease to work at times.

For viewers who made time to watch the meeting live, it was difficult to follow along, and for those who jumped in at a later time, it was all but guaranteed that none of it would make sense.

Later in the meeting, it was stated that construction projects on campus had run into unforeseen complications and as such even more money would need to be allocated from the bonds to reach completion.

The money was allocated from the GO Bond for the Performing Arts Center raising the cost of the building to $10.2 million from the original $9.8 million  original contract amount. Due to a couple of changes made to the structure at the request of the architect and some lighting issues brought up by the construction manager.

Some time in the meeting was also allocated for the recognition of James Krulic, who has served Cerritos College for many years.

“He has served Cerritos College for 45 years, 1975 to 2020. He has done it very proudly, and he has really had the best interest of our students and community every day he comes to work,” Fierro said.

Kind words were shared by faculty during the brief but wholesome celebration.

“Jim (James ) taught in the English department, a whole range of courses from developmental English to creative to critical thinking,” Frank Mixon said.

“At one point in this long career, I was fortunate enough to share an office with Jim, back when the multipurpose building house the liberal arts division,” he continued.

” I saw firsthand Jim’s commitment to our students. He met with students frequently. He was always encouraging during their struggles. Always forgiving of their missteps. I learned a great deal about patience from Jim and I am grateful for it.”

“On behalf of the Liberal Arts Division. I want to thank you for all your hard work. On behalf of our students and to wish you the very best in your retirement, you have certainly earned it,” Mixon said. “You’re a kind person, and you will be missed very much. Thank you.”

Krulic received the award with kind words towards the people in attendance.

“when I started teaching my first class at Cerritos college in the summer of 1975, I never could have imagined how long and remarkable this journey would be four and a half decades later, I’m amazed to look back and realize just how much this fine Community College has grown. For me, it’s been both a pleasure and a privilege to work with exceptional educators and the support staff in the liberal arts division,” Krulic said.

A second recognition during the board meeting was given out for employee of the month of September, which was given to Monique Rodriguez, a counseling assistant at the college.

Fierro stated ” Monique is highly respected by her colleagues, when asked to describe her her colleague describe Monique as a strong advocate for all. She has an admirable work ethic and executes her task with poise. These are just a few of the many strengths and assets that she brings to the counseling department and Cerritos College.”

“Monique your dedication, commitment and willingness to go above and beyond to meet the needs of the students and staff are exceptional,” Fierro continued.

Rodriguez shared a few words herself stating “I would like to thank my counseling family. I have grown so much and learn so much from these caring individuals, and they’re just so hardworking, and I’m honored to be a member of the team. Thank you.”

The rest of the meeting consisted of smaller minutes, which can be found on the board archives.

After closed session Perez read the following statement, “It is reported that in Closed Session the Board of Trustees approved an amendment to the contract for employment of Mr. Edmund R. Miranda, Jr. as Vice President of Academic Affairs/Assistant Superintendent to extend the term of employment from May 18, 2021 to May 18, 2023.”

The next scheduled Board of Trustees meeting is on Nov. 18.