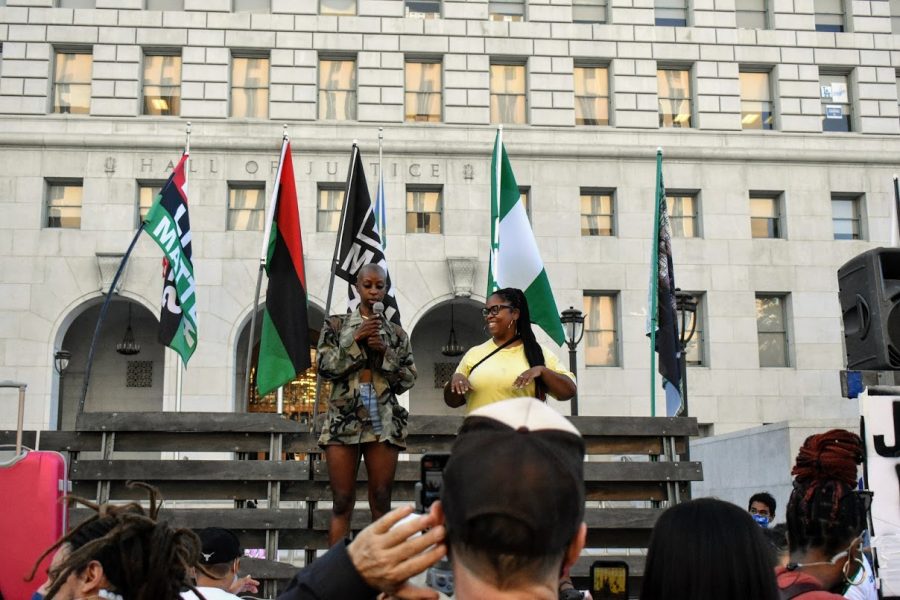 Organizers of BLM honor victims of police violence. They spoke at the LA Hall of Justice as LA County Attorney General Jackie Lacey is projected to loose reelection on Nov. 4, 2020.

Lacey has prosecuted few officers in police brutality cases, making her an enemy of the Black Lives Matter movement. In response to her inaction, BLM has been protesting and campaigning for her removal.

While the votes had not been fully counted at the time of celebration, George Gascon was favored to win the LA County DA position.

“We feel like it’s a victory,” said Melina Abdullah, chair of the Department of Pan-African Studies at California State University, Los Angeles and co-founder of the Los Angeles chapter of Black Lives Matter. “This is an affirmation that all our work is important and that hard work leads to victory.”

The celebration began at 3pm by blasting songs like NWA’s “F**k the Police” and YG’s “F**k Donald Trump” on the steps of the Hall of Justice where the DA’s office is housed.

LAPD blocked off roads and kept their distance from the event but their very presence sparked anger from the event’s participants.

Black Lives Matter described the event as a celebration rather than a protest. They sold t-shirts and merchandise along with food and drinks.

Almost everyone in attendance wore a face-mask for the duration of the event.

Children were also in attendance, and they played as BLM speakers critiqued the LAPD. A young girl named Messiah even ran up to a BLM supporter and asked if she would like to play.

Family members of police violence victims then spoke about their loved ones. They thanked Black Lives Matter for giving them a voice to speak against police violence.

Many of their speeches included vulgar language, and several spoke directly to the police who monitored the event from down the street.

Quinces, the father of Grechario Mack, who was killed by LAPD, spoke at the event.

“The sixth leading cause of death for black men in America is death by cop,” Quinces said. “They have police officers in the street killing us, and they have Jackie Lacey in the DA’s office killing us. She put 22 people on death row, most of whom are people of color. Black Lives Matter is doing this for the youth, so their family members won’t be victims. We have to stop it now!”

“I hope Gascon feels some pressure,” said Dani, a Los Angeles resident and participant in the BLM celebration. “I hope he feels pressure to make changes in the justice system and explore or reopen cases where people were killed by police for no reason.”

“We need to defund the police,” Dani continued. “We don’t need them long term. We can take back power by taking back the money.”

“She betrayed all of us,” said Lucia, a LA resident and participant in the celebration. “All people are victims of police violence. We are going to hold Gascon accountable for his actions and vote him out if he does not follow through on his promise to reform the justice system.”

“We need to defund the police. Anything else would be unacceptable.”

“Voting matters,” Abdullah continued, yelling over YG’s rap “F**k Donald Trump.” “But it wasn’t just voting; it took three years educating people of how terrible she is. We poured our hearts into this and the spirits of the 626 people killed by police.”

“We are gonna keep organizing, but the next person we would like to see out is Alex Villanueva.”

Villanueva is the current sheriff of Los Angeles County.

Lacey conceded her seat to Gascon on Nov. 6, after polls showed her defeat was imminent.