Cerritos College Board of Trustees announced 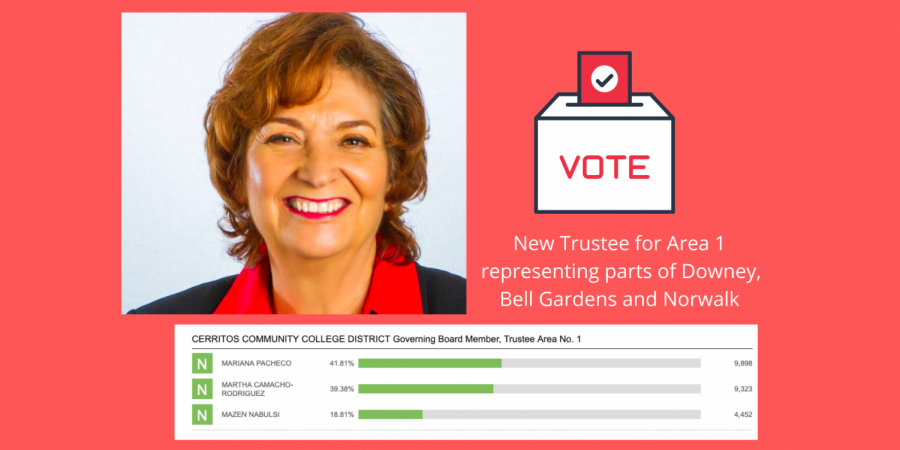 Incumbent Martha Camacho-Rodriguez was defeated by challenger Mariana Pacheco, a teacher and director of nursing at Downey Adult School, for Trustee area one.

This was the only race within the Cerritos College board of trustees, other elections such as Marisa Perez Trustee area four, did not have contenders.

Pacheco, mother of Downey Mayor Blanca Pacheco, was well known throughout Downey as member to different clubs and work in adult education.

She will now represent the Downey, Bell Gardens and Norwalk area for Cerritos.

Pacheco’s role is not officiated until she is sworn in on an upcoming date.

Wednesday Nov. 18 will be the first meeting since the election where they will discuss the CCCAA Board of Directors decision to pursue a return to athletics in the Spring, despite many institutions within the district staying closed or mostly closed to students.

The Cerritos College Board of Trustees are elected every two years, and each member serves for four years, meaning about half of the board will be facing their own reelection campaigns come 2022.

Birkey, Lewis and Liu, who were elected or reelected in 2016, will have to decide if they want to run again, unless they too go unchallenged.

When asked by Talon Marks what she’ll prioritize as Trustee, Pacheco said “My main priority would be both you and the staff. Because to me the staff is who really teaches you and gives you the tools to be able to do what you do and what you need to have a career,” she said.

“If we don’t support them then how are they able to support you?”

Pacheco will have a lot of work ahead of her but from the beginning of her campaign she has insisted that she is “…in it to improve education so that education is accessible to all. I’m in it to help in whatever way I can because that’s what I’ve done all my life.

The Board of Trustees will recognize Camacho-Rodriguez’s work while serving trustee area one on Wednesday’s meeting.
Camacho-Rodriguez unseated Bob Arthur in the 2016 election. While at Cerritos, Camacho Rodriguez became board vice president under Marisa Perez.

She was also elected as the division one director of the Central Basin Municipal Water District.

She declined a request for interview from Talon Marks.

For being the only race in the Cerritos College board, it was a tight one, with Pacheco earning 9,898 votes, just 500 more than Camacho-Rodriguez, and Mazen Nabulsi trailing third.

“I’ve looked at projects that better my community, I’ve worked with students in Downey High, seen what they’re capable of and I always encourage them that they need to continue their education,” Pacheco said.