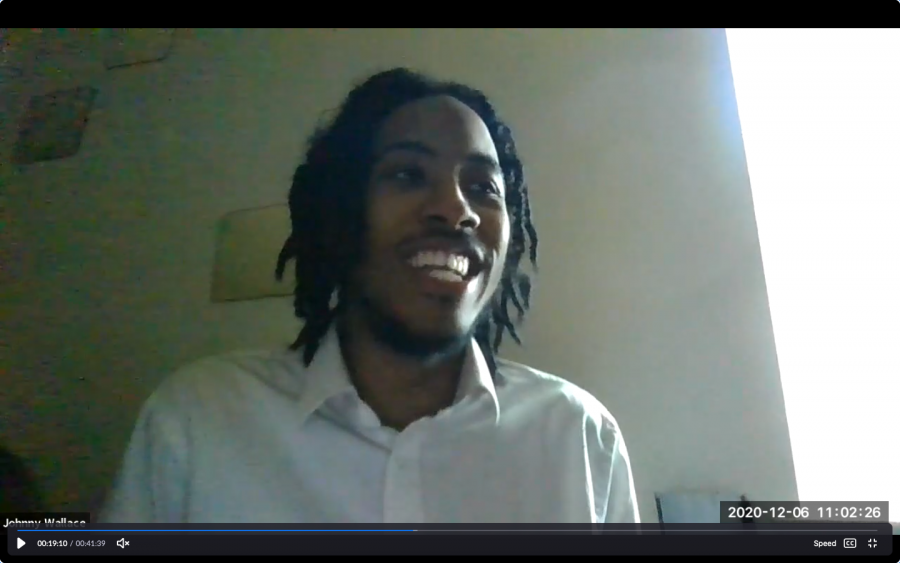 Trustee Johnny Wallace chats from his home office on Dec. 6, 2020. He said skateboarding and his faith has carried him through this semester.

Since the campus closed in March, Cerritos College students have attended lectures, meetings and even their own graduations from their makeshift home offices, some on their kitchen tables, others in . The new obstacles and challenges added on to students’ workloads was the cherry-on-top for what is perhaps the worst year in decades. 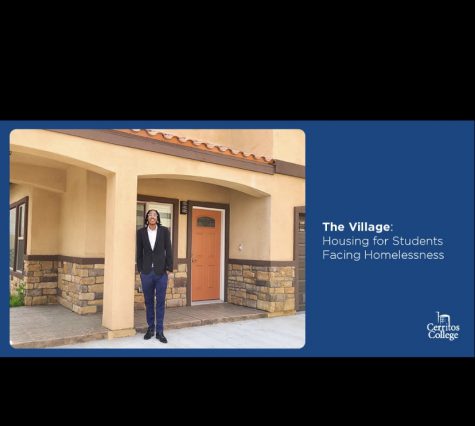 Talon Marks reached out to student trustee Johnny Wallace, one of the college’s most distinguished persons, to see how this semester has treated him and what advice he may have for students to handle this unprecedented time.

“If this year has taught us anything, it’s that everything we thought was certain is quite uncertain, in fact,” said Wallace, who is currently studying political science.

Despite the blues many students are feeling off-campus, Wallace remains optimistic about the situation, believing that there is a take away from the challenges of online and remote learning.

“Every problem that I see is an opportunity in disguise,” he said, “I’ve kind of seen it as that right now. I’m working with, you know, a few nonprofits and I’m also working in the financial aid department and all of that from my home.”

His advice for students stressing over finals week is to finish strong and resist slowing down at all costs.

“You gotta keep that foot on the gas, keep applying the pressure. 2020 is coming to an end, and it has been a tumultuous year, but I see a lot of people starting to relax a bit and say, you know, that the holidays are here,” Wallace said.

The Student Trustee serves for one academic year, meaning Wallace will remain in his position through the Spring 2021 semester. Needless to say, he is also involved in several extra curricular activities on campus.

“I have to show love to Umoja (success program). They have always been a great supporter of mine and really opened my mind up to so many principles of African thinking,” Wallace said.

He was also the president of the Cerritos College Toastmasters and was involved in the Geography club, ASCC and the United Nations club.

“There are so many support systems on campus.”

“All throughout high school, my dad and I would talk politics, so when I actually saw the opportunity to learn more in depth about the political process and democratic process, I chose to go that route.”

Wallace did reveal that the student trustee position was not what he always had in mind, but was encouraged to go for by a fellow colleague in ASCC.

“A fellow cabinet member suggested it to me and I was like, ‘Well I never thought about it but I’m always open to trying,'” he said.

Wallace volunteered under civic leaders such as the mayor of Artesia, Ali Sajjad, and the deputy mayor of his home town of Long Beach, where he tried to make connections with elected officials and others with influence in local government.

“I was already trying my best to rub elbows with people who were maybe where I wanted to be politically.”

Wallace had originally intended to go to a Cal State or HBCU out of high school, but instead looked at Cerritos as a ‘point of reflection’ to find what he really wanted to do for higher education. He said he was drawn to Cerritos College because of his older sister, Darcy, who also attended Cerritos before him and liked her experience.

“I applied to UC’s and cal states and received acceptance letters from quite a few universities I applied to but I decided that community college route was the best way and I came straight from high school for a degree in political science,” said Wallace on why he first chose to attend Cerritos.

After he graduates in the Spring, Wallace was hoping to transfer to Howard University, a private college in Washington D.C.

“So after completing my time studying in building a foundation within Howard University, I would like to obtain my master’s in public policy at USC,” he said.

In 2020, we witnessed one of the largest movements of modern American culture after the police killing of George Floyd and Brionna Taylor, which stoked preexisting anger nationwide, with calls to prosecute killer cops and defund the police.

Wallace, who himself is a mentor and tutor to underserved youth, weighed in on this topic, arguing that change is generated from the grassroots. He says it’s why he is diligent in his community service.

“Voting in a new President won’t effect, the change that we want. We want to happen in our daily lives on it that’s up to us, that’s up to every city every citizen in every county throughout the United States to make that change on their level in their community and not waiting for the federal government to do so.”

With an impacted schedule such as Wallace’s, it helps to find some type of escape from the day-to-day workload. For him, its been skateboarding and keeping up with his faith.

“Yeah, I love skateboarding. And I love God, I love studying the Word of God and finding out how to develop that relationship more. Those are been the two main things that have helped me out.”

Wallace will participate in the final Board of Trustees meeting on Wednesday Dec. 16, at 7 p.m. As always, the link to the meeting is available on the school’s website.