Day one of the Falcon Games: an intense tournament 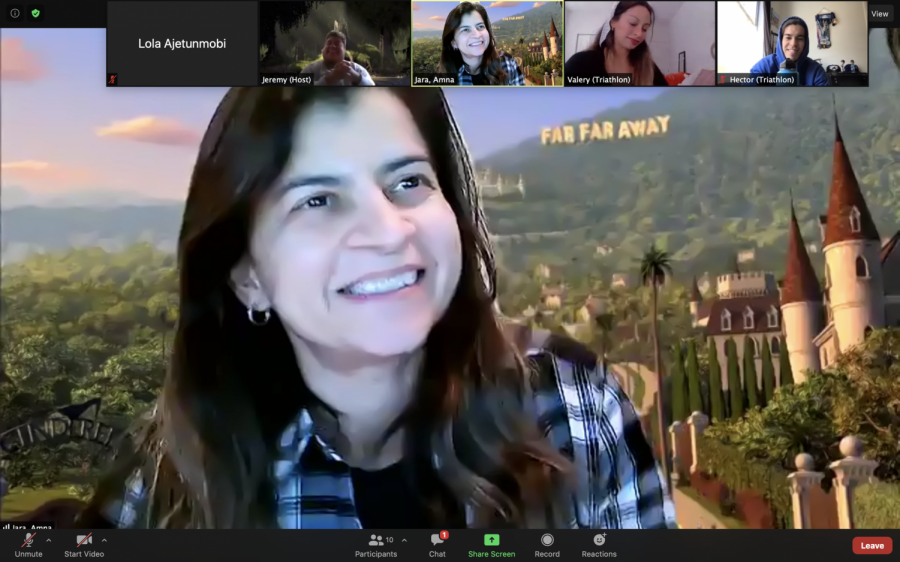 Amna Jara, the students activities coordinator, conversing with the students after finishing the game. AJ laughs with the Jeremy, president of the Geography Club, about their Shrek movie backgrounds. Mar. 9, 2021.

Cerritos College hosted their 10th annual Falcon games this year during the week of March 9. Due to the pandemic, the event was held on Zoom.

The Falcon game event is separated into three days, each consisting of different activities. The first day is the academic decathlon, the second day is the physical games and the third day is the video game tournament.

The Geography Club was in charge of hosting this year’s Falcon game event. Automatically, they receive a prize of 200 dollars for their club for hosting.

For the activity, the clubs played a round of Kahoot where they answered questions related to math, science, pop culture and questions specifically about the Shrek movies.

Each club was allowed to go into separate breakout rooms to discuss what the answer would be to the questions presented. Then they would press on their decided answers and rejoin the game room.

In the beginning of the game, ALPFA took the lead during the sixth question. After the 22nd question, Phi Theta Kappa took the lead surpassing Econ in third place and bumping ALPFA to second place.

For participating, each club automatically receives some money. However, depending final scores, they win more money for their club.

Before the pandemic, the Falcon games were held on campus and included activities such as hula hoops, the three-legged race, potato sack race and video games.

The club that won received a plaque with their name on it. However, the students held a committee in 2012 because they wanted to host the games and from 2013 the event consistently continued from there.

“The event kind of became our tradition in the spring semester,” said Amna Jara, the Students Activities coordinator.

Jara said there have been different themes for the past years such as Star Wars and Harry Potter. This year’s theme is Shrek and the 2000s. The activities pertain to the themes of the year.

The requirements to participate in the games is being a Cerritos College student who is enrolled in a minimum of one unit and they also must be a member of a club.

“Say a student really wanted to participate in one of the games, we would just tell them to join a club through Falconsync and they will be on the roster,” said Jara.

Students are encouraged to attend these Falcon games, especially those who participate in clubs. It gives members the opportunities to get to know one another which was the initial problem in the first place, explained Jara.

The physical game was an escape room and the video game portion was playing the interactive guessing drawing game Skribbl. They were both held during the same week.