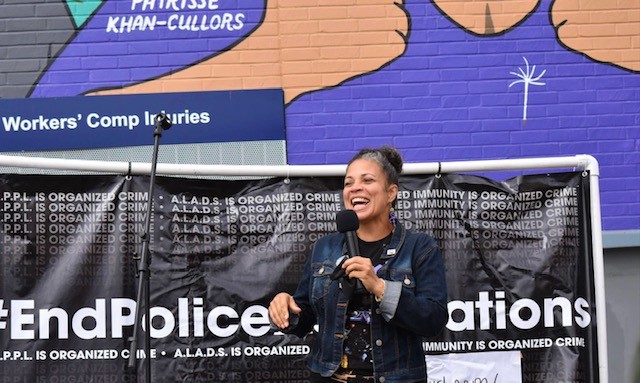 Dr. Melina Abdullah speaks at a BLM protest of the Police Protective League on April 21, 2021. Dr. Abdullah was invited to speak at Cerritos Colleges’ introduction to the new Black/ Africana Studies program. The theme of the social justice discussion was “The Intellectual Arm of the Revolution.” Cerritos’ new degree program is timely in light of the current climate in world.

Dr. Melina Abdullah expressed her excitement for Cerritos Colleges’ new Black/Africana studies degree program that will be available for students in fall of 2021 during a forum held on May 4.

First of its kind at Cerritos College, the Black/Africana Degree, program offers an introduction to the theories, principals and the practices of social justice with an emphasis on the study of life, history, culture and social justice traditions of black people.

This degree program will be open to anyone who seeks to do advocacy work to promote equality for all underrepresented groups in an effort to create a more equitable society.

Dr. Abdullah continued her impassioned discussion about what black studies are and what it means to a community. She said that black studies should be thought of as intentionally and deliberately creating individuals who are engaged in community work.

Further she said that black studies and ethnic studies is the only set of disciplines that actually come from community struggle and community demand.

“We are intentionally building students who are evolving as scholars and that are activist’s scholars. We are not meant to just engage in the classroom but we have developed our discipline as the intellectual arm of the revolution,” she said.

Abdullah gave a brief overview of the establishment of the social justice movement as it relates to black studies. She introduced the Sankofa principle that Dr. Jeremiah Wright wrote in his book called “A Sankofa Moment: The History of Trinity United Church of Christ.”

According to Wright the Sankofa principle means that we cannot go forward without first going back to the past to understand how we got to where we are. Sankofa is an African word that literally translates into “to go back and get it.”

“If we do not understand from whence we came, will forever be headed in the wrong direction,” she said.

Born in Oakland in the “70s, Abdullah said that the choices of schools at the time she was coming up were fraught with violence and other issues, including the crack epidemic.

“My parents would not settle for my attendance at Fremont high school in Oakland. We utilized an address and I was able to attend Berkeley High School,” she said.

Berkeley High School is where she was introduced to black studies because it was the only high school in the nation that had a black studies department.

Black studies gave me a counter balance to the conditions I was facing growing up in my Oakland community,” she said.

A graduate of Howard University where she majored in African American studies, Abdullah said that the successes she benefited from in the “90s was as a result of the struggles that began in the “60s and before.

She highlighted the formation of the Black Panther party in Oakland in 1966 by two Merritt Community College students, Huey P. Newton and Bobby Seale, to illustrate the correlation with the BLM movement.

“People think when we talk about the birth of movements that are organized for transforming the world that it takes masses of folks but you should know that those movements are often started by very few people,” she said