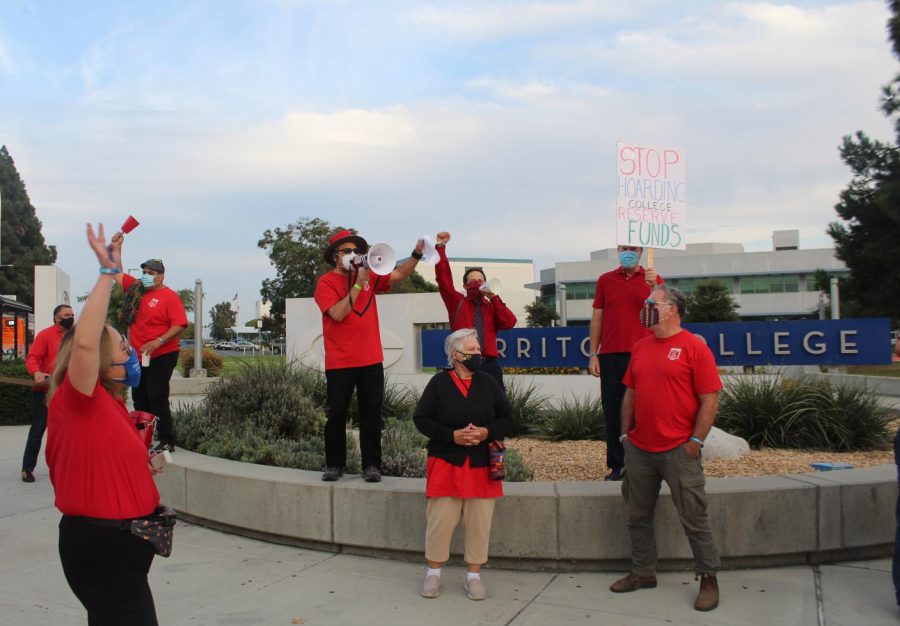 Cerritos college faculty and staff picket on the corner of Alondra and Studebaker during contract negotiations with the college on Oct. 6, 2021. The district wants to implement a CAP on healthcare plans that will increase premiums raising the costs for full-time employees.

On Sept. 17 approximately 44% of full-time faculty members were notified that their current healthcare coverage plan provided by the district was most likely going to be removed.

Educators were left with less than a month to make important decisions for themselves and their families regarding their healthcare coverage during a pandemic.

There is currently a CAP that is trying to be reinforced where anything that is over $23,500 will be paid out of pocket. Cerritos College had previously been covering the complete cost of healthcare premiums.

“There are individuals that have larger families or underlying health conditions. Those that need healthcare the most are the ones being penalized,” said Dr. Richard Garcia EOPS specialist.

Teachers organized a rally on the corner of Alondra and Studebaker. This location was selected so that they will increase their visibility to the public.

About 50 individuals were at the demonstration along with a cow bell, a mega phone and various signs. Faculty along with a few nursing students stood in front of the Cerritos College sign voicing their disagreement with the negotiation process.

“We started negotiating our contract in November of 2020, we wanted to ensure that our faculty retained the appropriate medical coverage and that the district covered medical premiums.” said Professor April Bracamontes, Vice President of the faculty union and lead negotiator.

The proposal made ensured that all premiums used to cover medical expenses will be covered by the college. The contract was meant to last until 2024.

On Sept. 9 a memorandum of understanding was sent to the district stating that they would cover the premium for at least another year so that faculty will not be impacted. The district ignored both of these negotiations.

The district announced a statement regarding the rally, “We regret the picketing action called for by the CCFF, an action that is contrary to the interests of our students. Labor contract issues should be resolved at the bargaining table and not interfere with our students’ academic objectives.”

In response to the article released by the district, History Professor Walter Fernandez responded, “I’m surprised people with such education have very little to say about this, it makes very little sense, it makes absolutely no sense.”

Fernandez’s response to the districts response about resolving issues at the bargaining table was, ” If the negotiation table was working we wouldn’t be here.”

Dr. Fierro said, “I consider the actions of CCFF to be disruptive to the educational period, but people have the ability to assemble and it is a right.”

When asked if he believed students should also assemble in following their educators’ examples in fighting to maintain their current healthcare plan he refused to comment.

“I thought the Cerritos Way meant we care for one another and treat each other like family. So I guess the question is would you do that to your family if you had the money?” said President of the CCFF, Dr. Lynn Wang.

A common concern from the demonstrators gathered outside the college was directed towards Dr. Fierro, “The college has money. Faculty does not see why healthcare is being held hostage, pandemic or no pandemic. It’s shameful,” Fernandez emphasized.

Of the people gathered it was of mutual understanding that the rally was necessary so that their voices would be heard. They felt like they were not being appreciated.

Educators felt the administration office acts as if they do not want to take care of their employees yet announces their immense gratitude for them at the Convocation led by Dr. Fierro on Sept. 30.

“The message the district is sending is that we are expendable and that we do not need to be taken care of and that we are not important. When in fact faculty and staff help students accomplish their goals by getting them to point A to point B.” Disappointed, Bracamontes continued, “The lack of care that is being shown is troublesome.”

“We want to feel secure.” said Maria Uglade, spanish instructor and interim foreign language chair, “The problem right now is that we are in a pandemic. The district wants us to do hybrid courses, face to face and online without being protected. The vaccine does not protect us from not contracting the virus.”

Educators stressed the importance of their healthcare plans and the damage that will be done upon their removal. Aside from coverage when contracting COVID there are many health conditions that the current healthcare plan covers.

Some faculty members can end up paying an additional $1,300 a month.

The school enforced a mandate requiring that about 50% of classes be held in person. Due to the mandate faculty is being forced onto campus during a pandemic while their healthcare is being threatened.

On April 2, 2021 Dr. Fierro announced that 50% of classes will be held in person. Resulting in educators being placed into precarious and stressful situations.

The current healthcare plan provides security. If educators are healthy, comfortable and have peace of mind they will be able to provide their students with better education.

“We will be more helpful to them, they will be our focus, not our healthcare plan. This keeps us awake at night.” said Ms. Uglade.

Walter emphasized, “With the amount of money this school has on reserves there is no reason why health care is being used as a threat. It is used every time we renew a contract. I’ve been out here four times in red shirts.”

To cover the premiums of all faculty members is $300,000. To cover these premiums over the next 3 years is about $1 million. The college can easily afford to cover the cost of healthcare premiums but decided to move these funds into the college’s reserves.

There is at least $38 million in the reserves sitting in the general fund. The reserve is ‘being saved for a rainy day’.

“Essentially any fund that is not spent is tucked away into different accounts. I do not know why they choose not to spend it. I would argue that this is a rainy day. Healthcare is important especially healthcare under COVID” said Wang.

Educators mentioned that there are presidents and vice presidents that do not depend on healthcare the same way many faculty members do.

Dr. Fierro said, “The board does not want to remove the current healthcare plan from any employee on campus and has never removed any healthcare coverage plan for any employee.” He continued, “The board has been generously providing additional coverage.”

Many of the current staff members chose to work at Cerritos College due to the many benefits the institution offers their employees. “A lot of us choose this job, part of it we love it but the other part is the benefits,” said a counselor who wishes to remain anonymous.

“This was our commitment and now they are taking it away. That’s a deal breaker”

Dr. Fierro later reaffirmed his claim again that the board has never considered removing the current health plan but the district is implementing the CAP.

Denying the board wanting to remove the current health care plan for full time employees and dismissed the reason demonstrators decided to hold a rally.

When asked for more information Dr. Fierro concluded, “Negotiations happen and they happen at the negotiation table. That is confidential information.”

California is among the top 5 states with the highest educator shortage. Some educators have commutes that are over an hour. As dedicated as they are to their profession they do not receive a lot of compensation and rely heavily on the benefits offered to them.

“We all want what is best for our students, they are asking faculty to come and to teach and provide opportunities to those who might not have the technology or access to do online courses. We’re here putting our lives at risk as well.” Concluded Dr. Garcia. 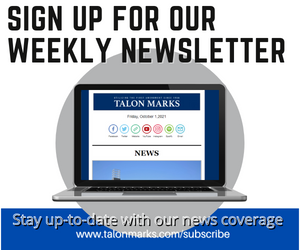