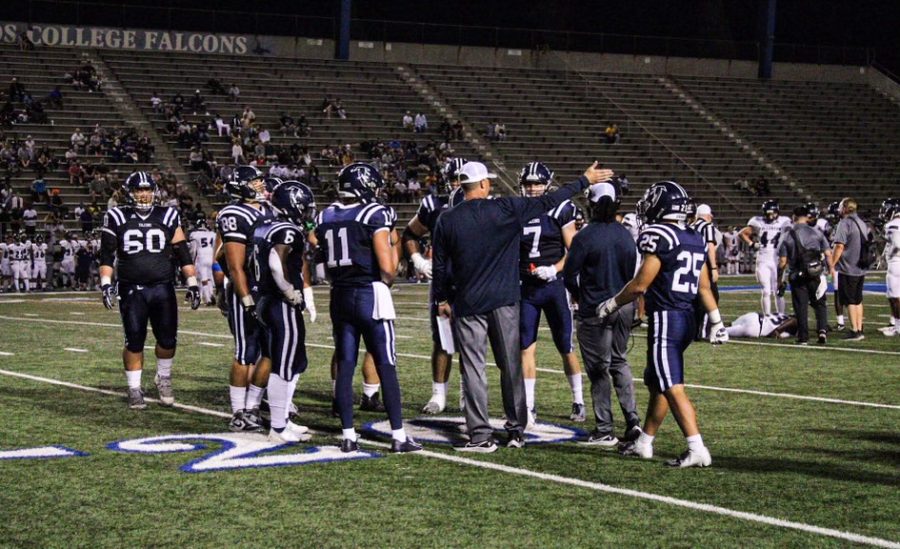 Before the football team was shut down on September 24. The coach is seen orientating his players on the field September 11.

Cerritos College football team suffered from a COVID-19 outbreak for the first time in 18 months since the campus has reopened.

The team was temporarily shut down on Sept. 24 due to delayed test results. The game scheduled on Sept. 25 against Southwestern was canceled the day before and is rescheduled for Nov. 20 at 6 p.m.

The entire team is now cleared to play.

Due to the increase in positive testing, especially in contact sports, there is a backlog in laboratories throughout the county and state. Resulting in delayed test results.

Once Cerritos College received results from the laboratory on Oct. 2 there were a confirmed number of 10 cases amongst students and one faculty member.

After the school was notified that there were a total of 11 positive test results, the football team was temporarily shut down.

Individuals that tested positive were immediately placed in isolation.

The Los Angeles Department of Public Health began their investigation as well and began contact tracing after being delayed notice of an outbreak.

“By the time we had notified the public health department that we had an outbreak, we had isolated everyone for several days,” said Dr. Fierro.

On Oct. 5 the isolation period was terminated and the Falcons will be playing ELAC on their campus on Oct. 7 at 6:30 p.m.

During their inspection, the Department of Public Health examined the gym, weight rooms and field house. After testing each facility, the department found each area was clean.

“We report all the cases as they come,” said Fierro, “Besides this particular outbreak we haven’t had any outbreaks or anything like that.”

Rumors of the outbreak being caused by negligence from students and faculty were denied.

In an email, Dr. Fierro responded, “Rumors about athletics not following protocols are incorrect, students and staff have been following all protocols. I can’t disclose more information besides what was released. Personal information is protected.”

Football players declined to comment and the coach denied the request for an interview.

Fierro emphasized the college does not know what led to the outbreak on the football team.

The other cases that were reported on campus have no relation to the football team outbreak.

As the college expects to mandate the COVID-19 vaccine to all students and staff in the spring, the school predicts a decrease in COVID cases.

“The Public Health Department was complimentary of the work that had been done and had no further mandatory recommendations on what had to be done in order to operate,” concluded Fierro.

Information about fans attending the next football game in person was not provided.