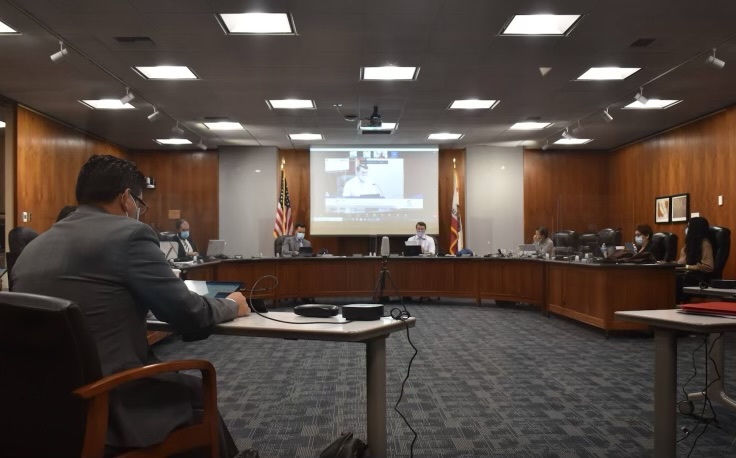 Dr. Jose Fierro, President/Superintendent discussed the data that was given during the 2021-22 convocation.

The data shows that the average student that started in 2016 is taking almost six years to complete their goal of an associate degree.

A component of this large delay is the fact that students are averaging 94 units to earn their degree while the statewide average is 85 units.

“We still have some work to do,” said Fierro as he discussed the average number of units accumulated.

The average student profile, based on averages from Spring 2021, shows that students are attempting an average of 9 units in the fall and spring semesters. They also wait a year and a half to take their first English Class and three years to take their first math class.

“We should do everything in our power to continue to increase these numbers,” said Fierro.

Although some of the numbers look bad, the number of degrees that the college has awarded increased approximately 86% in recent years.

Dr. Felipe Lopez, Vice President of Business Services, reported on the bond measures the district has. Measure CC, which was a $210M bond was fully expended on Dec. 2018 and Measure G which was approved in 2012 from $350M has $262M expended as of June 2020.

This leaves about $88M left on the bond. $46M of that $88M is planned for the performing arts, currently open projects, and two currently in design phase projects for the renovation of the Health Science building and the demolition of the Student Services & Administration building

Remaining is $42M left in un-committed money. This money is planned for the new Student Services building and for soils improvement to allow for the building on the area. This leaves a un-identified budget gap of $16M and will most likely lead to the district looking to put a bond measure on the 2022 ballot.

Future phases of this project would include an addition to Student Services, Administration, and a new gateway to the campus.

These bond measures have helped Cerritos College building 17 new buildings, majorly renovate 7 more buildings, and remodel 7 additional building. The college has a planned future budget, based on what they knew today, of $440M.

With the completion of the 2020 census, the board discussed local redistricting, which will affect the districts of students and who represents them within the board.

The district heard from the firm, Redistricting Partners, a firm that works under a master agreement with the Foundation for California Community Colleges to provide redistricting, demographics and voting rights act analysis.

The trustees requested that the district hold more than one meeting to allow plenty of access for public comments and ideas for forming the new districts.

The board will vote on the revised trustee areas in February 2022 and the deadline to pass the new map is February 28th, 2022.

The board approved and adopted a “break free from plastic” pledge. This pledge established a purchasing policy that eliminated campus and food vendor procurement of all non-essential, non-compostable, single-use disposable plastics, while keeping accessibility at the forefront of decision-making to ensure that accommodations are made for all users of the system.

The pledge also has the college committing to monitor plastic-free alternatives in future procurement decisions and policies regarding items that cannot currently be eliminated due to a lack of viable alternatives.

The college will also invest in education, resources, and infrastructure to assist in the Plastic-Free Campus transition.

Dennis Falcon, President of the Faculty Senate, reported that Faculty Senate voted to continue to meet virtually and renew that decision every 30 days.

On Nov. 30, the Faculty Senate will host Stephanie Curry, ASCCC curriculum chair, to discuss the many issues regarding the new area F, Ethnic Studies requirement in the CSU and UC system.

On Nov. 23 from 5-6 p.m., Professor John Macias and Lazaro Arvizu, Jr. will be hosting an event for Native American history month titled, ‘Where do you fit: an assessment of settler colonialism’.

Dr. Fierro announced that the Classified Employee of the Month in Monica Chora, a certified medical assistant with the student health services department.

“Monica has gone above and beyond in her role as a certified medical assistant. She has been working the front lines for Cerritos for the last 15 years and is the first face students see when walking into the department.”

The board went into a closed session to conference with labor negotiators and with no further business being in front of the board, declared that there would be no read out and the meeting was adjourned.