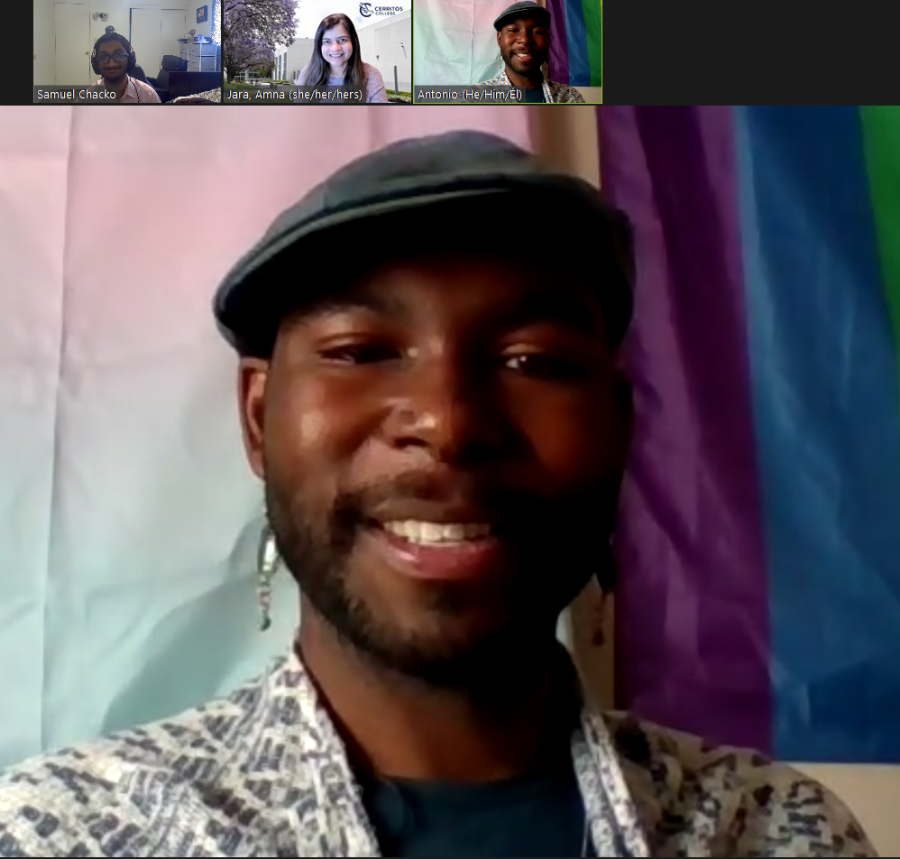 This is a picture of the organizers for the APIDA Awareness Week that takes place from Jan. 31st to Feb. 3rd. Amna Jara (also known as AJ) is in the middle while on the right is Antonio (also known as Neil).

APIDA awareness week starts Jan. 31st ending Feb. 3rd, with the objective to “seek to spread awareness to the campus community of APIDA cultures,” according to the Cerritos College website.

All of the events will be held via Zoom and more information can be found on the flier.

There was the great opportunity to meet with Amna Jara, AJ and Antonio or Neil who has he/him pronouns.

Neil has been a part of the Cerritos family for approximately a month and is a part of student equity and success. He loves nature, is a spiritual person, enjoys writing, singing and artistic projects.

Jara loves anything involving nature and is a part of student life, such as government, clubs and organizations that can be contacted through [email protected] for more information.

When asked about the importance of having an APIDA Awareness Week, Jara pointed out, “we felt like it was still important and relevant for us to share our experiences,” when referring to the Asian Pacific Islander hate recently rising.

Neil also talked about the awareness week, “I was invited to host the kickoff event and … I was honored,” where he explained the importance of showing awareness in a comfortable space.

Jara spoke on the importance of a community, “we want to make sure that all of us feel connected … creating a safe space … to talk about whatever is on their mind.”

Neil also echoes those thoughts and his aim is to, “create that space and start that dialogue.”

Neil talked about some of the struggles he dealt with, “one of the most challenging experiences was learning and discovering how to navigate my life as a person of intersectional identity.”

Neil had questions of being safe in a certain space, on any day and with any person. He explained it as “a constant check in the midst of navigating anxiety.”

Jara described her life, mentioning that she grew up in Pakistan, “I moved here as a teenager …and married a Mexican-American,” and talked about the disappointment that resulted in that decision.

Neil talked about his initial difficulties of coming out at a young age, “I think there is a certain disconnect between feeling like you belong and receiving messages from people.”

Elaborating he adding, “ I feel welcomed because I’m a person of color and other spaces,” and had a similar feeling of being welcomed or un-welcomed based on his sexuality.

When asked about some of the issues that need to be addressed, Jara stated, “Not all of us are radicals. Some of us just want to live regular lives here.”

Neil pointed out, “not all experiences are black and white,” bringing up the significance of having tough conversations. “To make a change, we have to talk about those issues.”

Neil’s main reason why one should join the APIDA Zoom and events is to gain more knowledge and insight on APIDA.

Some of the events that Neil and Jara suggest are teen dating violence, black history month and peers, dears, and queers – which are all coming soon. Jara also explained that there are monthly events as well.