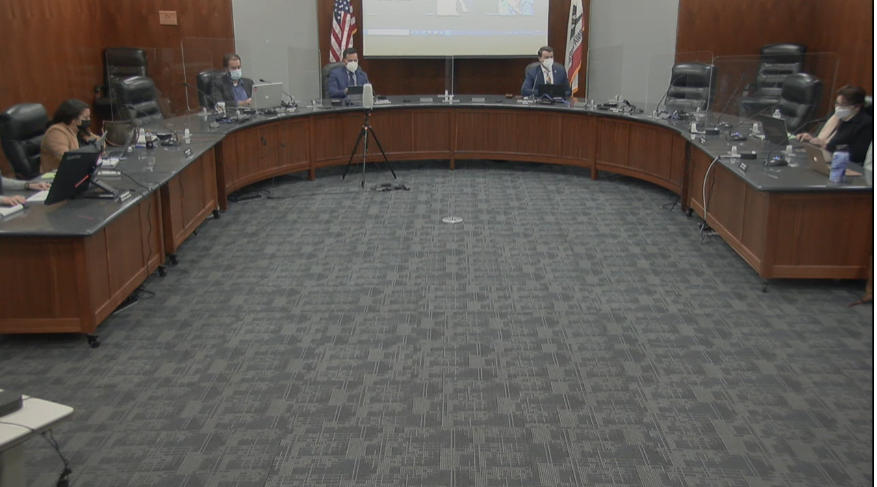 The first important item on the agenda was the reports and comments from constituency groups where the three speakers gave reports to the Board of Trustees.

The faculty senate president, Dennis Falcon, explained how the senate passed a resolution claiming, “faculty have the primary role when it comes to scheduling for the betterment (and) for the good of our students.”

After Falcon gave his report and comments, Lynn Wang (CCFF president) then shared her comments with the Board of Trustees.

Wang starts by saying the CCFF is here, “to urge you to support our economic proposal and continue to negotiate with CCFF in good faith.”

The CCFF president then explains, “During our negotiation meeting on Oct. 20th, 2021, vice president Lopez indicated that, ‘we’re coming off a strong year. We have [a] 7 million dollar surplus made up by decreasing in expenses’.”

Wang pointed out that even though the college had a down year in the 2021-22 school (in enrollment), the college is still projecting a surplus.

“It’s clear that the college is doing quite well financially,” Wang said, “Why does the district think faculty are only worth off-schedule stipends for the next three years?”

“The college is not committed to equity compensating our most diverse workforce,” Wang explained, “the college is holding state-provided cost of living increases hostage.”

Wang then ended on a good note by talking about the improvements that were made, which were protected healthcare for all employees, sick leave, improving the collective bargaining agreement and agreeing to ten MOUs.

To learn more information on the CCFF president and the negotiations, check out the article talking about the Union Negotiations.

Lopez pointed out, “how can we support our students when we ourselves, as classified employees, need to use your foodbank services?”

Most of the voicemails that were played talked about COLA+, cost of living adjustments due to inflation when asked for the district to act in good faith bargaining.

After those voicemails, Jemery Ramos was then installed as Student Trustee for the remainder of the school year (2021-2022), Ronda Gartell, Administrative Clerk III retired and shared a legislative update.

The board of Ttustees passed The Los Angeles County Metropolitan Transportation Authority contract, which can help transport students; Sabbatical Leave Reports and Board Policies Review (policies 2432, 2510, 2550 and 2610).

Provisions of AB 316, was rejected by the Board of Trustees, which allows for virtual meetings and not having the majority of the board in-person.

The final main agenda item was when the nominee for Chancellor’s Office 2022 classified Employee of the Year Award, America Amado, was officially verified by the Board of Trustees.

Overall, the most impactful and important part of the recent board meeting was the comments made by Falcon, Wang, Lopez and some Cerritos college staff.