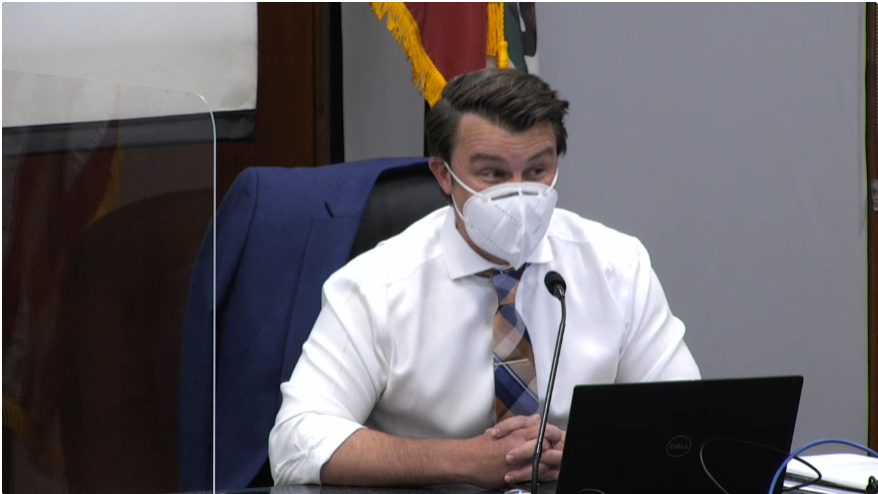 This was the second, and last trustee who gave comments responding to faculty and the students, Trustee Birkey. Trustee Birkey gave his comments on April 20th's faculty senate to clear up some concerns faculty and students had regarding COLA+. Photo credit: Samuel Chacko

Before the board meeting took place, there was an informational picket on the corner of Alondra and Studebaker from 5 p.m. to 6:30 p.m.

As usual, the comments from the faculty and students were the strongest part of the board meeting.

The first person who spoke during the board meeting was Irlanda Lopez, California School Employees Association president.

“I would like to have my son home for future board meetings but I think the way things are going, we’re going to be here on a nightly basis,” said Irlanda Lopez “We need to be able to know that they can provide food on the table to their families that they can pay for gas to go to work – We’re not here to be greedy, we just want our cost of living to go up [based on inflation].”

Sam Shabbot, a student from the college explained that he utilized tons of office hours because of his disability and he was in full support of paid office hours.

“Please grant them the COLA, it’s really important for them and it’s important for me as a student to know that the faculty that are teaching me are taking care of,” Shabbot said.

Henrietta Hurtado, who is the Chicano Studies Chair, also showed her support for CCFF and COLA+. Hurtado constantly said, “faculty working conditions are student learning conditions,” which was a theme for all of the comments that were heard and repeated by the audience and many of the speakers.

Anna DeMichelle, who is a full time faculty member who is the Chair of the Department of Music, started her speech by saying, “Given the current circumstances, I can no longer stay silent. I am extremely disappointed and somewhat offended that the district will not be in good faith with the Cerritos College Faculty Federation (CCFF).”

“The district’s negotiation team and Dr. Fierro will assure you that the one (and only) economic package is more appropriate. This inflation that we’re experiencing is crippling and ongoing,” said April Bracamontes CCFF Vice President.

Bracamontes also gave examples of other schools giving faculty raises, “El Camino got a 7.2% and Rio Honda got COLA +1 and last year … LBCC got 4.2%, these are our cohorts.”

These are the few comments that we’re shared and there were about 20 public comments submitted.

Before Trustee President Birkey gave his statement Ms. Rosenblatt asked that the current ASCC President and Vice President share a few words, President Birkey denied the request due to being unaware they had planned to speak which was later overruled by tustee Perez.

In response, trustee Birkey outlined that there were a number of factual errors in some of the material, and a number of errors in the way in which certain points had been made both tonight and at other times.

Birkey did not elaborate or clarify what these errors were.

“The truth is that we care dearly and we have been fair and reasonable,” Birkey said, “We agreed to provide the faculty and their dependents with 100 percent healthcare coverage … and we also gave $6000 stipends … regardless of whether they were part-time or not.”

“Our faculty salary benefits have remained close to the top of the list among similar districts,” trustee Perez said, “we have remained at the bargaining table.”

Those were the only two trustees who had a comment and was rained with boos and people chanting lies while they were speaking.

While it’s a he said, she said, the only thing we can do is wait and see if there will be any positive updates.