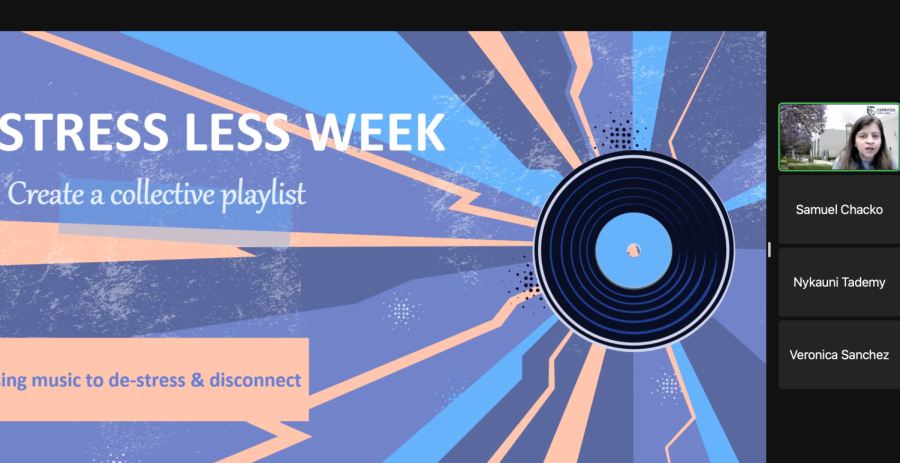 This photo was taken during the "Stress Less Week," which took place on May 9th. They created a playlist of songs to help de-stress before finals week. Photo credit: Samuel Chacko

There was a “Let’s Talk About Stress” event that took place via zoom on May 9th where students gave songs that they can add to their cumulative playlist.

The first event, creating a playlist, was cut short due to the password being incorrect on the flyer, which ended up being fixed.

Amna Jara, who is the Student Activities Coordinator for students’ life, was the presenter for the first zoom meeting.

The purpose of this event was to destress students before finals week begins.

They made a cumulative playlist that they used which consists of meditation music and sometimes thought-provoking lyrics.

The three songs that were added were, “Songbird by Kenny G.”, “Cherish the Day by Sade” and “Ribbon in the Sky by Stevie Wonder.”

“This is a great way to start my Monday,” Dr. Veronica Sanchez, a full-time faculty member of the psychology department, said.

During the short time, the event was, the songs that were suggested were played in the meetings.

After the meeting was over, Sanchez gave an anecdote on music and how it helped her get out of tough times.

“There was a summer I was down and I watched Rocky,” Sanchez said, “The (song) “Eye of the Tiger” did the trick.”

The Spotify playlist is a collective of songs that students suggested to Jara, which have tons of variety. The playlist consists of Demi Lovato, Niki Minaj, Bruno Mars to classic artists like Michael Jackson.

Jara said that if you want to add to that playlist, to contact her and she’ll be glad to add on more songs.

Jara had some ideas for other events like virtual bingo or movie night, which she explained that movie night may be tough to implement.

The Student Activities Coordinator told a story about how she did a virtual bingo event with one of their departments who wanted to learn more about Students Activities, which “they jumped into bingo.”

“You’ll never know who you’ll meet,” Jara said, “You don’t even have to speak or put your camera on (we won’t put you on the spot).”

Jara then explained the purpose of these events, which is to keep students connected.

“Check out clubs and organizations active through a cite called Falconsync,” the Student Activities Coordinator said.

Jara also said that they’re recruiting for student government in the fall and for the falcon leadership institute (to enhance leadership).

Stress Less Week is continuing and if you want more information on the upcoming zoom events, here’s the link to the calendar and the flyer.

For more information regarding Student Activities, follow @FalconStudentLife and @CerritosStudentGov.