Why are we left in the dark? 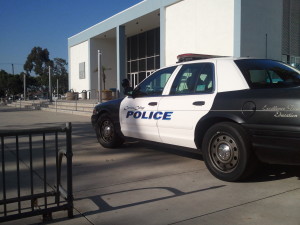 Without a free and informed press, the student body here at Cerritos College would have never known there was a heavily armed man named Steve Miller on campus that had to be removed after threatening theater faculty and possessing the weaponry to back it up.

On April 17, a report filed by the Los Angeles Sheriffs Department of an incident that took place, April 16. The report tells of a disgruntled cast member Miller grabbing somebody, identified in the police report as Victim 1 in the Theater Department then threatening the Theater Department Manager Etta Walton by saying ‘‘Etta is a {expletive} and I would cut her” and added; “I did it before.”

The same report has somebody identifiable only as Respondent 2 telling deputies that Miller has brought a sharpened dagger type knife and a pump action shotgun he wanted to use as props. Respondent 2 couldn’t tell if they were real or fake.

Bringing daggers and shot guns to campus? Why were Campus Police not informed the first time Miller showed up with gun “props”?

The second police report tells of Miller showing up for school the next day with weapons in his possession;

Miller was immediately arrested, and so was anybody’s ability to comment. The Director of the play, John Zamora, was interviewed by News Editor Enrique Rivera who asked about what had taken place on April 16 and 17. “I have nothing to say about it’’ was his repeated response.

The Safety Alert issued by Cerritos College Police Department was sent out by email and posted on fliers telling of a nameless person found on campus with an illegal firearm.

The statement also states that the individual “has not made any threats against the campus community.” This is especially disturbing since the official police reports state clearly that Miller did make a threat toward Walton and was in possession of one firearm but no mention of the two knives and the 14 live rounds ready to be fired and reloaded.

Nothing to say? Not going to talk about it? Is Miller not a threat to us all? Why the silence?

The Theater Department needs to realize this incident is no longer just about its department, its play or comfort level.

This is about the safety of each and every student and faculty member that walks the same grounds every day. Information crucial to safety decision making by students shouldn’t be stunted by a department that thinks we should mind our own business.

Let this be clear; News is our business. Getting information to the rest of the student body that directly affects its health and safety is our business, too.

Without information and cooperation by all departments, including our Campus Police, risks personal safety and preventable tragedy if not done in a timely manner. Our very lives depend on it.