Choosing race over ethics only creates a bigger problem 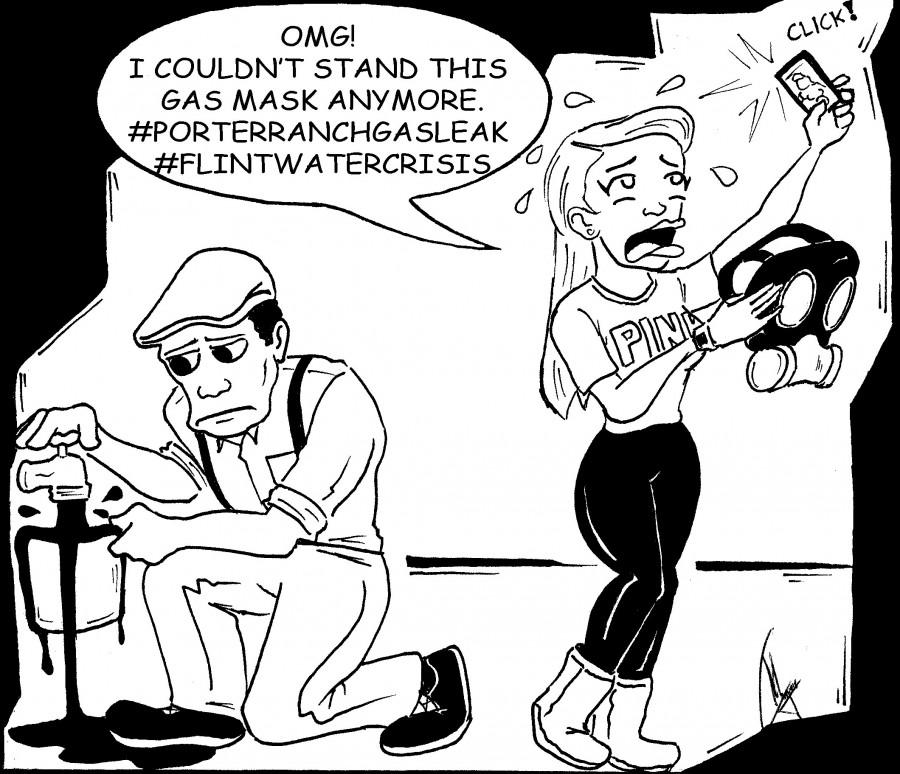 Imagine if you lived in a city where the very air you breathe wasn’t clean and you couldn’t hide in your house to get away from it. Toxic air is not only invisible, but also virtually inescapable.

What if the water supply in your house was as toxic as the gas you put in your car?

Water and air are the two things needed for life. Without it, we’re at ground zero for a human extinction.

The Porter Ranch, California gas leak and the Flint, Michigan water crisis seem like relatively new issues. However, the residents of these two very different communities have been suffering from major toxicity issues for a long time.

According to latimes.com, Porter Ranch is made up of an upscale Caucasian community. On the other hand Flint’s residents are 40 percent African American and is known to be a poor city.

Race should never be a factor when it comes to the welfare of human beings.

According to nbclosangeles.com, the Porter Ranch gas leak was first discovered on Oct. 23, 2015 while the Flint Michigan water problem began on Apr. 25, 2014.

Although, both are pressing issues and both city’s residents are suffering, why is it that Porter Ranch’s problem is getting solved quicker than Flints?

When local and state officials, in both communities, failed to take the necessary actions to control the situations the national government should have stepped in.

According to cnn.com, the U.S. Attorney’s Office is investigating the problem and a plan is under way to fix the water.

In Porter Ranch, over 2,800 residents were relocated for safety reasons, and some students were moved to schools in different areas.

The Southern California gas company has been working since December to fix the leak. The company is expecting to have the leak fixed by sometime in February.

Mlive.com reported that Flint, Michigan’s problem began when the Flint city council agreed to stop buying water from Detroit, and join a new project where the city would be able receive water from Lake Huron without having to buy from Detroit.

Soon after, Detroit informed Flint that it would stop selling the city water in April 2014. Unfortunately, the project wouldn’t be ready for at least three years.

Flint was faced with the pressing issue of being able to provide running water to the city’s residents.

State-appointed emergency manager, Darnell Earley, implemented a plan for Flint to receive water from the Flint River. The water was to be treated before distribution.

However, there was a problem with the filtration system and after the city of Flint began to receive their drinking water from the river the residents began to complain about smell and taste.

Mayor of Flint, Dayne Walling, kept reassuring residents that the water was safe to drink.

After it was discovered that the toxicity level in the water was above the safe amount that the law allowed, a letter was sent to residents on Jan. 2, 2015, informing them that the water violated the Safe Drinking Water Act.

With the letter now putting residents in full awareness of the situation, the city council was demanding to stop using water from the river.

Things only continued to go down hill from there. Many residents are now suffering from lead poisoning, skin lesions, and other terrible afflictions.

Why is it that we’re just hearing about these problems now? Why does it appear to look like Porter Ranch is getting its leak taken care of quicker than Flint Michigan?

How do you put a label on which issue is of more importance than the other?

It’s apparent that these two different neighborhoods are receiving completely different treatment.If you compare the two, it looks as though race is playing a big role in how the situations are being handled.

But, it seems like this problem didn’t begin to get taken seriously until it received the media’s attention.

When it comes down to it, when a major problem arises like this in America, the problem should be handled with the same level of intensity regardless of race, income, and social standings.