16-week calendar, the only calendar that should matter 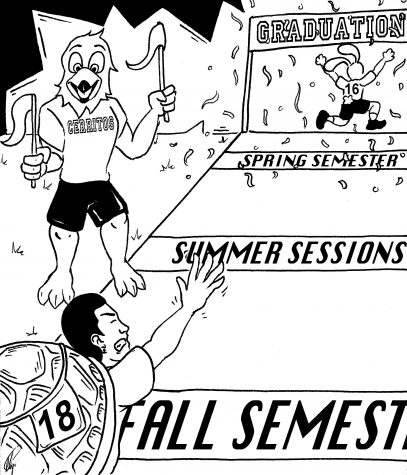 The mission of any higher education system should be to provide its students with the best education and the opportunity to retain such education in the most efficient way possible.

In the end, the ultimate goal for any student — whether in a four-year institution or community college — is to graduate and move on to the next chapter in their life.

It is the job of the staff, faculty and administration of those schools to make sure that that goal is achieved. This job includes the administration deciding the length of the academic calendar the students will have, and for the rest of the faculty and staff to follow suit.

Here at Cerritos College, for over a decade, there has been on and off discussion about changing from the already set 18-week calendar to a 16-week calendar.

Finally, the idea is being pushed forward through the proper channels, and was tentatively approved by the school’s Board of Trustees at the Wed., Mar. 1 meeting.

A 16-week calendar is an impeccable and highly logic idea that would have immense benefits for the students of the college.

The fact that it has taken this long to be pushed through and for the logistics to be worked out is honestly quite idiotic and has more to do with the school’s financial situation than the welfare of the students.

It’s time the school stop pussy-footing around this idea and just roll with it already.

The key advantages for the students would be the addition of a Winter session and the bringing back of Saturday classes.

The compressed calendar will also add more Friday classes and have the possibility of extending the hours in which classes will be held. This means that classes will be offered early in the morning, and will end later in the night.

With the additional campus hours, and class times, the school would also have to include more office hours; meaning that the financial aid department, counseling offices and library will also be extending their hours as students who take those classes will also need services.

These benefits alone should grab the board and the district’s attention enough to listen, review and push forward the new and improved calendar.

However, the compressed calendar does pose a few inconveniences to some of the programs on campus, more specifically to the Health Occupations programs.

The main problem this calendar poses for the programs is the ability for its students to fulfill the off-campus lab hours needed for their areas of study.

However, most of the schools in the Cerritos College area have successfully adjusted their programs, or have chosen to keep them on 18-week calendar. Cerritos College should be able to do the same.

Another minor drawback that the calendar poses is for students who find that a longer semester aids them in their retention and success throughout a course.

This problem has already been addressed in a sense because there will already be additional resources on campus.

The already added hours to the success center and counseling departments will be able to help those students who may struggle adjusting to the compressed calendar.

Setting cost aside, there is no reason for the school to oppose the idea of a compressed calendar.

Money has been the root of many issues in the world and has ultimately led to many people’s downfalls.

Do not let it be the downfall of a student’s educational future and success.

Yes, money is great and we need it to function in society; but let’s not put the need for it ahead of the student’s future.

Help students thrive; because without them, this school wouldn’t be where it is today.