Vote for the right cause 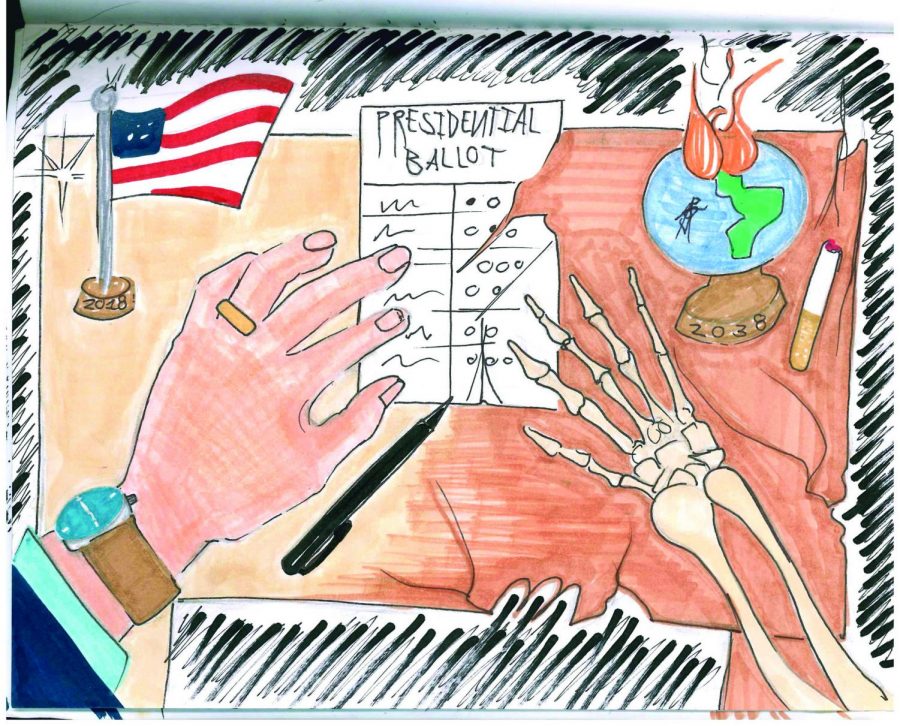 Recent hurricanes like Michael, which wreaked major havoc throughout Florida, demonstrates that we can no longer ignore climate change, we must pump the brakes on fossil fuel emissions and start rethinking on how we can help reduce these emissions.

The United Nations have unveiled a grim report by the Intergovernmental Panel on Climate Change on Oct. 8 declaring that humanity only has till 2030 to limit global warming by 1.5°C so future children don’t have to live in an actual post-apocalyptic world.

By now you’re probably thinking, “I’m sick of hearing about climate change! It’s already too late for us to make a difference.”

It’s only natural that pessimism kicks in and we’re left with dread and hopelessness as this inescapable warning threatens our world.

The point of the IPCC report is to inform the public that we still have a chance to limit fossil fuel resources – from how we produce food, what we put on our land, to how we generate and use energy.

Taking action is the best way to combat these feelings and you’ll be doing the world a big favor like reducing meat consumption, carpooling to work or school, if that’s not your thing there’s always cycling and other modes of transportation, buy energy-efficient light bulbs, do the good ole reuse, reduce, recycle system.

The little things we can do can help the bigger problem, however, we must realize that the major polluters are the fossil fuel and energy corporations along with our government who enable these corporate giants to do what they want.

Climate change policy shouldn’t be considered as a partisan issue that only one party supports and not the other.

It is an important issue to all Americans, it’s a human rights issue. It will affect the most vulnerable people, animals and our ecosystems first and the hardest.

We cannot keep deniers of climate control to keep running our government any longer, we must vote them out of office so there can finally be some actual climate change policies taken place.

Politicians are putting Americans in danger by not doing anything and just blindly continue to ignore that climate change is a serious threat to our world.

It is urgent for young voters to really get out there are vote in the 2018 midterm elections which take place this Nov. 6.

Whether you affiliate with either the Democratic or Republican party, your vote matters and really makes a difference.

Millennials have been politically active lately and it is our duty as educated college students to spread the word on registering and voting this year.

The 2016 presidential election showed a spike in young voters so with that being said, it is emphasized to do your research and vote for a candidate who highlights the important issues that you believe should be taken seriously.

Even though, climate change isn’t a number one issue discussed in politics, it should always be a concern for people who truly care about the environment and ensure that the candidate supports climate change.

One candidate who is in favor of saving the environment is Harley Rouda.

Again, climate change is brushed off by political leaders, but this Democratic politician is taking a step forward on the importance of saving the environment.

Be serious about wanting to make a difference in our economy and in our political system.

As young Americans, we must use our rights and take advantage of our adolescent aspiring attitudes in bettering our government and vote for someone who challenges other politicians issues and policies that do not benefit the environment or the people.