Stop the demonization of the migrants, blame their homeland’s governments! 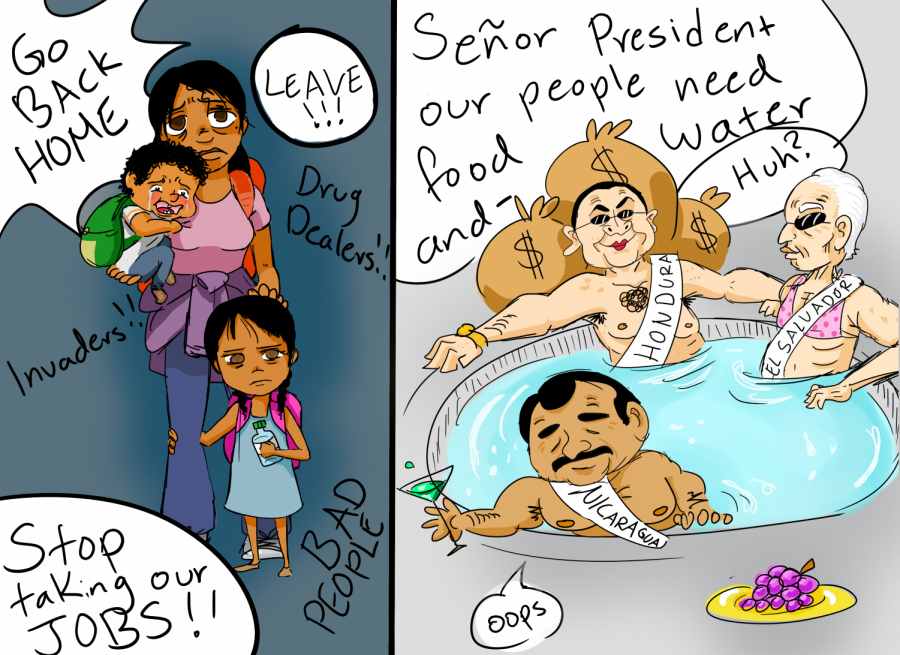 In past weeks President Donald Trump and his conservative minions have been doing nothing but complain and demonize the current Central American migrant caravan by calling them “invaders.”

The real group of people that Trump and conservatives should point fingers at are the Honduran, Salvadoran and Guatemalan governments who are responsible for not looking out after their citizens.

The United States is also responsible for the crisis due to past involvement with Central American countries by supporting, funding wars and sending aid money to prevent from turning into communist countries.

As a long term consequence, the real reason these countries are “third world” is because the governments keeps all the aid money to themselves and ignore their people.

The United States government is no saint in this problem and should take responsibility of the consequences.

People in the migrant caravan are escaping violence, hunger, poverty and corruption from their native countries and joining this caravan is the only opportunity to flee their country.

The majority of these migrants have no resources to request political asylum and do whatever they can without help to escape from their countries.

It’s disgusting to hear complaints from many far-right conservatives and republicans about how these “invaders” are breaking the law and feel entitled to enter the country.

These people also love to criticize developing countries and their governments as well as the people by expressing how they should go back and fix their countries as if it is an easy task.

Hey, far-right wingers it is easy for you to to complain and criticize other countries when are all your life you been living in a privileged developed country with no experience on what’s it like to suffer from extreme poverty and persecution.

Poverty in the United States is way different than in other countries where the government does not help their citizens for anything.

It is easy to complain and criticize when most of these people live in better conditions when they have no idea of what’s really going on outside the country.

The truth is that, unlike the United States, peaceful protest does not work in most Latin American countries.

Since protesting often leads to chaos, the government does not bother to hear from their citizens.

It is also absurd to hear crazy assumptions that are most likely not true such as when President Trump assumed that Middle Eastern terrorists and gang members from MS-13 were hidden in the caravan.

First of all, where is the evidence that middle eastern terrorists and gang members are in the caravan?

President Trump’s statement is invalid, he cannot assume anything without actual evidence.

It is ridiculous to bring up assumptions that paint all migrants as criminals and fuel foolish conspiracy theories which are far from the truth.

If President Trump wants to fix this migrant crisis then stop sending aid money to these countries and talk some sense into the Central American governments to actually do their job to take responsibility looking after their citizens.

An immigration reform is also another task that President Trump must find a way to do so that people can come into the country without breaking any laws and the process can be faster.

The United States cannot keep this migrant crisis as a political topic to get more votes and power there has to be a solution to this including taking responsibility of a long-term consequence.