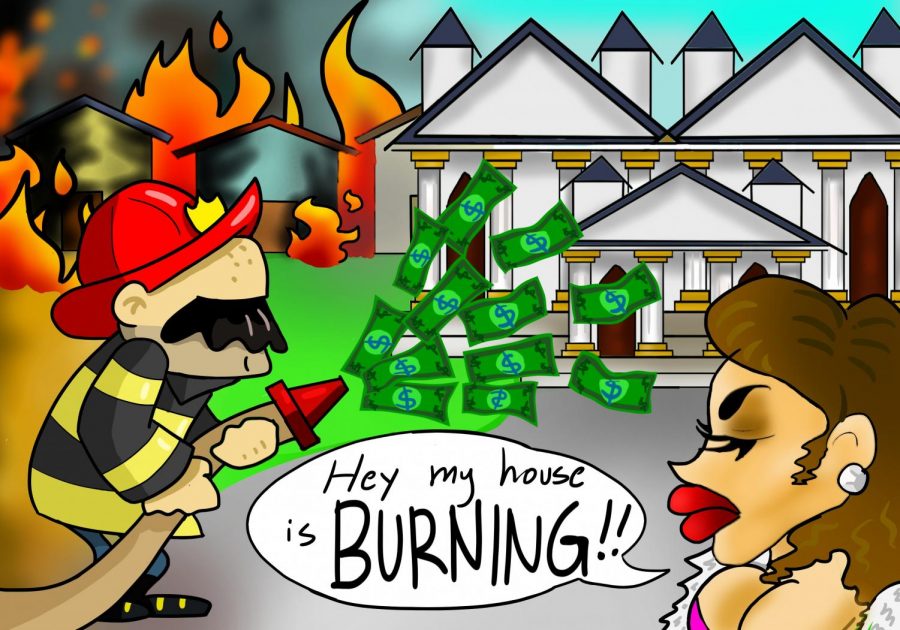 California is seeing its first snow, in the form of ash and soot. The wildfires we are facing are a result of corporate greed as well as lack of resources , and unless we fight for change, we will soon be consumed by the blazes.

As climate change continues to ravage the planet, California has been and will be hit with ever increasing warmer weather and dryer conditions. Our already lengthy wildfire seasons will grow hotter and longer.

While many wildfires are caused by humans (often through negligence, corporate or otherwise), the changing climate will also be the result of tinderbox-like conditions, exacerbating our already serious struggles with raging fires.

These issues and their consequences will not be distributed equally, however. Those with wealth and privilege are able to escape the flames, both literally and metaphorically.

Already, poor and working-class Northern Californians have been denied homeowners insurance due to the risks of fires. This problem may peeve those with a significant amount of capital but could be life-devastating for those with less wealth and fewer options.

Utility corporations are responsible for some of the most horrendous “natural disasters” in California’s modern history. Despite this fact, they have enormous power over policy makers and the decisions made in the face of wildfires.

While these companies cut corners to boost profits, the average person is left with the results. California taxpayers are forced to cover the companies’ costs in paying out damages, as the alternative is the dissolution of the companies altogether.

This is the relationship that power and wealth has going into our seemingly inescapable future of more deadly fires. Rather than localizing and democratizing energy (which should be considered a basic right), we will continue to cover the profit margins of the rich as their failures light up the very earth and air around us.

Those people with wealth try to escape the metropolis by settling down their roots in the outskirts of the city. With that in mind, it is almost as if they are “tempting” fate. It’s hard to feel some sort of sadness for them when they are moving into areas that are already known to face potential ravenous wildfires.

As the fire seasons get longer and the fires get more intense, it’s hard to empathize with those who have chosen to start a life in this potential hellscape.

Cities such as Calabasas are a haven for those with wealth of some sort. Either inherited or out of sheer celebrity, they choose to go into voluntary isolation from common people, a fireproof fortress of their own creation .

Although the “very stable genius” in the White House denies the existence of climate change, it is certainly happening and it’s certainly happening in our own backyards. While some folks in urban areas end up waving a simple garden hose to protect themselves, others with wealth and prosperity choose to hire entities such as private fire departments to prevent the fire from getting into (or even near) where they live.

It’s people such as the Kardashians that make it hard for a person with minimal means of protection to feel any type of emotion towards. These people have literal cash to burn, whilst the everyday person worries about the smallest spark setting their life ablaze.

Though it may seem cold amidst this blaze, we must remind ourselves that the wealthy are more than capable of fending for themselves, and we must worry about those who are closest to us .

We must ensure friends, neighbors and family have adequate preparations in the event of wildfires spreading to them.

We must be the spark of the people, and ignite the fires of change, before the Golden State becomes a burnt wasteland.