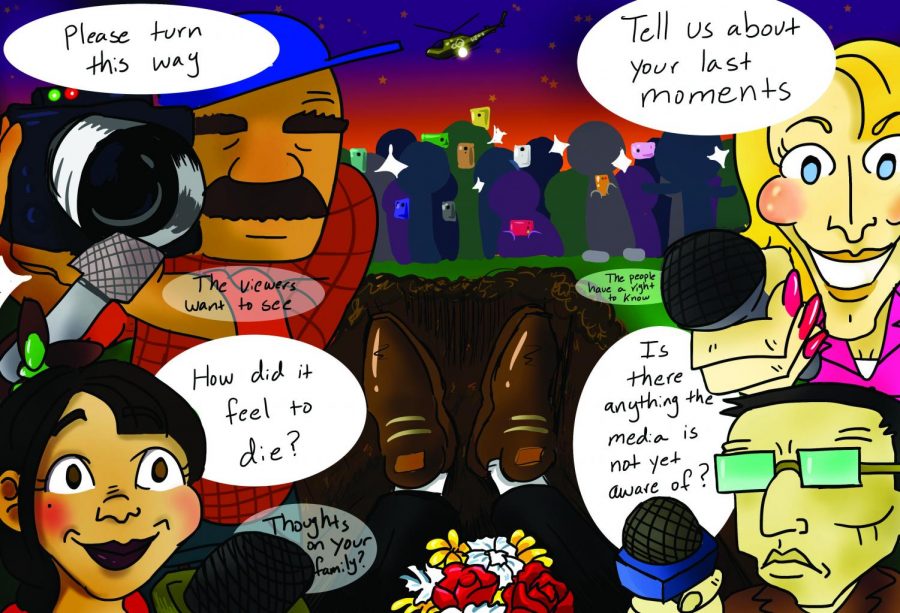 Every day, the media is battling a fierce competition, a fight that has no rules and no boundaries so long as it circulates hundreds of billions of dollars each year. Internet, TV, radio, social media and print sources are all in constant pursuit of your attention, which is why we should be more mindful of who we pay it to.

Vanessa Bryant lost her husband, Kobe, and 13 year-old daughter, Gianna, in a horrendously tragic helicopter crash early in the morning of Jan. 26. This news was delivered to the Bryant family via a hastily written article by TMZ, whose sources included some of the first responders near the crash site.

According to a public statement made by L.A. County Sheriff Alex Villanueva, the notorious media outlet had published the story before authorities were able to confirm the basketball star’s (or any of the victims’) identity that Sunday morning.

In the the following days, Harvey Levin, a controversial television personality and producer on TMZ, made a series of television appearances to respond to critics saying that his organization acted out of line when publishing the story without official confirmation or alerting the Bryant family.

On Jan. 29, Levin talked on daytime talk show ‘The Real’ where he claimed he did contact the Bryant estate. “We were on the phone with various people from Kobe’s camp for an hour before we posted the story,” he said, “When somebody of that magnitude dies so tragically, this becomes a world-wide, massive story.”

Levin has yet to reveal who exactly he spoke with in ‘Kobe’s camp,’ but Kobe Inc. President Molly Carter released a statement saying “To this point, no one has been authorized to speak on behalf of the family regarding any personal details surrounding Sunday’s tragedy, including stories related to the family’s previous air travel decisions.”

This raises questions on whether or not TMZ’s contact was qualified to confirm sensitive information of that degree. Despite this, the story itself was true, and Levin’s defense suggested that he felt he is being singled out for doing what every media outlet did that Sunday.

That assertion is not exactly warranted, considering that the vast majority of news stations used TMZ’s breaking news coverage for their own stories. TMZ did not have to wait to speak with authorities, or lawyers or any public officials to verify this story because they have never been a reputable source of news in its 16-year history.

This type of sensational journalism is just a side effect of a much bigger issue. Understand that these outlets solely exist to capitalize on our demand for violence, especially when it involves celebrities, regardless of how gorey and graphic the details may be. We possess an intense craving for provocative and shocking news and TMZ satiates that.

Harvey Levin commented that the Kobe crash was the most heavily trafficked article that TMZ has seen, “even bigger than Michael Jackson,” he remarked. Like many sources, they kept reporting on it because it kept receiving views.

TV stations gave the Kobe crash hours of uninterrupted airtime, numbers of casualties fluctuated from 5 to 10 to 9, including one ABC new anchor erroneously reporting that all four of Kobe’s daughters were on the helicopter when it crashed.

It was not long before news outlets resorted to calling and interviewing countless celebrities and journalists to make official comments on the Kobe tragedy. What viewers endured then was the same somber, heart-broken reaction again and again and again.

The question we must ask ourselves is: how much information is too much?

Kobe Bryant was an important icon to the city of Los Angeles and to basketball fans everywhere, but his celebrity status does not entitle us to each and every detail of his death, or of the current emotional state of his family. The vast majority of people have never been asked to make a public release statement following the death of a loved one.

Thousands of social media posts by fans show them honoring the basketball star by shooting buckets, mourning at the Kobe memorial and preaching his legendary Mamba Mentality, which focuses on the relentless pursuit of self improvement. I think the way we can all truly honor Bryant is by respecting his family’s wishes for privacy, and by remembering this moment in the future, so that we may support the journalists that tell the truth without discarding their decency.