The Pink Tax will only lead to more red 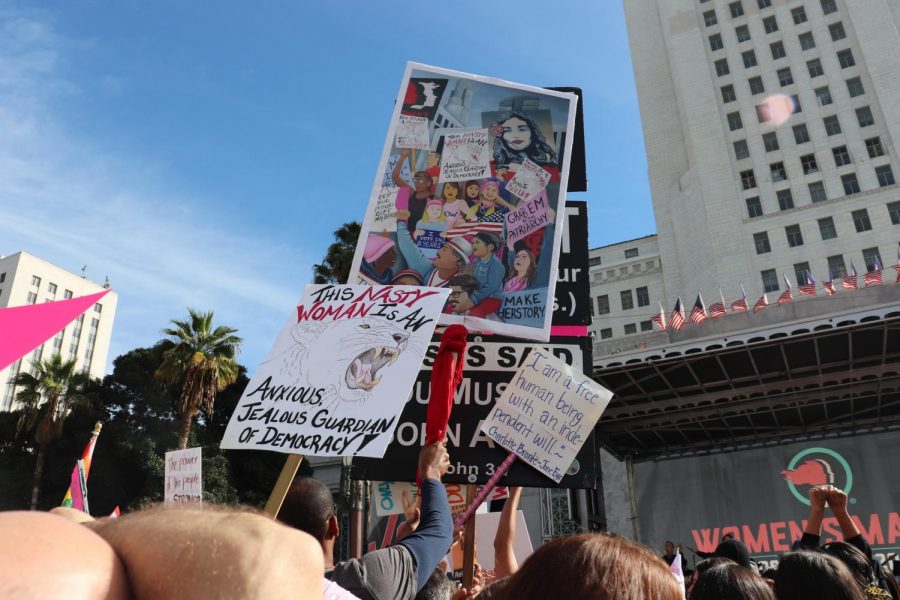 Some of the many posters and signs people carried around on display during the Women's March. The Women's March started at Pershing Square in Downtown LA and ended in front of City Hall with a rally on Jan.18,2020. Photo credit: Jazmin Aguayo

As The Scottish parliament approves plans to make sanitary products free for all women in its nation, the “advanced” nation of the U.S. continues to let its laws be ruled by men who genuinely seem to believe that having a period is a choice.

Femine hygiene products such as sanitary napkins and tampons are being taxed statewide and at a federal level as if they’re luxury items, when really they should be seen as necessities.

10 states within the country, including California, have already made efforts to get rid of the “Pink Tax” also known as the “Tampon Tax.”

Rewire News wrote an article on Aug. 31 stating, “A new report from the U.S. Government Accountability Office confirms that products targetting women consumers cost more than the men’s equivalent a whopping 50% of the time.”

In fact, Viagra is not taxed. Condoms are inexpensive and often times handed out for free. A monthly bodily function, however, costs around $8 a month.

Is it more important for a man to be able to get an erection than a woman being able to stay clean while blood is coming out of their uterus?

According to the office of Assembly woman Cristina Garcia, a politician who fought to get rid of the pink tax, the cost of sanitary products for women adds up to over $20 million annually in taxes statewide.

Millions of dollars being spent just so women can keep clean and prevent leaving every area they are in covered in a bloody mess. If that seems gross, then it’s understood why these products are necessary.

What other choice do women have? Let the red rivers flow?

This country likes to think it’s ahead of the game but Scotland’s passing of The Period Products (Free Provision) Scotland Bill just proved otherwise. It is the first nation in the world to make sanitary products free and available to all its women.

Lawmaker Alison Johnstone asked, “Why is it in 2020 that toilet paper is seen as a necessity but period products aren’t? Being financially penalised for a natural bodily function is not equitable or just.”

The bill’s prosper Monica Lennon explained that the approval of free menstrual products is “sending out that real signal to people in this country about how seriously parliament takes gender equality.”

The U.S. should learn a thing or two from Scotland.

If this country wants to prove it cares about its women, it needs to address the fact that they’re being taxed for existing. Truly, that’s what it is: existing with a vagina comes with monthly blood spills. It is not a conscious choice we make.

“Let me bleed all over my clothes,” is not what we say. In fact, we say, “I hope I didn’t stain.” Women shouldn’t have to feel guilty about these periods and drain their wallets, too.

The United States, as a unit, needs to get on board and continue to fight for the removal of taxing menstrual products nationwide.

Women, keep fighting. Keep rallying. Change is bound to come when the country eventually learns that the costs of these period taxes will only lead to anger. And lots of red.