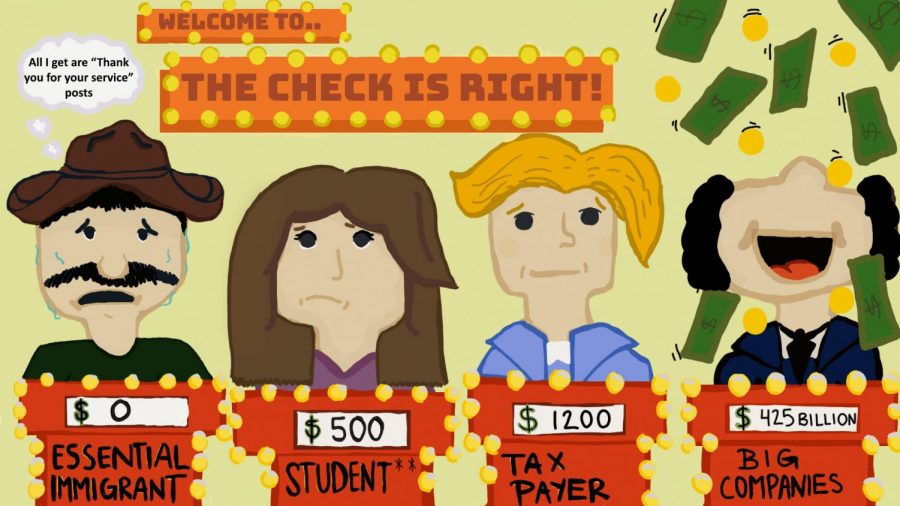 America is facing a 'pandemic-induced recession' that a $1,200 stimulus can't prevent. While mega corporations enjoy a bailout out from our dime, essential workers are left in the dust.

Unemployment is skyrocketing as the COVID-19 pandemic continues to ravage the United States, causing the most devastating job loss since the Great Depression.

The federal government’s response to this unprecedented crisis is a $1,200 stimulus check for qualifying taxpayers. That is not enough to stave off an impending economic collapse!

Since the United States first declared the Coronavirus pandemic a national emergency, more than 22 million Americans have filed for unemployment aid.

The consequences of an economic crisis of this magnitude are predicted by some experts to last up to five years after the country’s eventual reopening.

California Governor Gavin Newsom called the economic downturn a “pandemic-induced recession.” A Los Angeles Times article reports that less than half of the residents in LA county still have a job.

The millions of new applicants have overwhelmed unemployment agencies across the country, causing a number of backups and delays that only worsen the situation in struggling households.

As several governors begin to unveil their plans to reopen their state’s economy, qualifying Americans are receiving the first distributed stimulus payments since President Trump originally signed the $2 trillion stimulus.

According to the Washington Post, the checks are primarily going toward gas, bills and food purchases.

Single heads of households are expected to receive a $1,200 payment and married couples will get $2,400.

Parents are granted an extra $500 for children under 17 years old claimed as dependents but college students aren’t allowed to receive this benefit if their parents claim them as dependents on their taxes.

The Coronavirus health crisis is creating an economic crisis and the president’s delayed response for the country as a whole is a disservice to the United States.

COVID-19 put a stop to thousands of businesses and organizations leaving millions of Americans filing for unemployment benefits.

An article by the Washington Post states, “A Treasury spokeswoman noted the IRS processed nearly 80 million payments in less than three weeks.”

There are 150 million payments expected to go out under the Economic Impact Payment program.

Undocumented immigrants are excluded from the federal stimulus package despite contributing billions of taxpayer dollars annually, funding schools, being taxpayers, students and overall contributors to society.

They serve a critical role in providing the food to be distributed to Americans in need, whether it be to food banks, grocery stores or farmer’s markets.

Immigrants are known to work in the crop fields of California and other states that are needed now more than ever.

They are only some of the essential workers of the time and they aren’t receiving the help they desperately need during the pandemic.

Mayor Eric Garcetti announced the release of the Angeleno Card for in-need households in Los Angeles that will provide financial assistance through a no-fee prepaid card provided by Mastercard in amounts ranging from $700-$1500 determined by need.

Applicants weren’t required to disclose immigration status for the money and in order to be eligible for assistance there were only three requirements: households must be in the city of Los Angeles, total household income fell below poverty level prior to COVID-19 and at least one household member has lost a job or experienced a reduction in income of at least 50%.

We are still under the stay at home order by governor Newsom until May 15. When the order is lifted, we will have to adjust to a “new normal” until it is safe for us to go back to our lives before the pandemic.

Unemployment benefits have been expanded 13 weeks by the federal government until December 2020.

This is how long people are expected to be unemployed until around the end of the year, depending on how people fight to flatten the curve.

In the wake of an unprecedented crisis, Americans should be able to rely on their government to protect them from financial disaster but the rocky distribution of stimulus checks and the states’ inability to process the surge of unemployment claims only reinforces the fact that the United States is far from prepared to handle this recession.

We must continue to ask our elected officials such as our mayors, district representatives and the governor to push for more help from the federal government.

We are in a crisis and if the people in power aren’t helping or acknowledging our needs, we must make them and be loud enough so they can’t ignore us.