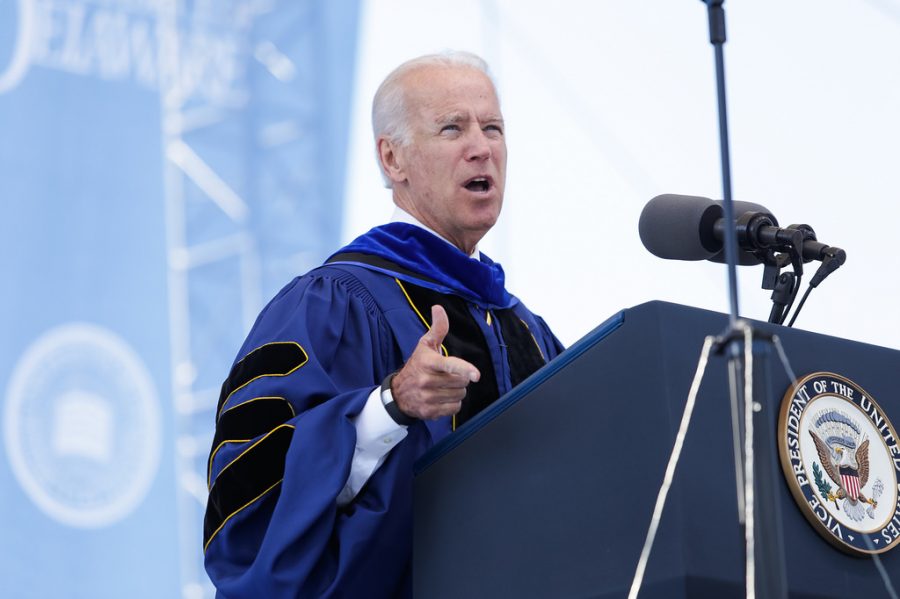 The Review Univ. of Delaware on Flickr.com

Joe Biden is currently running for the 2020 Presidential election. Biden's pick for VP is Senator Kamala Harris. Photo credit: The Review Univ. of Delaware on Flickr.com

The 2020 Presidential Election is less than three weeks away. The Coronavirus continues to play havoc with American lives and Congress seems incapable of providing any relief. With a sham Supreme Court confirmation that may signal the end of the Affordable Care Act, DACA and Roe v. Wade, the stakes couldn’t be any higher.

The Editorial Board of Talon Marks, faced with these contemptible realities, strenuously encourage our readers to vote for Joe Biden and Kamala Harris in this make-or-break election.

This election is hardly between Biden and Trump at all but rather between competing visions for America. Trump represents a return to a mythical (white) past where money rules and minorities know their place. Biden represents a rebuke of this vision and a transition towards an America that seeks justice and progress.

Joe Biden is our one and only option for removing Donald Trump from the most powerful job in the history of the world, the American presidency.

On a few particular issues we feel Biden far surpasses Trump in approaching and solving problems.

Trump’s handling of the COVID-19 pandemic has resulted in the deaths of around 220,000 Americans. That’s more than American combat deaths in WWI, Korea, Vietnam, and the Iraq and Afghanistan wars combined, with an extra WWI to spare. He privately acknowledged the seriousness of the virus while simultaneously downplaying it in public to packed crowds of maskless supporters. He has consistently ridiculed mask wearing, downplayed the virus’ severity, all while contradicting his own health officials in public and private.

Now, after becoming infected along with a dozen other Republican elites at his sham Supreme Court super-spreader party, he claims to be doing his darndest to fight the pandemic… without any drastic measures. Drugged up out on the campaign trail again, Trump wants to convince Americans that he is feeling better than ever. Is anyone buying this?

In a time when working-class Americans and small businesses are coming apart at the seams under the weight of a global health crisis, we need someone who accepts the seriousness of the issue without the bluster, flip-flops, and misinformation. Joe Biden knows that we cannot fight a virus with wishful thinking and machismo. We need a national mask mandate, free fully available testing and economic aid for regular people, not just corporations that are already profiting off this crisis.

Biden is right to say “It is wrong to talk about ‘choosing’ between our public health and our economy. That’s a false choice. If we don’t beat the virus, we will never get back to full economic strength.” Without effective public health policy, the economy and “life as usual” will never return.

Trump’s failure to address this pandemic from the start has sabotaged any possibility of a smooth reopening. We need scientists to take the lead on this, not the stock market and the political party of science denialism.

Since his inauguration, President Donald Trump has demonstrated a total disregard of proven climate science while ignoring and ridiculing calls for environmental preservation. He began by appointing former Republican senator and telecommunications lobbyist, Scott Pruitt to Administrator of the Environmental Protections Agency.

After allegations and investigations into Pruitt’s misuse of federal resources, he was succeeded by *checks notes* coal-industry lobbyist Andrew Wheeler. You may remember him for doing Trump’s bidding in dismantling dozens of Obama era environmental regulations, such as pollution controls on streams and wetlands. As a matter of fact, the Trump administration filled the EPA with bad actors in the fight for sustainability, many with ties to the fossil fuel, chemical and agricultural industries.

Trump’s policy on environmental protection is simply undoing that of the previous administration. He opened up our parks and protected ecosystems to his corporate masters just like we knew he would.

That is another aspect that differs from Vice President Joe Biden’s platform. Biden not only recognizes the threat of global climate change but has a comprehensive plan to combat it.

Biden announced his “clean energy revolution” which will invest $1.7 trillion to make the US a clean energy economy by 2050, at target net-zero emissions. He also pledges to rejoin the Paris Climate Accord as one of his first acts as president.

“Science tells us how we act or fail to act in the next 12 years will determine the livability in our planet,” Joe Biden said. The fact that he lays out a strategy for combating this imminent threat is further proof that he is willing to listen to the experts and prioritize these issues that will affect our planet for generations to come, rather than leave it in the hands of those who blatantly protect their own interests.

Understanding the seriousness of climate change and working to mitigate its effects shows that Joe Biden possesses real concern for the health and happiness of people around the world. Trump’s refusal to grapple with this issue reveals an alarming absence of concern for others beyond himself.

‘Battle for the soul of the nation’

Aside from these two immensely important, life or death issues, Biden has another leg up on Trump: he seems to be a decent, reasonable person who has concern for others’ wellbeing.

Trump, on the other hand, is a narcissistic racist old man whose toxicity has sharply exposed the deep divisions already present in American society. From his intentionally brutal ICE concentration camps to his unwillingness to denounce white supremacy with a full-throated rebuke, Trump is obviously a hateful person who lacks empathy for anyone unlike himself or anyone unwilling to bow at his feet.

While Biden’s performative pick of Kamala Harris may have leftists and police abolitionists shaking their heads, the message it sends isn’t lost on the public. A transition away from the white, male country club politics (of which Joe Biden has certainly been a part) is much needed. Broadening the picture of who is considered “a real American” is a first step we must take towards inclusivity, equality and justice.

As right-wing hate crimes and political violence continue to grow deadlier and more frequent, we cannot endure another four years of the race-baiting, xenophobic hatred that Trump has encouraged to run rampant across this nation.

Talon Marks endorsed Senator Bernie Sanders in the Democratic Primary, citing his Medicare for All plan and support of the Green New Deal. We valued his advocacy for working people and marginalized communities. He won the Democratic primary in California but was ultimately defeated by Vice President Biden. It’s our job to push Biden in our direction.

We stress the importance of voting in your county as soon as possible and encouraging your family and peers to do so as well. However, we recognize that this fight does not end with the results of this election, since voting is still the bare minimum of political action towards our goals. Elected officials must hear the voices of all their constituents and that requires us to stay informed and active on the issues we hold most dear.

Casting a vote for Joe Biden won’t solve the United States’ problems. Racist policing, partisan division and free reign on protected resources won’t disappear with a Biden-Harris administration. Local action and radical social movements must continue to demand a new and better society for all peoples, not just the wealthy few. Our fight continues with a Biden presidency. Justice and equity are a never-ending struggle.

Joe Biden is not a single solution, but he listens to scientists, sees our common humanity and recognizes the problems that we have to address as a nation.