Biden’s win won’t change the world, we will 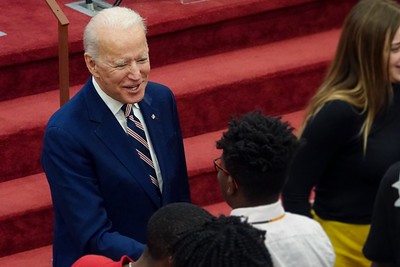 Joe Biden is the newest 2020 elected president of the United States. It was a tight race between Biden and Trump Photo credit: stingrayschuller on Flickr.com

Joe Biden has been voted president-elect, but there is still plenty of work left to be done.

While many are celebrating and applauding Biden’s success, there are others who had to settle for Biden and feel that they are still not represented. This includes people of color, younger voters, and individuals that did not wholly support Biden, but felt that he was the better of two bad options.

While Biden — if he were to follow through on his campaign proposals — would be the “most progressive” president ever, Biden’s longtime career as a politician means he is more than capable of running on empty promises (remember Obama?).

Biden has already peddled the “work with Republicans line” despite a decade of evidence that conservatives are unwilling to cooperate with Democrats on anything other than increasing military budgets.

The Biden-skepticism is clear when you see the “Settle for Biden” campaign, a grassroots effort ran by supporters of Elizabeth Warren and Bernie Sanders.

According to their About Us page, they believe that “He (Biden) will be a president for every American, not just those who voted for him. Joe Biden will be a president who won’t keep us up at night. And right now, that’s the least the American people can possibly ask for.”

The “Settle for Biden” folks may not wholly support Biden and his past actions, but they do believe that he is a better alternative to another four years of President Trump. They insist that removing Trump comes first and having a plan to hold the Biden-Harris administration to their promises, second.

Despite Biden’s presidency being a good first step away from Trumpism, the battle isn’t over.

Biden’s insistence that “nothing will fundamentally change” once he is president, isn’t the clarion call for justice and progress that many were hoping for.

Real change comes at the local level. Voters need to stay engaged locally and continue to push for reform from their local leaders.

It’s important for people to continue pushing and advocating for change. The election showed that every vote truly did matter, with it coming down to the wire in states like Georgia, North Carolina, and Michigan.

These same moneyed interests are already trying to push this legislation on a national level.

Many are voicing their disapproval of the proposition being passed, and are already lobbying for it to be removed. While the process may not be immediate, showing those in office our disapproval of things that infringe upon the labor rights of drivers can make a difference.

For an example of protesting and lobbying making a difference, one only has to look here in Los Angeles County.

The L.A. County Board of Supervisors looked at options early Tuesday morning, to remove Los Angeles County Sheriff Alex Villanueva, who has a history of making decisions in defense of cops and to the detriment of LA County citizens.

This is a result of many citizens voicing their concern, and as the ACLU reported on Twitter, the Board of Supervisors voted 3 to 2 in favor of looking at options to possibly impeach Villanueva.

This is the ACLU’s first step in beginning to take action and hold ALL L.A Sheriff’s deputies accountable. One only has to look at the George Floyd’s murder, among others, earlier this year for proof that there is still work to be done in that field.

This is exactly the type of thing that can be changed if people continue to push rather than sitting back and calling it quits.

Get involved through social media, and allow your voice to be heard. Attend local meetings and hold officials accountable for their actions and decisions.

The country is divided, and the Biden-Harris administration will be taking office at one of the most tumultuous times in our history. Racial tensions are at an all-time high, a pandemic is sweeping our nation and the economy continues to teeter on the rocks.

President Trump’s time in office was damaging to the American people (physically, psychologically, emotionally, etc.). Yet, this period of four years has allowed people to get involved in movements that they feel properly represent by, opposed to a system where they are not represented and valued.

President-Elect Biden promises to be a president for not just the Democratic or Republican party, but Americans everywhere, regardless of political affiliation. This includes those who feel that they are not represented by either party.

Biden’s position as president-elect will only be the first step in ensuring a brighter future. We should celebrate the end of President Trump’s time in office, but we should also continue to hold President-Elect Biden to the promises that his administration has assured.

Everyone is exhausted — 2020 won’t seem to give us a break. 2021 is not guaranteed to be any better. But we must take this monumental chance by the horns and run with it. There is no better time to push further and harder than ever for the world we want to see.

We should not forget that there is still work to be done.