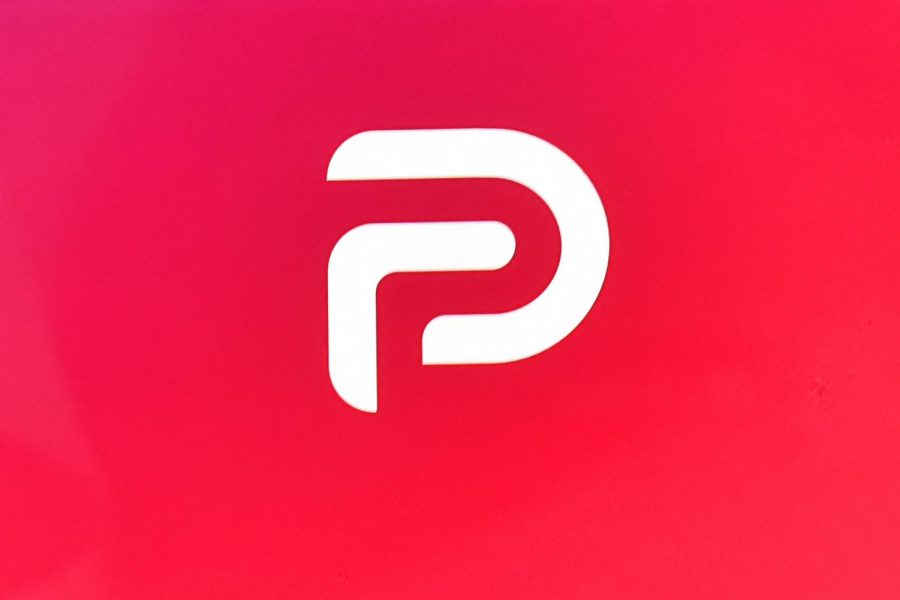 Shown here is the Parler logo. A District Court judge in Seattle ruled that Amazon’s cloud-computing division was within its rights to boot Parler from its servers. Judge Barbara Rothstein opined that forcing Amazon to get Parler back online goes against the public interest, given “the kind of abusive, violent content at issue in this case, particularly in light of the recent riots at the U.S. Capitol.” Photo credit: Anthony Behar/Sipa USA/TNS

Joseph R. Biden Jr. was officially sworn in around 12 p.m. on January 20 as the 46th President of the United States, relieving many Americans and the rest of the world. While the country gains a new president (an actual president), the country’s political climate remains the same.

The deep division of the “United” States may have existed for decades but the continued growth of social media has highlighted these rifts and given voice to our best and most dangerous demons.

For us to move forward from this nightmare, we’ll need to take bold action as a country and hold social media companies accountable and discuss harsh realities of the intersection of power, money and free speech.

For almost five years, the Trump era consisted of blatant social media attacks coming from him and his base, with the “Resistance” side more than happy to fight back.

The constant arguing back and forth from the Trumpies and Anti-Trumpies started in 2015 and has only escalated.

Trumpies on social media praised their cult leader while yelling “Go back to where you came from” to minorities and using ableist wordplay to describe liberals as “libtards” or “libsharts.”

Trump’s words fed into the minds of his cult and the Trumpies used the words to harm people online and in the real world.

Trump’s blatant racism and xenophobia fueled the growth of far-right groups such as the Proud Boys, III Percenters and other white supremacists and Neo-Nazis groups, not to mention the QAnon can of worms.

These groups exploded on Facebook and the tailormade right-wing social media app Parler, along with other Trump supporters and conspiracy theorists spreading hateful messages and disinformation.

While the Trumpies may have expedited the process of division, spurred on by their leader, anti-fascists and anti-racists did not hesitate to hit back.

Trump’s era became Us versus Them.

The November 2020 election was a patriotic celebration for many Americans but only fueled the anger of Trumpists.

Instead of conceding, Trump spread lies about election fraud on social media, ultimately leading to the insurrection on Capitol Hill, provoked by him and planned out by his supporters on these social media platforms.

Different major platforms banned Trump’s accounts to prevent him from inciting more acts of violence, but the damage might have already been done.

But for now, the ban on Trump’s platforms are still in place and President Biden and Vice President Harris sit comfortably in the White House.

We are still a very divided nation. Loyal Trump supporters are quiet, waiting for the call of cult leader Trump (or Q) while the rest of the country tries to move forward but not forget.

For some Trump supporters, the reality of the Trump era being over is finally settling in.

However, if or when Donald Trump returns to social media, it will not matter what the political climate is or the policies President Biden has set in motion. Trump loyalists will listen to him.

Those Americans will be focused on the past and the words from a (hopefully) bygone era.

Americans seem more at ease as a new leader enters office and the Cheeto puff toddler departs from the White House for the last time, leaving behind thousands of people dying at an alarming rate and a divided nation.

As social media progresses, the past follows it, letting the wild and weird tail us until the end of time.

The communication issues highlighted by the disastrous Trump administration won’t disappear with the ban hammer being dropped at the last minute by Twitter and Facebook.

Where were these Silicon Valley monopolists over the last five years? What prevented them from calling out their delusional users (including the president) when QAnon first appeared? Or when Trump spread any number of his thousands of lies online?

These corporations only seemed to jump into action when it became clear that Biden would gain the White House, suggesting that profit determines action, not truth or the health of public discourse.

When it was profitable to allow the mass brainwashing of Facebook boomers, Zuckerberg let it happen. Now that the winds have shifted, it suddenly is bad business to allow insane lies to proliferate on his platform.

Twitter Jack is a resistance hero for censoring Trump’s election fraud lies but where was he when Trump was calling for violence against BLM protesters or anti-fascists? Jack called an audible when it was obvious his cash-cow was headed to electoral slaughter.

Despite our distaste for Trump and his evil agenda, the power for billion dollar companies to eliminate a subsection of the populace from a digital public square in a moment’s notice is a tool of control we cannot abide.

Corporations shouldn’t be able to determine what people say or see. While Trump and his cronies may be a threat to our public discourse, who’s to say you won’t be framed in the same light if crypto-fascist Josh Hawley becomes president?

We need a digital bill of rights that protects internet users in the same way our Constitutional Bill of RIghts defends us from government overreach in the real world.

Much of the addicting and misleading nature of social media is rooted in collection, selling and usage of user data by internet companies around the world. Targeted ads and personalized recommendations push users in whatever direction they may be headed, even if it’s down a rabbit hole.

Strong antitrust regulation must be enacted and enforced on the federal level to ensure these corporations cannot continue to profit off the destruction of rational human thinking.

Breaking up these conglomerates like Amazon, Google and Facebook, combined with a digital bill of rights and antitrust enforcement, may be one of the most pressing issues for technology advocates moving forward.

Without a place for people to communicate effectively, society devolves into competing echo chambers racing each other to the extremes. We cannot ignore the troubling state of techno-capitalism and the dangers it poses to a stable, progressive society.