Celebrities need to stop making their own tequila brands 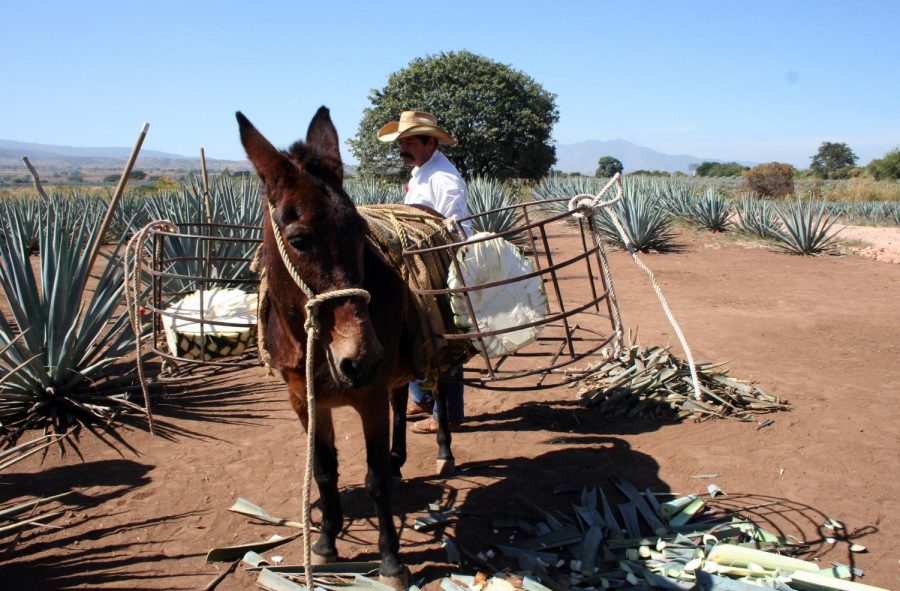 A jimador demonstrates the original, traditional way of bringing the blue agave from the fields: by the "workhorse" donkey and caged baskets. Nowadays, the heart of the plant is brought into the distilleries by the truckload.

Kendall Jenner is the latest celebrity to launch her own tequila brand, called 818, named after the Calabasas, California area code where she and her family reside.

Jenner’s 818 tequila is a white-washed, gentrified tequila produced by an already-rich celebrity hopping on the tequila train, profiting off of the spirit without paying homage to the rich culture of tequila making and its roots.

Right after Kendall Jenner made this announcement, many took to social media to express their disapproval and accused Jenner of appropriating Mexican culture.

Some may counter and say that wine is made around the world, yet no one is shouting “cultural appropriation.”

However, it is important to understand where tequila comes from and how it is made.

Tequila comes from the agave plant that can almost exclusively be produced in the state of Jalisco, Mexico — and nowhere else in the world — so resources are limited.

The agave plant and tequila are also deeply rooted in Mexican culture and have references of their use in food and drinks dating back to ancient Mayans.

“When you come from the outside, with only the intention to make money off of this thing that’s so important — without any regard or any real knowledge or any respect to that culture — it’s cultural appropriation,” said Lucas Assis, an LA-based tequila expert and bartender.

If you are an outsider making tequila, the least you can do is gain understanding and respect for the culture, and the people who work hard to make the product.

The 25-year-old couldn’t even get basic Spanish grammar correct, and incorrectly labeled her tequila as “blanco tequila” instead of “tequila blanco”, and let’s not get started on the improper way she tasted the tequila, which she sipped on the rocks (a big “no” amongst tequila experts.)

Jenner is not the only celebrity to create her own tequila brand — other celebrities have launched their brands prior to this one.

In March of 2020, Dwayne ‘the Rock Johnson’ dipped into the celebrity tequila craze by introducing Teremana.

This amount will surpass the amount of sales of George Clooney’s brand Casamigos. Casamigos is another high end 100% blue weber agave tequila that he later sold for one billion dollars, after which Clooney launched Casamigos mezcal in 2018.

Prospero, a female founded brand was launched in 2019 by celebrity Rita Ora. The Prospero brand is made by master distiller Stella Anguiano. Anguiano has been crafting Tequila in Jalisco for 30 years.

This brand was not met with much backlash like the new 818 brand, perhaps because of the partnership between Ora and Anguiano. Anguiano is actually a native of the area where the tequila is made. She is one of the people and not an American outsider like Jenner, Clooney and the Johnson.

No doubt these are popular brands of tequila because of the celebrity name that is attached to each of them. According to an Instyle, there was a 65% boom in celebrity tequila in 2020 and that was mainly because of the pandemic.

Another growing concern is that an agave shortage is being reported. Instyle indicated that there is no real way to determine if the celebrity tequila boom has had an effect on this fact.

But this has only caused more issues for tequila makers themselves, in terms of demand which has an effect on quality. This also has a direct effect on the smaller distillers who cannot compete with the rise in cost for agave.

Some people have asked why these other celebrities with their own Tequila brands weren’t criticized or accused of cultural appropriation after launching their own brands years ago.

It may seem unfair to only single out Jenner since she isn’t the only non-Mexican celebrity profiting off the Mexican spirit.

However, her recent business endeavor also fits a pattern of problematic behavior within the Kardashian-Jenner clan, including several other accusations of cultural appropriation and insensitivity toward racial issues.

Perhaps one of the most infamous instances was the now-pulled Pepsi commercial showing a street scene with a crowd of protestors holding vague signs like “Join the conversation.”

In the climatic scene, Jenner seems to “diffuse the tension” by giving a can of Pepsi to a police officer, at the approval and cheering from the protestors.

Elle Hearns, the executive director of the Marsha P. Johnson Institute and formerly an organizer for Black Lives Matter, said the ad “plays down the sacrifices people have historically taken in utilizing protests.”

Another example is Kim Kardashian — Jenner’s older sibling — filing to trademark the word “Kimono” for her shapewear collection. She then removed the name from her collection after receiving criticism for trying to claim the word for the traditional Japanese dress.

Many different tequila brands out there don’t have the opportunity and perks that come with a famous name that helps them sell their product. When someone like Jenner with an already famous background comes into the industry, it’s just a bit insulting for these other family-owned businesses.

People should skip on the 25-year-old’s tequila brand and instead buy from all of the other authentic and great-tasting tequila brands that have the knowledge behind tequila making and years of hard work behind their craft.

There are many brands that are family-owned, delicious and have been working at production of their tequila and mezcal for years.

These companies need business to succeed and keep their enterprise afloat.

Family-owned Arette tequila is made in the historical distillery called “El Llano” which is located in the heart of tequila making, by the Orendain family which have deep roots in the Valley of Tequila. The brothers Eduardo and Jaime Orendain are fourth generation owners and distillers, who operate Tequila Arette, and produce a great spirit at an approachable price.

Aside from Jenner’s tequila, there are so many other tequila’s who deserve to have people’s business because of quality & taste — not just fame.