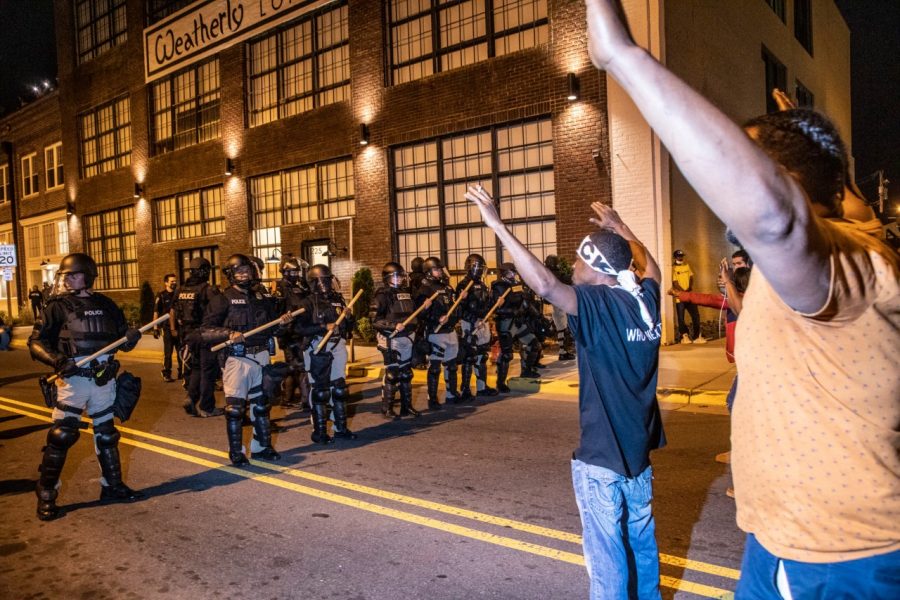 A demonstrator protesting the police killing of Andrew Brown Jr. raise their hands in front of a police line Tuesday, April 27, 2021, in downtown Elizabeth City. At least six protesters were arrested when police in riot gear marched toward roughly a dozen protesters two hours past curfew. Protesters were peaceful but refused to clear the streets.

The party of “free speech” and “small government” are using their governmental power to suppress protests with threats of state and vigilante violence, jail time and exclusion from government jobs and assistance.

So much for the tolerant far-right!

In what seems as a counterintuitive move, many Republican lawmakers across the country are attacking the first amendment with new anti-protest state laws.

Amongst the multiple bills, Oklahoma passed a law which grants both criminal and civil immunity for drivers who hit protesters with their cars while “fleeing” a dangerous protest.

Under the new law, protestors would also be given new penalties for those who obstruct streets or traffic, including large fines of up to $5,000 and up to one year jail time.

Protestors being hit by cars happens more than one would expect.

According to Ari Weil, the deputy research director for the Chicago Project on Security and Threats, there were at least 72 incidents of cars driving into protesters in 2020, from May 27 through July 7.

During the nationwide BLM protests last summer, the police often used brutal and excessive force against protestors and there were even cases of police using their cars as weapons to hit protestors.

In Detroit, an officer drove his police SUV through a crowd, sending protesters flying and two New York police officers did likewise at a Black Lives Matter protest in May 2020.

These new laws could potentially give more room for police misconduct and violence like what we’ve seen before.

With the history of people getting injured and even killed by vehicles white protesting, it would seem that new laws would be created to protect those exercising their first amendment right, not make them more vulnerable.

Besides the physical threat this poses to protestors, the penalties are extremely harsh and can potentially ruin the lives of those convicted, in other ways.

Those convicted of a felony get their voting rights taken away and serious difficulty finding employment.

In Minnesota, the GOP wants to make those convicted of protest-related charges ineligible for government programs, including housing assistance, food stamps and student loans.

With many lower class citizens and minorities relying on these types of government programs, it is very clear who Republicans are attacking with these outrageous new laws.

The Republican Party is attacking a form of protest that shaped the history of our country, from the civil rights marches of the 1960s to workers’ rights marches, and help improve the lives of the disenfranchised.

Perhaps it’s worth mentioning the Boston Massacre (which was the result of colonists rioting) radicalizing proto-Americans against the British, or the Boston Tea Party, where $1.7 million in property destruction was used to make a political point.

Do these Republican “patriots” not understand the revolutionary history they so vapidly celebrate?

It is concerning to see Republican lawmakers and the far-right justifying violence against American citizens who are exercising their rights, simply because they disagree with their message.

Ironically, the January 6 insurrection attempt at the Capitol Building is the justification many legislatures are using to push through these protest restrictions.

The same party that wound up the racist, conspiracy theory top and let it rip in January are now capitalizing on the terror they sowed.

Despite overt attempts by many leading lights of the GOP to use a violent “protest” for their political aims, Republicans now have a boogey man of their own creation to justify penalizing protests they actually oppose: anti-racist, anti-fascist and anti-police street actions.

Not all of the proposed or enacted bills were “inspired” by the fascistic storming of the capital, as many were on the books before the event took place.

This just shows the GOP plan to stifle their political enemies was already in the works and only boosted by this convenient excuse.

The reactionary assault on democracy has been well under way well before the attack on the capital. Republicans, who often label themselves as “free speech defenders,” have been mounting a decade-long campaign to criminalize protests.

Even if many of these laws fail to pass their legislatures, the attempts to pass them only show that the Republican party is more than willing to use the big government they supposedly oppose to suppress people utilizing their first amendment to resist that same big government.

As they say, if at first you fail to suppress the people’s voice, try try again! These bills could return in more subtle or liberal-friendly ways, sneaking under the radar and dodging the media cycle.

Perhaps we shouldn’t be surprised that a party of rabid racists and conspiracy theorists that unquestioningly support the hyper-militarized racist system of policing are using their powers to target the largest anti-police and anti-racist protest movement this country has ever seen.

The deeply anti-democratic roots of the Republican Party are in full bloom and we all should be worried. When state violence against protesters is so brazenly condoned by those threatened by systemic change, the results can be catastrophic.

Ruining people’s lives with wild restrictions on bail, job opportunities, government aid and extreme fines and jail time is just the tip of the iceberg.

People could very easily lose their lives to a militarized police force with even greater leeway to deal out violence to vulnerable crowds with little recourse or response.

Police forces across the country are deeply political, with a clear favoring of the GOP amongst their ranks and a clear opposition to anti-racist and anti-fascist causes.

When these ultra-conservative, roided up shock-troopers of reaction are let off the leash by these new open ended laws, expect them to make full use.

We cannot sit by and let the forces of capital and racist reaction to slice away at our fundamental rights as humans to protest and make our grievances clear to those in power.

There are no easy answers as to how to fix this. Much of the damage has already been done.

We are a deeply stratified populace with seemingly irreconcilable views on where to take the country.

While a Democratic sweep of state legislatures could reverse some of the damage, voting isn’t enough to counter the root-causes of this anti-protest push.

This is especially true considering the anti-voting bills the GOP is often pairing with protest suppression.

Supporting grassroots legal funds, bail funds and opposition to these bills in the courts may put a band aid on these problems for the time being.

But most importantly, support anti-racist protesters full throatedly and unapologetically.

Question the use of the term “riot” by news outlets, the police and government officials.

Resist attempts by centrists to drive wedges between “good” and “bad” protesters.

Solidarity is the most important tool any social movement can possess and we need it now more than ever in the wake of our country’s disturbingly anti-democratic trend.