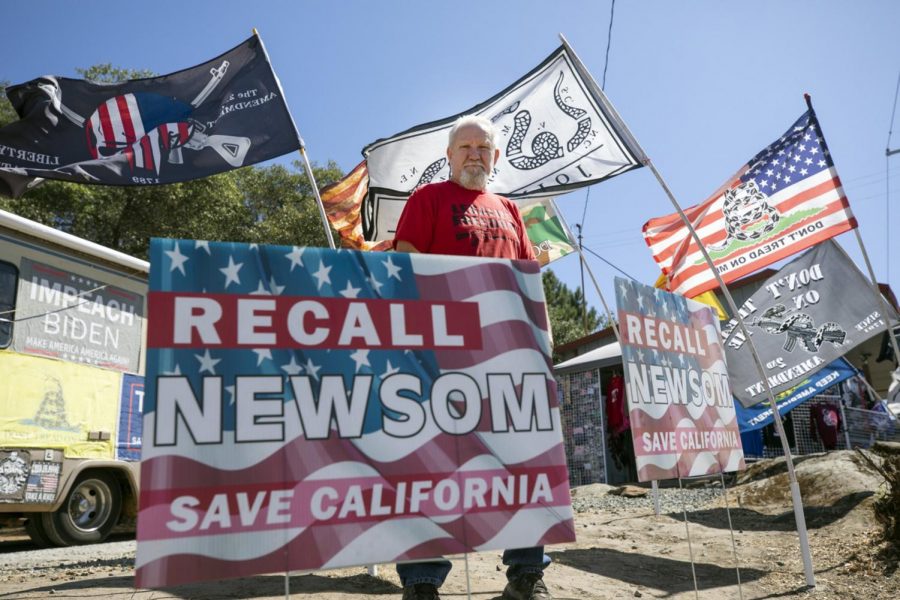 Ed Brown, who works at a flag store in Sutter Creek, says he was bothered by Gov. Gavin Newsom's hypocrisy of visiting the French Laundry restaurant during the pandemic while many businesses closed, and is what pushed him to recall the governor. Amador County, per capita, had the most signatures on petitions to recall Gov. Gavin Newsom. Photo credit: Myung J. Chun/Los Angeles Times/TNS

Governor Gavin Newsom is facing a recall election against 46 other candidates on Sept. 14 because of how voters view his performance and handling of the COVID-19 pandemic.

Newsom has a history of willingness to mislead and deceive residents of California.

Newsom’s administration has touted that the state has a 75.7 billion dollar budget surplus, but in all reality, 37.7 billion of that supposed surplus is from federal funding earmarked to be spent on education.

Additionally, 12 billion dollars in state reserves withdrawals and borrowing are being used to increase spending.

Newsom went on record saying that his administration had achieved fire prevention work on roughly 90,000 acres of land.

According to an investigation by CapRadio and NPR, Gavin Newsom and his administration only did prevention work on around 11,400 acres of land. The difference in work done is a gigantic 690%.

During that same time in 2020, California had a dangerous wildfire season and Newsome slashed the wildfire fighting budget by $150 million.

California has a homelessness problem. From the streets of Los Angeles to Newsom’s old stomping grounds of San Francisco, Newsome is planning to spend $12 billion to house homeless in hotels.

Newsom, during the recall election, missed a deadline to be able to include the words, democratic party, next to his name on the recall ballot.

He missed a deadline to request this and ended up suing his own administration and elections chief. The missing of this deadline means that Gavin Newsom would show up with a party designation on the ballet.

Newsom responded to this deadline by saying that he deserves “equal” protections like every other candidate that is running.

Under rules that his administration added, his recall campaign is allowed to raise unlimited funds, while all of the competing campaigns are limited to $32,400 in donations.

Newsom and his cronies, including the President and Vice-President of the United States and multiple U.S. Senators have continued to call the recall election, the “Republican recall.”

This recall election is not just a Republican recall. According to the Recall Gavin Newsom 2020 Campaign, over 300,000 democrats sign the petition to recall Newsom. In addition, the petitions were signed by democrats, republicans, and independent voters.

Kevin Paffrath is a democrat running for Gavin Newsom’s office and is second in an average in polls by RealClearPolitics.

So much for a so-called Republican recall.

Gavin Newsom instituted a lockdown of California in an attempt to stop the spread of COVID-19. He also required masks in all public and private places.

With all of those policies, he took a “do as I say, not as I do” stance to his own lockdowns.

Newsom attended a dinner in which all attendees were maskless and not social distancing, even though Newsom had mandated policies in place.

The dinner was at the French Laundry and took place with lobbyists from the medical sector.

He also shut down businesses and wineries but was above his own closures as his winery stayed open.

Newsom shut down public schools and made children go to virtual learning, all the while, his own children went to an open private school that was using remote learning and hybrid classes.

Larry A. Elder is the best choice to bring California back from the lies and deceit of Governor Gavin Newsom. Elder will focus on bringing equity back to education, lowering taxes, and fixing our drought issues with all options being on the table.

Elder is the best choice to defeat Gavin Newsom and on the 14th, you need to go to the ballot box or return your mail-in ballot and vote Larry Elder.

A vote for Elder is a vote for making California great again.