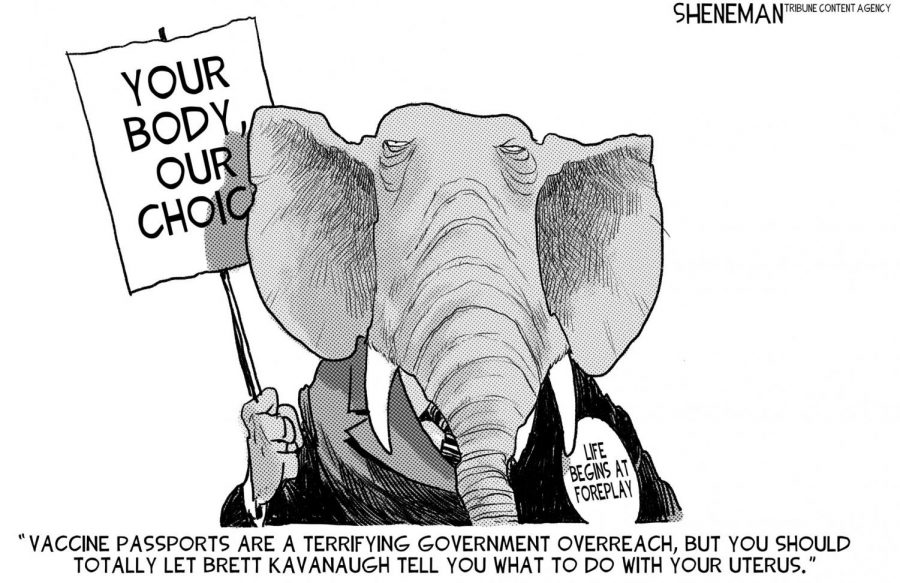 Once again men are deciding what women should do with their bodies, if you don’t have a uterus mind your business.

With the new Texas abortion law sign by Greg Abbott, which bans abortions past six weeks, women’s reproductive rights are in jeopardy again. The law came into effect on Sept. 1 and concluded that an abortion can not take place once a heartbeat is detectable in a fetus.

Most women don’t even have pregnancy symptoms until they are five or six weeks pregnant or confuse them with period symptoms since they are extremely similar and find out later than that. By then it is already too late to have an abortion in Texas.

Abortion has always been a hot topic and once again it seems we take one step forward and many steps back.

The United States’ ruling of Roe v. Wade states that in the first trimester of pregnancy the state may not regulate the abortion decision, the second trimester, the state may impose regulations on abortion that are reasonably related to maternal health and in the third trimester, once the fetus reaches the point of “viability,” a state may regulate abortions or prohibit them entirely.

The Roe v. Wade case was also because of abortion laws in Texas in 1973, you would think they learned their lesson the first time, but instead, they found a loophole.

They are using civil lawsuits to go after women who want or have abortions. The reasoning behinds this being okay, the Pro-life movement, but are they really Pro-life or Pro-birth?

Pro-lifers believe that abortion is morally and religiously wrong, and support the prohibition or restrictions of abortion.

There are people that are pro-life for themselves but believe that women should have the right to choose what is right for them. However, they also believe that there should be restrictions on when you can get an abortion.

The poll also shows that 72 percent of Americans want some sort of restriction on abortion, but not to outright ban it.

The main problem is that all pro-lifers are framed as people that do not want to give women the choice at all but those are Pro-birthers.

Someone who is pro-birth only cares about the fetus until it is born and becomes a baby. They claim to care about the children and want to protect them while inside their mother but once they are out into the world forget about them.

They believe a woman should give birth even if the baby is stillborn or will have life-threatening birth defects, even if the mother is at risk of death continuing the pregnancy. This is dangerous for women who may not be able to carry a child to term.

They claim to be pro-life but only want to regulate what a woman is allowed to do with her uterus.

They will argue for a fetus’ rights but ignore the children in foster care and the children in poverty going hungry in the country claiming it’s not their fault they aren’t their parents and can’t help them And look down on the government using taxpayer money to them.

If you are really pro-life you would care about the children who are breathing, living and eating on their own without draining and depending on their mother’s body for its survival like a parasite depends on its host.

Women don’t make the decision to have an abortion lightly, although it is not childbirth there is still trauma the body goes through and mental trauma as well.

The United States needs to take notes from other countries, take Mexico for example.

Mexico is a conservative catholic country where it has been ruled unconstitutional to criminalize abortion. The reasoning for the law being passed on can be attributed to the amount of tragedy taking place all over the country. Women were inducing miscarriages and having clandestine abortions resulting in death.

Abortion laws have nothing to do with religion. Mexico is proof of that, about 80% of the population in Mexico identifies as Catholic.

Women and anyone who assisted them in an abortion according to the Texas Law could risk facing charges and serve time in jail. Disheartening to victims of sexual assault and minors.

It would be lacking in compassion for a victim of sexual assault to keep an unwanted pregnancy. A child should not have to carry that fetus to term either, it is dangerous.

The youngest reported birth in the United States was done by a 5-year-old. She required a cesarean section because her pelvis was too small.

The complications that come with a teen pregnancy are plenty. A child could be born with low weight, and the mother can undergo complications while pregnant and while giving birth. There are also a number of health problems associated with perinatal outcomes and an increased risk for perinatal death. A teen mom is likely to develop anemia, low blood pressure, and have a premature birth.

Abortions are done to protect women. Protecting the life of an unborn human should not be prioritized over the person carrying them to term. It is also a woman’s choice whether or not she would like to have an abortion, it is a right that should not be taken from her.

The argument of whether an abortion should be legal is not about pro-life or pro-choice, it is an important decision where the government should not have total control in what a woman’s reproductive rights are.

The government’s responsibility is to provide aid, protection, and support to its citizens not persecute them for seeking healthcare.