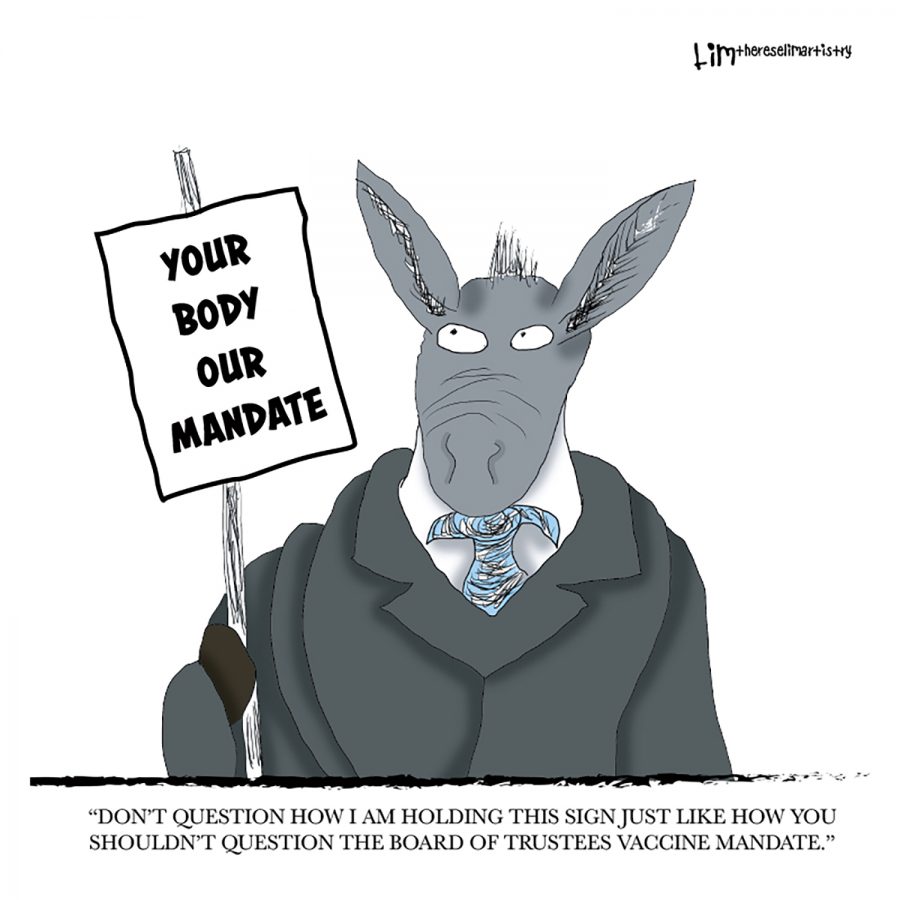 Vaccination mandates should not be forced upon students or faculty in order to attend or teach classes on campus.

Receiving a vaccine should be the personal choice of our students and faculty and not dictated by the government.

The government says this mandate is an attempt to keep everyone safe from spreading this virus, however, vaccinated or not you’re still at risk of getting and spreading the virus.

Cerritos College will be rolling out a soft mandate starting Oct. 1, for vaccination/testing requirements per the board policy, in the coming weeks.

The Board of Trustees’ will be voting on Oct. 6th on whether or not to have a vaccine only mandate starting January 2022.

With the mandate students and faculty will be required to submit proof of vaccination January 2022 to return to campus.

Students and faculty at Cerritos will have 30 calendar days, starting January 1, to fulfill this requirement or disciplinary actions will take place.

Failure to comply for faculty members will lead to unpaid leave and further discipline for cause as set forth in education code section 81732.

Failure for students to comply with these requirements will result in students not being allowed to attend on campus classes.

This rollout method has led to some faculty members threatening lawsuits over the presumed termination of tenured faculty that are unvaccinated.

In this day and age, many people tend to be hard headed. People have different opinions about politics and life in general. Everyone has a different background story which is why it’s impossible to have only one solution; in specific mandating vaccines, even against their will.

With that being said, the enrollment of schools are dropping in Los Angeles significantly. According to the Orange County Register, nearly 150,000 students in Los Angeles did not return back for the 2020-2021 school year.

Sadly, the number of kids not enrolling in schools are still expected to go up. Mandating vaccines will not help students or parents deciding to enroll, if they feel pressured by the school.

Approximately 50,000 people die a year to the flu and pneumonia, according to the CDC.

There is a flu vaccine, but it is not mandatory. People in support of a vaccine mandate say that it is about saving lives, but if that was the case, wouldn’t we mandate the flu vaccine as well.

If this was about saving lives, wouldn’t we mandate the leading cause of death, heart disease.

Healthcare has and always should be a discussion between your doctor, you and your family. The government should never be able to dictate how you take care of yourself.

Politicians, including our current Vice President Kamala Harris, news anchors, and celebrities said they would not take a vaccine developed under President Donald Trump.

Understandably, those in support of the mandate will say that because it involves the public safety of others, that they should continue with mandate, but why can celebrities and politicians get away with not following the same rules?

Governor Gavin Newsom, was seen inside the French Laundry restaurant mask less and without social distancing during the first lockdown. He was hanging out with lobbyists and ignoring his own COVID-19 protection measures.

On Sept. 18, the yearly Emmy award ceremony was held and the event was held “outdoors” in a tent that as Seth Rogen put it was “hermetically sealed”.

Rogen told The Hill that if he was told exactly how they would be holding the ceremony that he would never had come. It did not matter to him that everyone had been vaccinated or a negative test, he did not like being in that small area full of other celebrities in a venue that was just like being inside.

The government made it so that the movie and television industries were exempt from the rules that they say we should now follow.

The ways in which we keep ourselves healthy and safe is by following the COVID-19 guidelines already put in place by the school. It should not be something that is forced upon us.

A negative PCR test should be just enough in order for us to attend classes on campus.

If unvaccinated students and faculty take the proper precautions in order to keep themselves safe like wearing masks and social distancing, why must the mandate still be forced upon us?

Despite the CDC guidelines, they have contradicted themselves about COVID-19 and the vaccines.

Articles claim that people who receive the vaccination are less likely to die from COVID-19, as well as spread the virus and that symptoms are less severe.

However, this is dependent upon the person and how their body reacts to the virus.

“Researchers estimated that the Pfizer shot was just 39 percent effective against preventing infection in the country in late June and early July, compared with 95 percent from January to early April” according to the New York Times.

In the report it also mentions, “the new estimates are raising concerns both in Israel and elsewhere, including the United States”. So why mandate a vaccine when the effectiveness is dropping and not helping the variants.

This vaccine does not seem right in a world that we are supposed to have so much freedom in. Is this America anymore, or are we just marching to a socialist state that mandates what its’ citizenry can or cannot do?

Students and faculty members, if you believe that this is still America and you’re against this mandate, contact the Board of Trustees’ and let your voice be heard.