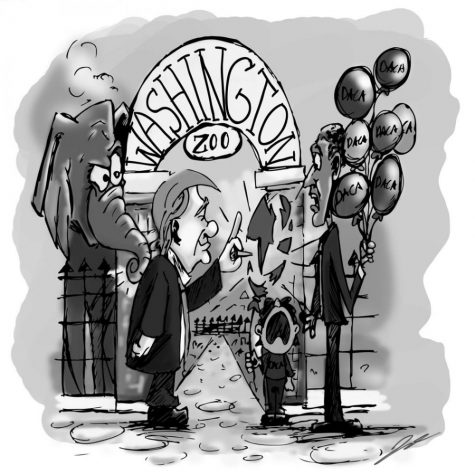 The memorandum, simply put, threatens the Trump administration to either “phase out” Obama’s unconstitutional Deferred Action for Childhood Arrivals by Tuesday, Sept. 5, 2017 or face a lawsuit.

On the said due date, Trump took to Twitter not only announcing the end of DACA but giving Congress six months to come up with a legal immigration law for the DREAMers.

To help the DREAMers with legalizing their immigration status we must find out who are their representatives and contact them, voicing your support for the DREAMers.

The masses along with figure heads quickly turned to social media criticizing Trump’s decision to repeal the program.

Bernie Sander’s tweeted describing the decision as “the ugliest and most cruel decision ever made by a president of the United States in the modern history of this country.”

Obama’s care for the DREAMers clearly didn’t go far enough to make Congress do something about DACA in terms of legalizing it.

DACA, from it’s inception, was a fragile balloon of hope for the DREAMers because it wasn’t founded properly.

With a Republican president in office and the majority of seats in both the House and Senate being republican, DACA did not stand a chance.

Paxton –indicted for security fraud by a Texas grand jury in 2015 and scheduled for a court date in December 2017 – hasn’t really been called cruel for stirring up the repeal in the first place, let alone the other 10 attorney generals.

Trump’s decision, though it may seem like it adds to his long list of hatred-based actions towards Latino people and immigrants (undocumented or otherwise), has also called Congress to do something about the immigration law.

A call-to-action has been proposed by the masses to contact their representatives and voice their opinions, but we’ve recently seen how well Congress works when passing bills.

The best thing to do for the DREAMers is to try and fully understand how this limbo-state that DACA is in affects them.

The two most important things to know is that current active DACA recipients will not have their permits removed and current expired recipients who have submitted renewal applications are being accepted and reviewed without Trump’s repeal affecting the acceptance or rejection of the application.

Those whose permits expire by March 5 must submit their renewal application before Thursday, Oct. 5 to be reviewed.

New application submissions, as of Sept. 5, are being ultimately rejected.

If Congress fails to pass an immigration law within Trump’s generous six-month delay, deportation is a the next step for those who are not protected by DACA.

FWD.US, an advocacy group for immigration laws, has a letter calling for Trump and Congress to not end DACA and to pass the DREAM Act or else the economy will “lose $460.3 billion from the nation GDP and $24.6 billion in Social Security and Medicare tax contributions.”

More than 400 corporate giant CEO’s, such as Apple and Google, have signed the letter which states, “DREAMers are vital to the future of our companies and our economies.”

It’s evident that the 800,000 recipients of DACA, for all intent and purpose, are American.

No one lives up to the American idea that anyone can be anything they want through hard-work and passion like those that make up the DACA community.

No one actually takes advantage of the opportunity that Uncle Sam has told us from the very beginning that whatever you’re born into doesn’t determine your future the way the 800,000 DREAMers do.

Obama was wrong to leave the DACA order unprotected.

Trump was wrong to allow himself to be grabbed by the pussy by Ken Paxton and the other 11 Attorney Generals to repeal the program that helped 800,000 human beings.

And the masses are wrong to contact Trump for DACA protection.

Obama failed to protect the DACA program because it was Congress who was supposed to help out the Americans people.