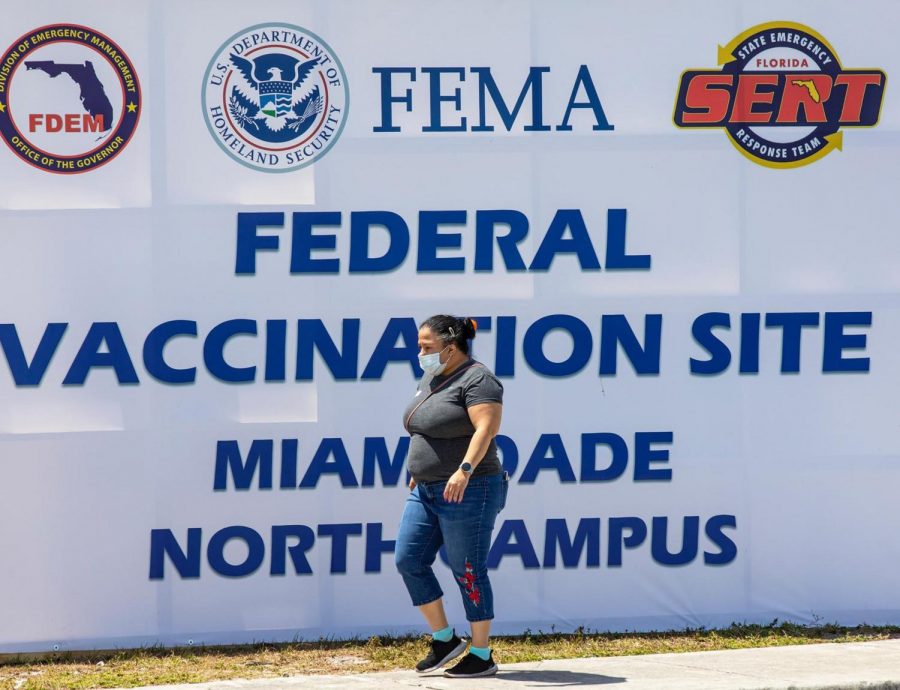 A vaccinated person leaves the FEMA operated vaccination site at Miami Dade College - North Campus in Miami on Monday, April 5, 2021. Florida is now seeing a record number of deaths as the delta variant continues to surge through much of the U.S. Photo credit: Daniel A. Varela/Miami Herald/TNS

California Community Colleges need to mandate the COVID-19 vaccine for all students and faculty in order to protect everyone on campus and the community.

Major universities are setting the example by mandating the vaccine for students and staff, community colleges should follow thier example.

The Food and Drug Administration approved the first COVID-19 vaccine, Pfizer, but before this milestone achievement was announced, all UC’s and Cal State Universities took their own initiative by requiring proof of vaccination.

Implications for policy are needed as the Delta variants emerge- vaccination is the best protection against severe hospitalization and death.

According to a study by Yale Medicine, the delta variant is spreading 50% more than the alpha variant- which was already 50% more contagious than the original SARS-CoV-2.

Yale Medicine also mentions how unvaccinated people are the most at risk and that it’s causing the virus to spread.

The California State University system joined the University of California system in implementing a mandate for vaccinations unless medically exempt or showing proof of a negative weekly test.

Although vaccines don’t guarantee 100% protection against the virus, it’s the wisest thing to do for the safety of yourself and others.

Vaccines are not a new concept in terms of great medical advancements. Efficacies in protecting students against contagious disease have been implemented by public schools requiring them.

In a polling sample by Morning Consult, a data collecting firm on COVID-19 vaccination, unvaccinated adults gave positive feedback over an FDA approved vaccine that would give them confidence in the safety and effectiveness of receiving a first dose.

The FDA requires a high level of extensive research and support that is considered a high standard amongst scientist and doctors across the world, clinical trails were shared in cooperation to help the global effort in creating a safe vaccine quickly without fear of the unknown.

Misinformation, distrust, and pseudoscience claims on what’s inside vaccine should be canceled and anyone attending our California Community colleges should reflect a standard in which academia is prized- factual evidence, critical thinking, and overall upholding of the values of the scientific community.

Sometimes the correct leadership decision to enforce is not necessarily the most obvious answer, especially when political opposition and state sovereignty contradict people’s desires.

However, it is up to us as individuals to localize our concerns and direct our problems with our leaders that reflect similar values, in this case our board of trustees, health administration officials and local government leaders at city hall.

In our stance, all 116 California Community Colleges should follow precedent from other academic institutions and become a part of the solution by mandating college students now to set an example of every attempt made to prevent the disease from spreading any further for historical context.

It would be an embarrassment, and very dangerous, if we were the last institution to ignore the evidence and go against the best interests of our faculty and students.