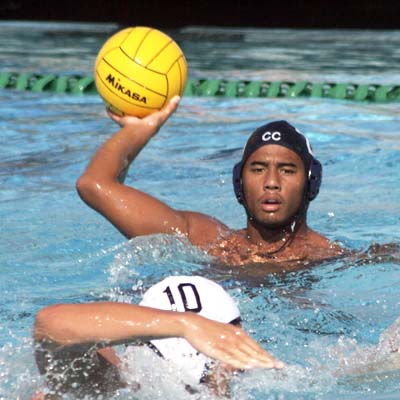 The Falcons offense started early and it was consistant. Cerritos finished the first quarter with a 4-1 lead.

It didn’t let up on on either end of the pool, defeating Merced 13-6.

Cerritos was led by Cory Baccus, who scored five goals and scored in every quarter.

Baccus wasn’t the only key to the Falcons’ victory, the goalkeepers Justin Calderon and Andrew Castro came up big defensively combining for nine saves and a couple of steals.

Pat Muniz made Castro and Calderon’s lives much easier. Muniz was everywhere, his great defense led to five steals for himself.

Baccus recorded three assists to go along with his five goals.

At halftime, the Falcons led, 6-2, but the Cerritos team didn’t show any signs of slowing down.

The Falcons bench came in and made key contributions, and collectively outscored Merced, 7-4, in the second half giving the Falcons a 13-6 victory.

Cerritos improved to 5-4 heading into the Citrus Tournament.