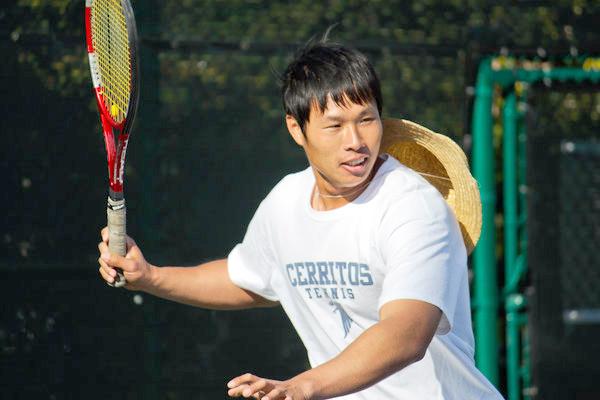 Born in Guangzhou, China, Quin Chai, also known as Jony, and his parents moved to the United States when he was two years old.

At the age of 10, his father told him that he needed to play a sport and he chose tennis.

“I’ve also tried soccer and basketball. If I knew I’d be this tall (6’3), I’d probably wouldn’t play tennis, but tennis is pretty fun,” he said.

“Everyone has his own sport. Some people like basketball more. I guess tennis was my sport.”

Qun Chai attended Cerritos High School and helped the team win four league championships and he was named Athlete of the Year as a senior.

Teammate J.P. Elchico says he met him when he was a high school player in Cerritos.

“I officially met him at a preseason meeting with recruits for this year’s team, but I did hear about him in high school since he was a widely talked-about player in the Cerritos area,” he said.

“He is very intelligent around a tennis court; he knows exactly what he needs to do to win, and he has incredible reflexes when he comes into the net, which is his best physical asset.

“He’s a strategic mastermind and possesses all the strokes and variety in order to be a very effective player.”

At the age of 17, Qun Chai was able to take his skills to Brazil in an international tournament.

“My [high school coach] was Brazilian, so he had some hook-ups.

He asked ,‘Do you want to play in this tournament?’ and I said, ‘Yeah, sounds good,'” he said.

Qun Chai won the tournament and did not let his final opponent win one game in the match.

“It was a good experience; Brazil was beautiful,” he said.

After graduating high school in 2005,   Qun Chai attended UC Riverside and earned a bachelor’s degree in business administration. He played No. 1 and No. 2 doubles and No. 6 singles and says that he earned a 50 percent winning percentage while playing for UCR.

After earning his degree, he had a change of heart in his major.

“Business is okay, but my passion changed and I wanted to be a doctor. I feel like I could help people more with a medical degree than a business degree. So that’s why I’m [at Cerritos], to get the prerequisites for medical school,” he said.

Once he transferred, he contacted head coach Alvin Kim about joining the tennis team.

Kim said, “I actually tried to recruit Qun Chai right out of high school, but he was set on going to UCR. He had been one of the top recruits back then and still is now.”

“Yes, he beat me the first time we played, but to my defense, I had just played football the day before and was pretty beat up,” Kim said.

Sophomore Derek Siddiqui said, “He is like a leader toward everyone. He helps everyone with his tennis games, and when he is around, we all seem to perform at a higher level.”

Kim talked about Qun Chai’s development as a player.

“He’s much more of an attacker now. In high school, he was a huge basher from the baseline but he’s developed phenomenal volleys and attacks almost mindlessly.”

Elchico said his favorite memory of Qun Chai was during his win over San Diego Mesa College opponent, Stan Magarchenko.

“He hit a kneeling overhead to seal the match. It was an incredibly difficult shot that he makes look easy,” Elchico said.

Siddiqui said that Qun Chai is an “easygoing guy and fun to be around.”

“He is easy to joke around with and he is not afraid to crack a couple of jokes,” he said.

Qun Chai said that he tries to be a mentor to the team.

“If [the team] has any questions, I’m happy to help.

“I also help the women’s team too. I try to make them better.”

One thing that stands out for Qun Chai is  the straw hat that he wears every time he plays.

Elchico said, “The hat is his trademark. Players from other schools know him as ‘the freakishly good guy with the straw hat.’  Qun Chai doesn’t play without that hat and as long as he keeps playing the way he does, then the hat will stay. He rarely uses it for actual shade though.”

Qun Chai plans to transfer to Cal State Fullerton once he is done at Cerritos.