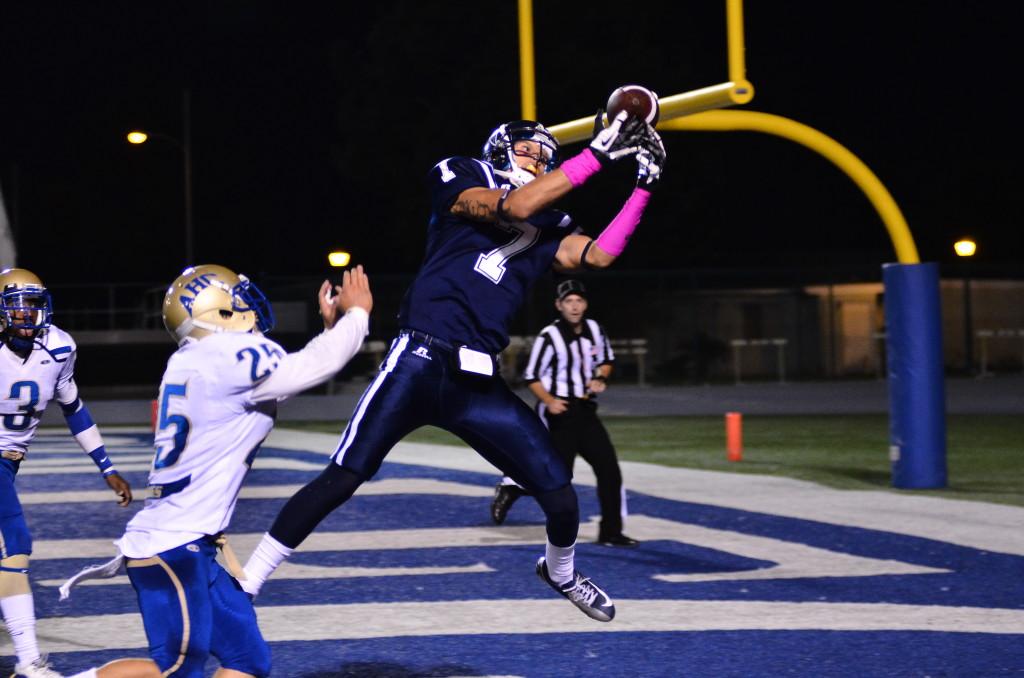 The Falcons defense held the No. 2 ranked offensive team in the state to 25 points on the evening, 13 points below its season average.

Hancock College’s offense was stopped on 9 of 12 possessions by the Falcon’s defense.

“This win was huge. We needed this win to set us up for the next few games,” Falcons head coach Frank Mazzotta said.

“It was a big challenge for us defensively. We definitely had our work cut out for us. We put our bigger (players) up front and we made sure to switch them out to keep them fresh.”

Cerritos College held Hancock College running back, Cameron Artis-Payne, who is a three-time conference player of the week, to 135 rushing yards, with 19 of those gained in the second half.

The Falcons stopped Artis-Payne at about 65 rushing yards below his per game average.

Artis-Payne currently leads the state in total rushing yards at about 200 yards per game.

“I have to give our defense praise,” quarterback Morgan Fennell said. “(Our defense) kept Hancock out of the endzone so (our offense) could put some points up. We knew this was going to be a battle over whose defense would stop whose offense.”

Falcons offense was also effective against Hancock College, who allows 35.5 points on average per game. Cerritos College passed that mark by about 20 points.

On the opening drive, Cerritos College used a no-huddle offense that it has found success with in the past few games.

The Falcons mixed up their attack with quick passes and short runs to move the ball down the field.

Within the first two minutes of the game, the Falcons offense found itself in the red zone.

“We decided to go no-huddle to attack (Hancock’s) defense,” Fennell said. “We wanted to get on top of (Hancock) quick and demoralize (its players).”

Fennell then handed the ball to running-back Dominique Small, who ran for three yards into the endzone uncontested by Hancock’s defense.

The Falcons then took advantage of Hancock’s defense by getting the two-point conversion on a short pass to tight end Andrew Buenrostro.

Hancock was unsuccessful on its opening drive by missing a long pass and gaining short in multiple runs. Falcons stopped the Hancock offense on its 36 yard line.

Cerritos College found success two drives later by pushing the ball down the field with a series of effective passes and short runs.

Fennell then found tight end Tyler Carrillo wide open in the left side of the endzone.

Hancock College held possession into the second quarter and found success when quarterback Brandon Jefferies landed a pass into the arms of wide receiver Nicko Shellow under heavy Falcons coverage for the touchdown.

Three possessions later, Cerritos College moved the ball 25 yards before a Hancock player picked off Fennell at the 45 and ran in for the touchdown.

Hancock College missed the extra point but closed the gap to 15-13.

Abeyta caught the ball, stiff-armed a Hancock player, juked another and dove into the endzone to escape two pursuing defensive players.

Cerritos College led 21-13 after the first half.

Hancock College took the first possession going into the second half. On 3rd and 8, Jefferies threw what looked like an incomplete pass as the ball slipped through the arms of his receiver and bounced off the ground and directly back into his arms.

One referee, who had a clear view on the play, called the pass incomplete, but the other referees overruled his call.

The play resulted in a first down in Falcons territory. Ultimately, Hancock would run the ball into the endzone.

Hancock College went for the extra point but a Cerritos College special teams player blocked the kick and another recovered the ball and returned it to mid-field.

Off-setting penalties would kill the play.

Cerritos College attacked again on its next drive. Fennell threw the ball through the arms of three Hancock defenders to Abeyta for the touchdown.

On Hancock’s next drive, the Cerritos defense would hold it to a three-and-out.

“We had a lot of penetration,” defensive tackle Kyle Peko said. “We played on (Hancock’s) side of the scrimmage line. I feel like we were a tougher, more prepared team.”

Hancock went for the punt, and again, the kick was blocked. Free safety Jonathan Taylor would then recover the ball and run it to the 4-yard line.

Subsequently, Fennell would sneak in for the touchdown.

“It wasn’t planned, it was a reaction,” Fennell said.”

“We had a guy open but I had a defender in my face. I had a safe route into the endzone so I went for it.”

On its remaining possessions, Cerritos College went into ball control by switching its offense to mostly executing running plays, aiming to run the clock out.

Still, Cerritos’s rushing game was too much for Hancock.

Cerritos moved the ball on its next possession by running the ball. Fennell then found wide receiver Darion Manning, who caught the ball for the touchdown.

In the final seconds of the third, Hancock answered back with a pass, getting the ball over to Shellow, who was a step too quick for the Falcons defender, and completed the play, scoring a touchdown.

Hancock then missed the two-point conversion.

Cerritos led 42-25 at the end of the third quarter.

Cerritos College would continue to run the ball to waste the clock in the fourth quarter and score two additional touchdowns.

“It feels really good to get the win,” Fennell said. “It gives our team confidence. It’s not like we couldn’t win at home. We just needed to do it.

“We didn’t make too many mistakes and we made some big plays. When we don’t make mistakes, we’re unstoppable.”

The Falcons have won three straight games, and hope to ride the momentum this weekend as they face the undefeated Ventura College team which currently holds a 7-0 record.