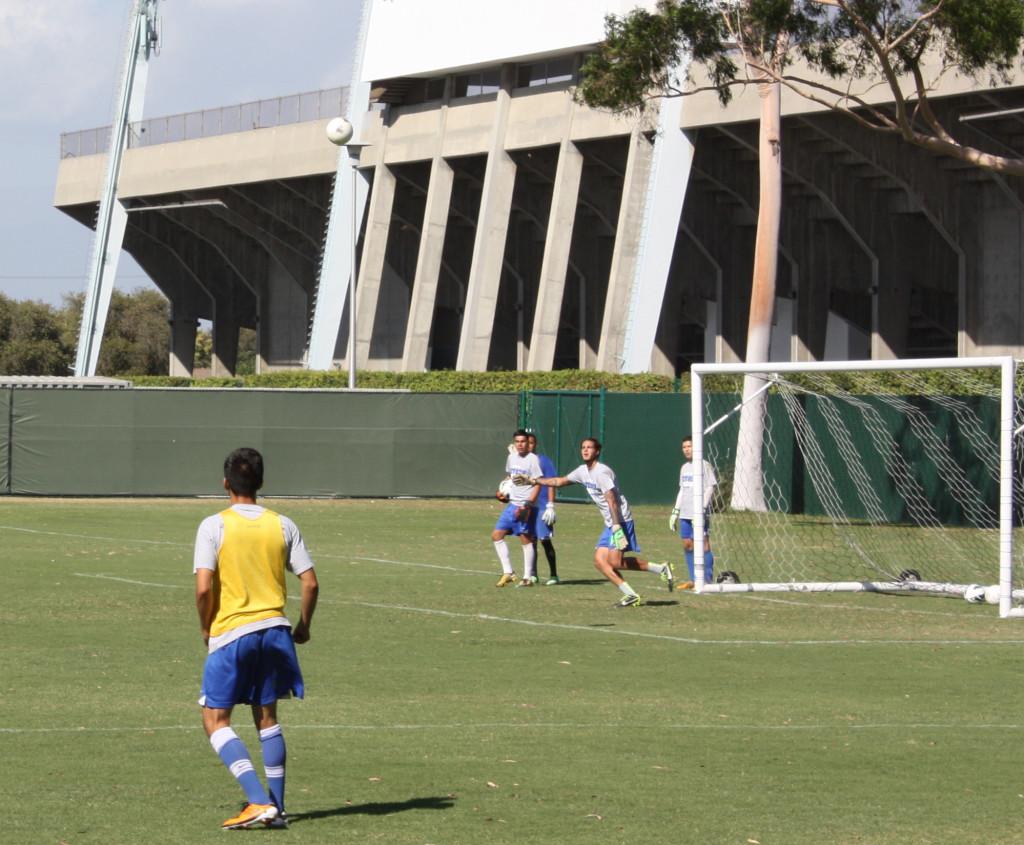 Freshman goal keeper Thomas Yeandle charges out of the net to get the ball in a cross drill.

The Cerritos college men’s soccer team lost against Taft College 3-1 Tuesday, Sept. 24 in an away contest.

The team had an 11 day break the next game and that might as well have been a catalyst to the defeat.

The Cougars were the first to strike as they opened the match with one nil. Then again, the Cougars snatched another opportunity as they scored 2-0 against the Falcons.

Freshman goal keeper Thomas Yeandle withheld the attack to the net as long as possible but was not able to hold the line for long as the Falcons hit back in the dying ambers of the game in a 76th minute goal by Freshman midfielder Juan Ochoa, assisted by Juan Ramirez.

Cerritos college played without a handful of the starters and were rushed into the game with cold feet.

Head coach Benny Artiaga explained that traffic was an obstacle as it caused a 15 minute delay and did not reach the pitch early enough to get a good warm up in.

“We really had a bad start to the whole game,” Artiaga said. “No excuses you know, we showed up there, we got warmed up as fast as we could and got into the game.

The lack of focus and proper pregame preparation is what Artiaga believes led to the team’s downfall Tuesday.

“Someone lost their mark in the back,” Artiaga went on to say. “The kid put the ball away.”

Artiaga said that in the first half, Taft had the lead and kept it there until the second half when the Falcons put one away.

Any glimpse of hope was put down as Taft was awarded a penalty kick in extra time.

The attack from the back was not the strongest in the match and the Falcons continually gave possession of the ball away.

“It was a really small field; kids need to make the adjustments sooner,” Artiaga said.

Given the short length of the playing ground, long balls and chipped passes glided over defensive lines and reached attackers at a higher and more accurate rate. Small sprints would not seem so small as the goal mouth was reached in a short amount of time.

Sophomore Benito Gonzalez said the game was bad, “We didn’t have our players, we weren’t focused enough.”

With the main bulk of the Falcons men’s soccer team absent, the game rested in the hands of the few who were not prepared to face Taft.

Gonzalez was victim of a sending off do to a one on one challenge that caused the penalty kick.

The team wishes to correct past mistakes and be a more effective unit in its away match against Los Angeles Harbor college Tuesday, Oct. 1.