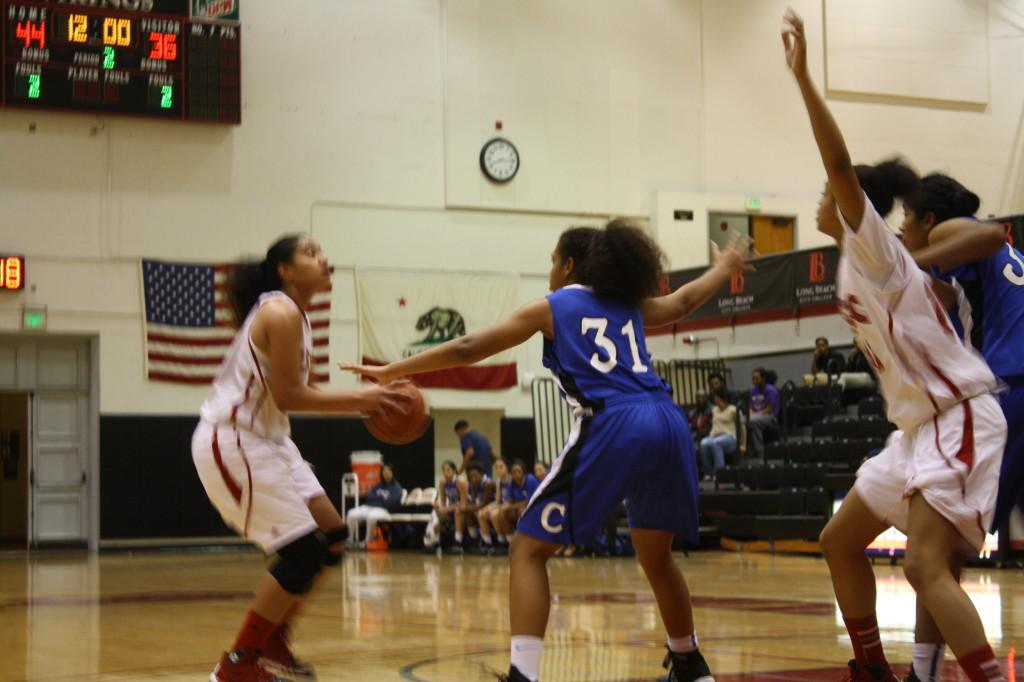 Sophomore forward Nia Lateju is on the defensive. The win was not easy for Long Beach as the falcons gave it all they had even to the final buzzer.Photo credit: Akeem Ivory

The Cerritos women’s basketball team suffered a loss against Long Beach City College Friday, Jan. 17 and had its streak snap at just 3 games.

In the first half there were many factors that led to the loss. From losing the turnover battle 11 to 6 and being out rebounded by 23 to 2; it lead to some second chance opportunities for the Vikings.

At the end of the first half it was 30-21 Vikings, the game was slow and drew out boxing matches up the defense from both teams.

This proved that the game had a close end coming down to the last shot. The second half promised more explosive action with the two teams going deep into the playbooks to find that haymaker that could throw the opponent off balnce and seize control of the game.

Starting point guard Priscilla Valdovinos was the leader that pushed her team that kept team fighting for the win. Valdovinos showed to her team that LBCC was not an intimating factor as she was persistent in trying to drive the lane for a contested lay-up and a foul or kick out for a corner three.

The second half was a lot more explosive for Cerritos looking to battle back from a very manageable 9 point deficit, as they jumped on LBCC early with a 9-4 run in the first minute and a half.

The team was just clicking with improvement in rebounding on both sides of the ball, early ball pressure to force mistake for easy transittion baskets, block a few shots and better shot selection as the jump from 31% in the fist to 40% in the second.

Unfortantily for Cerritos the closer the game got the more LBCC was able to create a run of their own to hold on the lead and evently win the game 59-46 and snap the win streak the team had.

Headcoach Welliver the teams willingness to fight. “Oh I didn’t have to say anything. They say it to each other, they’re fighters,” Welliver said, “They knew we were going to keep battling because that who we are.”