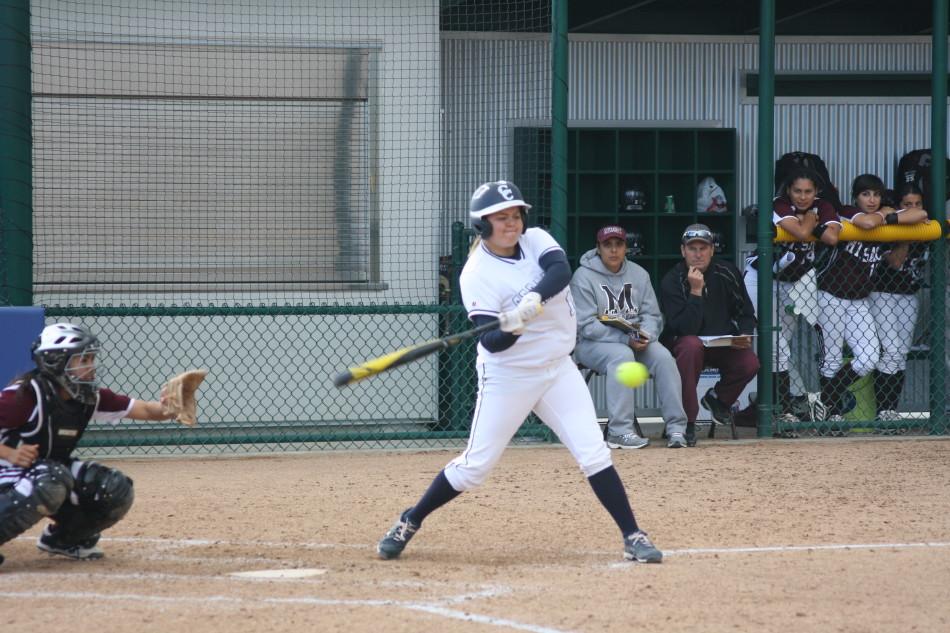 The Falcons sent right handed pitcher Jamie Ramirez out to face Mt. SAC. Ramirez struggled out of the gate giving up
three runs, on four hits in the first.

Ramirez would get the Falcons on the board in the bottom of the second with a solo home run into center field, this
would account for all of the Falcons’ offense for the game.

After the game, sophomore center fielder Arianna Hernandez shares her thoughts on the game.

“Well yeah we had a tough game. I think it’s because we’re all tired,” Hernandez said.

According to Hernandez, Mt. SAC is a good team, but a lot of things seemed to be going in its favor on this day, perhaps even the calls made by the umpires.

Hernandez concludes by talking about what the Falcons need to do to get a bounce back win.

The Falcons offense would collect only four hits on this day. Freshmen right fielder Joanna Peruccio delivered one of the four hits and made a strong case for a second single, but the umpire called her out on a close play at first.

“Well I’m disappointed. I don’t feel we came prepared and things didn’t go our way so it’s over now and we’re moving on to the next game,” Peruccio said.

Peruccio says she felt safe on her drag bunt attempt in the bottom of the third, but sometimes things just don’t go your way and it seemed that way for the Falcons on this day.

Peruccio concludes by talking about the next game. “It’s going to be a tough game tomorrow and we’re going to go work hard and get the job done,” Peruccio said.

Ramirez would exit the game after five innings and giving up eight runs (5 earned, 3 unearned); on 11 hits, two strikeouts and one walk dropping her record on the year to 12-6.

The Falcons came into the game having one a whopping 19 of their last 21 games with an 8-1 record in conference play, including two wins over Mt. SAC.

Head softball coach Kodee Murray talks about the game. “Mt. SAC came to play and jumped right on us and we didn’t respond and if we don’t respond against a good team it’s hard to do anything,” Murray said.

Murray says her team simply just didn’t show up and you don’t win games against good teams by not showing up.

“Our team has to figure out what they want out of this because it’s their team and we’ll work together as hard as we can but the bottom line is they have to want it,” Murray said.

Murray concludes by saying that her team is really fatigued after playing so many games in a certain amount of time at this point in the year and that rest should help get them back on track.