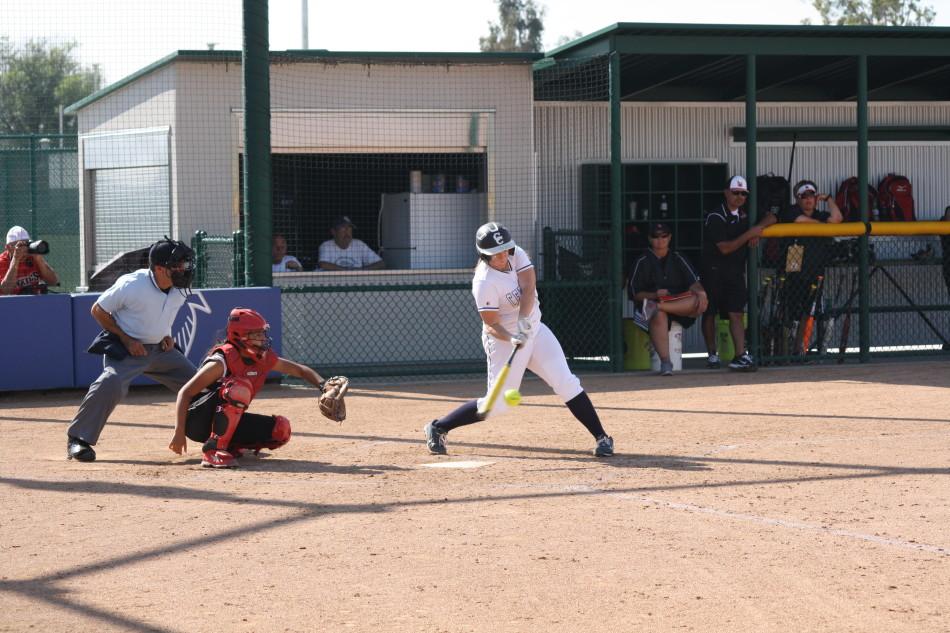 Sophomore right hand pitcher Jamie Ramirez took the mound for the Falcons and threw four impressive shutout innings, surrendering only one hit and one walk, while striking out one.

The Falcons were able to get on the board early in this one as they put up a three spot in the first with the big hit coming on a two out double by freshmen catcher Krystal Purkey.

Purkey would finish her big day at the plate going two for three with two doubles and two RBIs. After the game, Purkey talks about the win.

“I think we all did really well. We all performed as a team and we all got the job done so we got out in five,” said Purkey.

Purkey concluded by saying that it was a good day for the Falcons defensively as well and this is evident with no errors on the board. As the game went on it the Falcons relentlessly beat up on the Vikings, taking advantage of the many mistakes made by LBCC.

In her postgame statement, head softball coach Kodee Murray talks about her team exploiting every mistake.

“I feel like our team came and took advantage of every little thing that went wrong with Long Beach,” said Murray.

According to Murray, the Falcons answered every time LBCC made a mistake by cashing in on second opportunities and in softball you can’t give good teams extra outs.

Throughout the game, the battery of Ramirez and Purkey sat down Viking after Viking. To many at the game, the outstanding battery work might have gone seemingly unnoticed due to the high scoring output, but not to Murray.

For the most party Murray says her team came ready to play and battle on this day. Toward the end of the game, the Vikings made a pitching change brought in right handed pitcher Mary Gonzales who proceeded to hit the first batter she faced.

At first, it appeared the hit was intentional, but as the game went on, Gonzales continued to pitch in an erratic fashion.

Murray concludes by talking about the play.

“I don’t know. She was really wild. It looked that way, but she was so wild throwing that you don’t know if she was throwing at her or not,” said Murray.

The Vikings hit a few balls really hard in the game, but time after time the Falcons made a big defensive play to keep LBCC at bay.

One of these plays was made by sophomore center fielder Arianna Hernandez. Hernandez ran down a fly ball in the left center field gap in the fourth with a runner a first, which would have put LBCC in a prime position to get in the game.

Hernandez talks about her performance after the game.

“I think I did ok. I think I didn’t really play up to my potential but my team backed me up,” said Hernandez.

Despite feeling she could’ve done better, Hernandez concludes by acknowledging that all that matters is getting a victory in the win column.