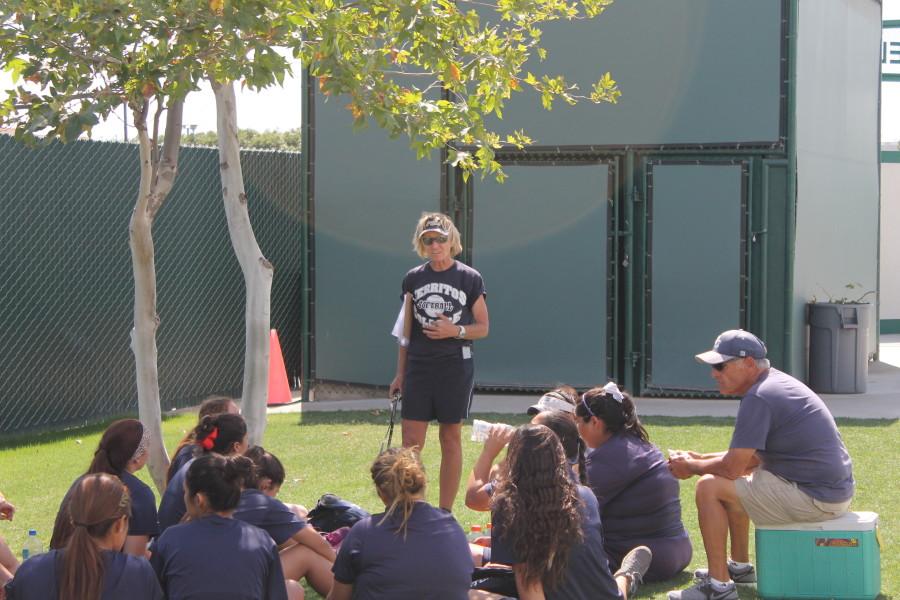 Head softball coach Kodee Murray having a meeting with her players after practice on May 1.

Cerritos College head softball coach Kodee Murray has been coaching softball for many years. This year, she led the Falcons their seventh playoff appearance in her 13-year tenure.

Humbled, Murray acknowledges that even though she has taught and led many players under her watch to great feats, she is very proud of the players on the field.

“It’s on my record (the 400 wins), but it has been the players that have come through the program that have come and fought and done those things and the 400th win stood for all the former athletes that helped to achieve that,” said Murray.

According to Murray, when she first came to Cerritos 13 years ago Cypress and Long Beach were the local softball powerhouses so it was a slow growth to improve the program.“Long Beach the coach over there helped and sent a couple of players over that she was going to cut and those wound up being some outstanding kids.”

Every athletic program is unique in its own way, but the Falcon’s softball team has a work ethic unlike any other, “The big thing is being accountable for what we need to get done and having pride in our field,” Murray explains.

Murray also elaborates on the fact that many players that come through the program often come back to hangout and help out anyway they can.

Out of all the great moments Murray has had as a coach and a player in her life she thinks the best one was when she got to coach alongside her father.

“I think getting the opportunity to coach with my dad has helped me as a coach and by helping me as a coach I think I’ve been able to help the student athletes that have come through the program to reach their potential.”

Murray mentions that her father has a demanding style as a coach and emphasizes the fundamentals and basics of the game.

She took this coaching approach from her father and implemented it in her own style. “I think my forte with each group that comes through is that I can move the team into becoming a team and wanting to fight for each other,” said Murray.

She believes that despite all of the success on the field, the true success is off the field as the student athletes become contributing members of society.

She means a lot to her players, being there for them off the field as well as on as sophomore first basemen Haley Whitney. “I think what coach has that most coaches don’t have is more of a personal level not just that coaching level. She’s there for us off the field not just on the field,” Whitney said.

Whitney isn’t the only player that has this type of relationship with Murray. Sophomore outfielder, Danah Vasquez, also has great off and on the field relationship with coach Murray. “Coach has taught me that no matter what stay true to yourself and don’t change anything that you’re doing just because someone else might say to change it.”

Vasquez also acknowledges that Murray emphasizes that importance of having integrity and good moral character.