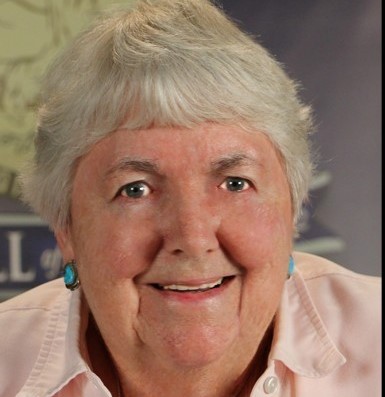 “She lived and then she died.”

At least that’s how softball head coach Kodee Murray puts it. It’s an obvious observation, but the more you look at it, the more appropriate and enlightening that statement becomes.

And enlightening is one of many ways one would use to describe legendary coach Nancy Kelly.

She was 78-years-old. Her contributions to Cerritos College athletics yields more than one-fourth of her life. Kelly could easily be called the mother of coaching on campus; being the first women’s basketball coach and logging in 22 years as the softball coach, per Cerritos Falcons.

Kelly coached the Falcons to a State Championship in 1978, going undefeated in the conference that same year and earning a multitude of playoff victories in her tenure; she’s the winningest softball coach in the history of Cerritos College.

It takes a single trip to the softball field on campus to see her mark on the sport – literally, as the field is named in her honor, an honor bestowed upon her back in 2001.

She was later inducted into the Cerritos College Hall of Fame last March.

In lieu of athletic accolades, she set up the Nancy Kelly Scholarship – it pays for a student-athlete’s textbook costs upon transfer, with, typically, about a couple of students selected a year; and not one of those selectees in the history of the scholarship has failed to graduate, as Murray notes.

“There’s pressure to it. You don’t want to be the first not to get your degree,” Murray said.

An on and off-campus contribution, just Kelly’s “being there” influenced years and years of softball teams and students; her presence, “revered.”

On the field, Kelly was making noise, in spite of retirement.

She attended roughly 10 games a season, according to Murray. Her support went beyond just simple presence, as she would donate about $10,000 a year to help maintain the field; and, throughout the years, was beneficial to adding the luxuries, such as seats for bleachers and a snack bar.

This made Kelly into an icon of sorts amongst the players.

“I think what happens is when you have people that continually support your program, they become a big deal; every single kid that has gone through our program knows Nancy Kelly and visited with her and have their own personal relationship with her,” Murray said.

A long standing memory for Murray was in 2008 – 30 years apart from Kelly leading her team to the State Championship, Murray was doing the same. Kelly was there to witness it. The touching moment came when one of the center-fielders went out of their way to grab the game ball and run out to Kelly to hand it over to her.

Murray said, “I think that moment kind of exemplifies her whole presence to the program, and that she meant something to those kids. She didn’t have to be there everyday to do that, but she had an impact wherever she went.”

And that impact followed all the way to the classroom.

Coach Debbie Jensen said, “As successful as she was for softball, she was just as successful in the classroom and touched the lives of thousands of students.They loved her as a health teacher.”

Janice Cole, foundation treasurer, added, “She absolutely loved her students. Not only the students that she personally coached or taught in health classes, but students after she retired. Because she kept up on the program with Kodee Murray, she kept up with the kids; they e-mailed her, they maintained contact with her and shared all their great successes.

“She was absolutely an advocate for education.”

Kelly battled breast cancer. An insight shared with players at the beginning of a softball season.

As a response, all season, the team switched out removable Nike logos from their shoes, and changed the coloring to that of pink – a color that supports and shows awareness of breast cancer.

The breast cancer, however, served as a complication. Kelly was eventually hospitalized for another reason – pneumonia.

“With that news, I thought, ‘Well, maybe we can battle.’ You know. You’re not thinking that’s a death sentence by any means,” Murray said. “And, then, they told me that there were more complications than that. That her body was compromised because of the cancer and all the chemotherapy and radiation. And that she wasn’t going to make it.

“When I heard that news, it was shocking. I still didn’t believe it. I was told she had three or four days. And within 24 hours, I got another phone call from one of her former players letting me know that she passed.”

“The relationship was pretty special to me. I can’t speak about her, but I know the opportunity to get to hear her stories and listen and her energy and her smile; she was so happy every time she walked out onto that field. She was so happy to see her legacy and what she built was continuing. I think we had the same mindset to help the kids; That they are our priority over winning … when we saw each other we were on the same page.”

A ubiquitous lifestyle now simmers into calmness with Kelly’s death; yet the result ends up being appropriate.

Murray went on to rave about Kelly’s final year being as “special” as it could have been, highlighting the hall of fame induction earlier this year. Murray was there, along with former coaches and players who were alongside Kelly throughout her 78 years of life.

“She was a person who wanted to be up and alive and living,” Murray said. “And if she couldn’t be that, I think she died the best death that you could die. I only wish I could do that. I hope that’s the way it is for me.”

It’s almost as if the hall of fame coach went out on her terms.

“She got to do it. She got, to me, the greatest gift in the world,” Murray concluded.

Her life will now be celebrated with a memorial service Saturday, Aug. 30 at 10 a.m. at Nancy Kelly field.

A donation can be made to the Nancy Kelly Scholarship at the Cerritos College foundation website (http://cms.cerritos.edu/foundation/).